Share All sharing options for: The Same Play, Different Personnel, and Different Results

I made a bold prediction during preseason that I thought Weslye Saunders would not only make the team, but that he would become a bigger part of the offense than David Johnson by the middle of the season.  Saunders is one of those freak athletes who has body control and agility for a guy who is considered to be too big for that type of mobility.  Saunders went undrafted, but it was not because he lacked talent.

After a huge junior year with the South Carolina Gamecocks, Saunders was suspended and removed from the team for violating team rules.  Those violations included receiving improper benefits from boosters.  That's not exactly a big deal, in my opinion, for a college kid who was likely struggling with financials anyway.  Saunders missed his entire senior season and was eventually granted the right to enter the 2011 NFL Draft.  Without tape for an entire year, every team in the NFL shied away from spending a draft pick on a "unknown" player.

Needless to say, I was extremely pleased when the Steelers picked him up as a UDFA and brought him to camp. Twitter was a buzz about his physical talents and high ceiling.  When he showed up to camp, many Steelers beat writers remarked on his impressive physical stature.  Then, when he got on the field they "ooh'd" and "aww'd" at some grabs he would make.  Eventually, he beat out a few other TE prospects and took former Steelers TE Matt Spaeth's roster spot.

Where am I going with all of this?  Well, we all know the Albert Einsten quote, "Doing the same thing over and over again and expecting different results is the definition of insanity."  Therefore, many of us on BTSC would consider Offensive Coordinator, Bruce Arians, downright insane.  He often does the same type of plays over and over again, only to watch the same failed results.  But, sometimes, just sometimes, maybe an old dog can learn new tricks.

There we were, very late in the Ravens game last week with a 4 point lead.  We had the ball, and all we needed to do was string some first downs together to run out the clock and send the Ravens packing back to Murdermore (I can say that, I'm from there).  The idea is to go to high percentage plays and keep the clock running while making a good effort to get the first down.  The most important thing is to keep the clock running. 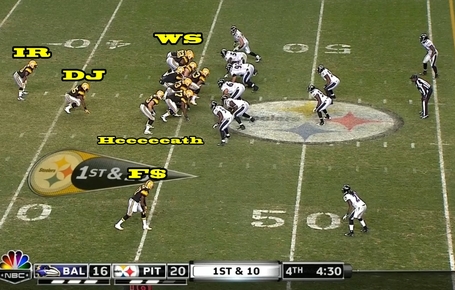 The Steelers set up with a heavy line, bolstered by a TE on each end.  Isaac Redman is in as the HB with David Johnson as the FB , just off kilter of an 'I' formation, with one hand in the turf.  A quick key F$ = Mike Wallace, IR = Redman, DJ = Johnson, WS = Weslye Saunders, and Heeeeath = Heath Miller. 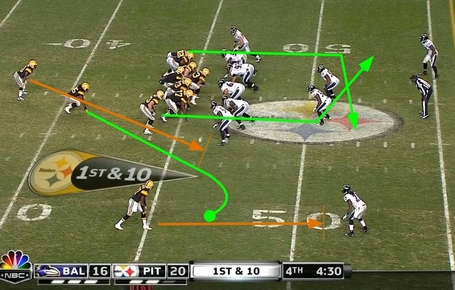 The play is set up as a high percentage screen.  There are some important things I want to pout out here though. First of all, both of the other TEs run crossing routes as distractions for the safeties and LBs.  Mike Wallace does not even pretend like he is going to run a route and goes directly for the block.  An interesting note, Johnson curls outward instead of in.  I am not sure if this is by design, just a natural move by Johnson, or if the rub off block he does forces him to.  Anyway, you know the result.  Johnson drops an easy catch that probably would have gone for 5-8 and the clock stopped. 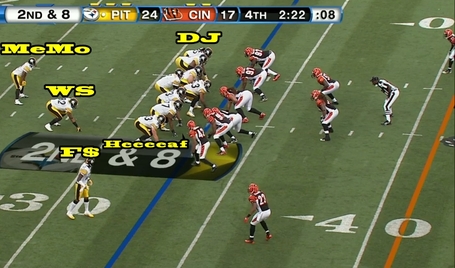 Fast forward to the Bengals game.  The Steelers are again ahead, late in the game, trying to waste away the clock by getting first downs and running high % plays.  Here is where you could call BA insane, he calls almost the exact same play that failed against the Ravens, a screen to the TE/FB.  However, BA has switched up a few things this time.  Most notably, is that Saunders is now in as the FB.  We also have Mewelde Moore instead of Redman, but both did a great job blocking so the difference is negligible. 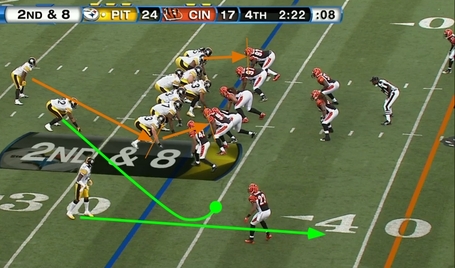 The other important differences are that neither of the other TEs runs a route.  They both stay in to block, even though the defensive alignment is almost exactly the same (Baltimore had the overload blitz on the other side of the line).  Furthermore, Wallace goes deep and does it fast.  He takes his CB and safety with him.  Saunders does not get a chip on the blitzer who is picked up nicely by Redman, and he curls inward on his route. 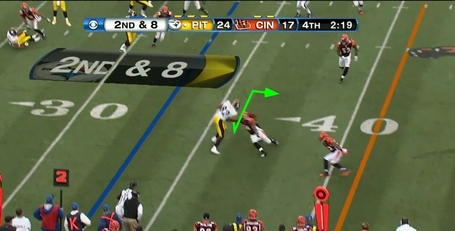 After the catch is where Saunders displays his athletic gifts.  Saunders makes a quick jab step and makes LB Rey Maualuga (58) look silly. 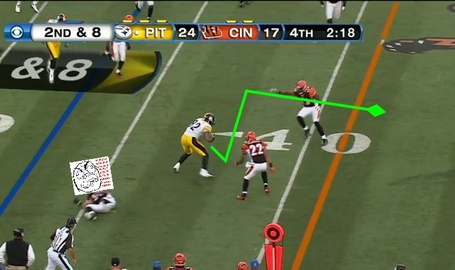 Saunders is not done yet, and throws another quick stutter step to get past CB Nate Clements (22) and LB Thomas Howard (53).

There you have it, more young players making big plays for the Steelers this season.  Now, I am not saying that Johnson should find himself on the bench, because I think he has a lot of value as a blocker.  However, I do think that Saunders should start getting a lot more looks.  Plays like this one will only build his confidence and accelerate his development as a TE for the Steelers.