Play of the Game: Critical Third Down Conversion Sets Tone in Steelers' Week 10 Win Over Bengals

Share All sharing options for: Play of the Game: Critical Third Down Conversion Sets Tone in Steelers' Week 10 Win Over Bengals

The Steelers struggled to protect its quarterback against a talented and deep Bengals defensive line. They allowed five sacks and a ton of pressure, but Steelers QB Ben Roethlisberger made plays when he had time. And that was in spite of a broken thumb he received during the game.

This example of the play he and WR Antonio Brown made on a 3rd and long situation is an example of the explosiveness of this offense, and how it only needs one chance to burn even a good defense.

Pittsburgh has the ball 3rd and 19 from their own 15.5 yard line with 5:00 left in the second quarter after Cincinnati sacked QB Ben Roethlisberger on consecutive plays. The Steelers lead 14-10, but the momentum shifted into the Bengals favor after the Steelers scored touchdowns on their first two drives. The last three plays the Steelers had run at this point resulted in an interception, and the two sacks that put them in this spot.

The Steelers desperately need a play, not wanting to give the energized Bengals offense a final look at the field before halftime.

Ben Roethlisberger is out of shotgun, with RB Mewelde Moore to his left seven yards off the ball. Brown is lined up wide left on the line. Across the line, left to right, stand LT Max Starks, LG Chris Kemoeatu, C Maurkice Pouncey, RG Ramon Foster and RT Marcus Gilbert. TE Heath Miller is a half a gap to Gilbert's right, and a step off the line. WR Jerricho Cotchery is in the slot to the right of Miller. WR Mike Wallace is on the line, split wide right.

The Bengals were putting enormous pressure on Roethlisberger on the drive, and the depth they have along their defensive line affords them the ability to rush three defensive ends in their nickel package. Left to right across the line are DE Robert Geathers, DE Jonathan Fanene, DT Geno Atkins and DE Chris Clemons. The linebackers are Rey Maualuga, in the middle, and Thomas Howard, who's on the weak side of the formation (offensive left). CB Nate Clements is in the slot about seven yards off Cotchery. CB Kelly Jennings is on Wallace, and SS Chris Crocker and FS Reggie Nelson deep on the offensive right and left sides, respectively. CB Leon Hall is on Brown. 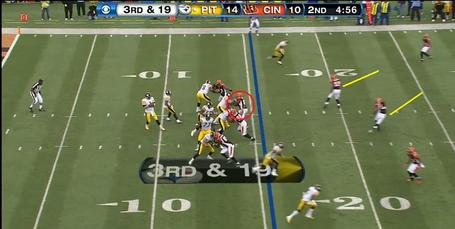 At the snap, Maualuga and Howard drop seven yards, ready for Moore's release from the backfield, or possible Roethlisberger scramble.

They are essentially allowing Roethlisberger a high percentage pass to Moore on on either linebacker in exchange for eliminating the big play.

Their real intentions are shown on the defensive line. Clemons locks up with Starks, and stunts to his left, into Kemoeatu. Atkins (red circle) is then going to stunt to his right, hoping to do two things: A.) cause confusion between Starks and Kemoeatu, B.) seal off any running lane Roethlisberger and Moore may have. 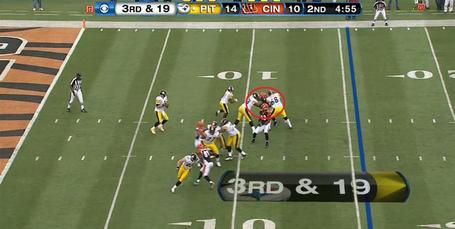 Starks and Kemoeatu both pick up the stunt very well (red circle), and the line provides Roethlisberger time to make a throw. After failing on first and second down, the offensive line stepped up nicely on this play. Kemoeatu and Starks both stop Atkins, and Starks switches off to stay with Clemons on his inside move. Moore slips out of the backfield with a free release, but Roethlisberger's eyes are down the field and has no intention of throwing short. Given the amount of time he has to throw the ball, and the talent he has in his receivers, he's going to let one of them make a play.

Roethlisberger throws it a bit high (ball in yellow) but it's an extremely difficult throw to make. Considering how tight a space he had to work in, it could be one of the best throws of the season. He was looking to get it over the linebackers, but he had to put some zip on it to take advantage of the small window Brown gained on Hall. Brown leaves his feet, stretches out and the ball bounces off his hands as Hall dives past him.

Another look at a fine grab by Brown.

The offensive line did a great job of providing protection (even if it was 6-on-4), and that gave Roethlisberger the opportunity to let Brown make a play. Despite it being a high throw, Brown's concentration helped convert a rare 3rd-and-19 situation.

Or maybe it's not all that rare.