I know, you think I am giving you old news here. Actually I am giving you very old news. The date was October 10, 1964. The Pittsburgh Steelers were preparing to play the hated Cleveland Browns, a team good enough to win the NFL championship (they did that year).

Pittsburgh's linebacking corps was decimated with injuries. Keep in mind that rosters were only 38 players back then. On one hand the players were much more apt to play through injury back then. There were no MRIs, no concussion tests, etc. Players basically played unless a body part was dangling in the wrong direction. If you got your bell rung, all you needed to do was answer how many fingers the doc was holding up, and you needed to come within two. However, there were no quick replacements when guys did get banged. You couldn't comb the free agent market - there was none. Guys who didn't make the final roster, didn't work out and stay in shape waiting and hoping to get a phone call. They went to work for their uncle's trucking company.

So the Steelers travel to Lake Erie with virtually one linebacker, Bill Saul. He was a good one, a nasty SOB who blasted the snot out of running backs. The only two other linebackers who suited up were Bob Soleau and Ed Holler, little used players who didn't play before 1964 or after. In essence, the entire linebacking unit was handled by Bill Saul, playing against Jimmy Brown in front of 80,530 Clevelanders on a 40-degree Saturday night. 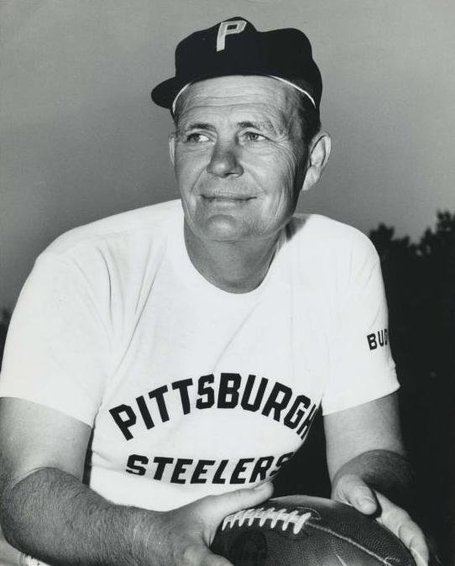 Buddy Parker had some major downside as Steelers' head coach. He was superstitious to psychotic proportions and traded away almost every draft pick for seven years. The man was, however, a brilliant tactician who could game plan as good as any coach in the league. 1964 would be Parker's last as a head coach and this game in Cleveland would be his last hurrah. He won championships in Detroit with Bobby Layne, who, ironically, retired as the Steelers' quarterback a couple years before.

Parker, without really the time or opportunity to bring in new players, decided to use the guys "in-house" and concoct a novel defense that might throw the Browns off key. Pittsburgh basically played a 5-1-5 defense, having no option with the "1." The Steelers jammed the line with big defensive athletes, bookended by Big John Baker and Ben McGee. Behind Saul, they blanketed the backfield with the likes of Brady Keys, Clendon Thomas (about to be inducted into the College Football Hall of Fame), Dick Haley (son Todd with KC), Jim Bradshaw, Willie Daniel and Bob Sherman. The backs basically doubled as linebackers, but the Browns never knew where they were going to line up and never knew who was guarding what receiver.

The Browns were befuddled and stonewalled. They totaled 96 yards rushing and more than a third of those yards (33) were gained by quarterback Frank Ryan on scrambles. The incomparable Jimmy Brown, playing behind virtually a Hall-of-Fame offensive line, gained 59 yards on eight carries. One of those totes was a breakaway 40-yarder; otherwise, he gained 19 yards on seven carries. Ryan completed 13 passes in 29 attempts for 167 yards. Other than an 18-yard TD pass to Gary Collins, the Browns did not score.

The Steelers, meanwhile, were enjoying John Henry Johnson's greatest day as a pro. He gained 200 yards on 30 carries and scored three touchdowns. Clarence Peaks chipped in with 96 more rushing yards and the Steelers racked up 354 total. Quarterback Ed Brown only had to throw 11 times and completed an efficient nine passes. The final score was Pittsburgh 23, Cleveland 7. The Steelers could not expect to change their defense permanently. That permutation 5-1-5 would be figured out within a week around the league. But for that one day, Cleveland could not adjust.

Fast forward to November 2011. Again, the Steelers face their hated rival with a depleted linebacking corps. Instead of Buddy Parker, we now have Dick LeBeau. Don't be surprised, Steeler Nation, if the mad scientist goes into his laboratory and whips up a new-wrinkled defense. Don't be surprised if he combines his stealth defensive line with a vastly improved secondary to show the Baltimore Ravens something they haven't seen and something they cannot expect. Don't be surprised if Coach LeBeau goes back to look at that 1964 tape (OK, I doubt that). He may show some wrinkles and looks that might not work permanently, but maybe, just maybe, they might work on a given day.