Giving Thanks for the Pittsburgh Steelers

Share All sharing options for: Giving Thanks for the Pittsburgh Steelers

We often substitute the word "necessary" for "important," when actually, the two words are quite different.  When a spouse wants to spend money on something we think might not be a priority, we ask, "is that really necessary?"  Such a question is a cheap shot.  When we think something is unimportant, we ask if it is necessary.  And while only a handful of things in life are by definition, "necessary," many more things are important.  Importance is in the eye of the beholder.  To some, sitting in a chair and reading books, while certainly not necessary, is important.  To others, playing golf is a great joy in life and therefore, important. The list goes on.

Are the Pittsburgh Steelers necessary?  Of course not.  Are they important?  You betcha.  They are important because we deem them to be important, and we have that right.  When the Steelers win, the air is cleaner, food tastes better and waking up in the morning is a better experience.  I'm not going to apologize for that.  And I respect Uncle Bob when his backyard garden is his pride and joy.  Is it necessary?  Of course not.  Is it important?  You betcha.

Some of our rivals snicker that we think the NFL began with the Immaculate Reception.  As an historian, I admit they have a point.  Fans of the Packers, Browns, Bears and Giants especially, can point to great success prior to the NFL-AFL merger.  They are correct, but the fact remains that with far fewer teams to compete against, every team experienced some success against those fewer competitors (except Pittsburgh, but that is a story for another day).  When the merger came to be in 1970, the new NFL found itself with 28 teams.  Winning a championship with 28 teams is geometrically more difficult than winning a title among eight or 12 teams.  Simple math.  Suffice it to say that beginning in 1970, playoff success in the NFL became significantly harder.

From that backdrop, the Pittsburgh Steelers have given their Nation more to be thankful for than any other NFL franchise.  They have constructed 30 winning seasons in 41 years - a remarkable 73 percent.  Considering the NFL's inherent system of helping the poor get richer and the rich get poorer (reverse drafting of talent), to sustain that high of a winning percentage is incredible.  If you consider that Pittsburgh went 8-8 in two of those seasons, that makes 78 percent of the time the team has not had a losing season.  Think about that.  Also consider that only twice has Pittsburgh won as few as five games and never fewer.  Four times in their nine losing years the Steelers have gone 7-9 or 6-8 - a game away from non-losing.

No other NFL franchise can come close to those numbers.  The Dallas Cowboys and Miami Dolphins have had 29 winning seasons (second place), but they bottomed out a few years, including one-win seasons.  Pittsburgh bottomed out at 5-11 in 1988.  Next we look at conference finals fours.  Again, the Steelers are at the head of the class, reaching the AFC final four 22 times.  That's more than 50 percent folks.  More often than not, over the span of 41 years, the Steelers are playing for a trip to the conference finals.  That is difficult to believe.  I had to check the numbers twice, it seemed so unbelievable.  Again, the Cowboys come in second with 21 conference final fours, a tribute to their greatness as well.  The Vikings and 49ers are tied for third with 18.

The next step is conference runner-ups.  Who leads the league?  The Steelers, of course, with seven (tied with the 49ers and Raiders).  When it comes to conference titles, Pittsburgh sits again at the top with eight (tied with Dallas).  Super Bowl Titles?  We all know that score. 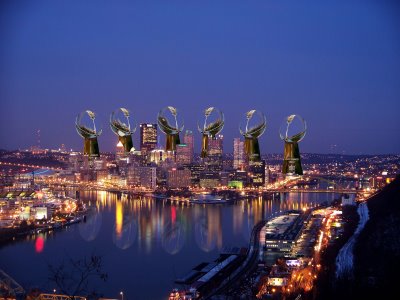 Every step along the way, the Pittsburgh Steelers lead the league in success, since that 1970 merger.  For funsies, I decided to assign one point for every winning season, two points for a conference final four, three points for a conference runner-up, four points for a conference title and five points for the whole enchilada.  Of course, the Steelers came out on top, having won each individual "title," and point-wise they accumulated 158 points.  Dallas is second with 146 points, the 49ers have 126 and the Raiders have 105.  No one else has triple digits.  Numbers aside, all you can ask for as a fan is to have a chance, to be in the hunt.  Since Mike Tomlin came on board in 2007, the Steelers have never played a regular-season game in which they were eliminated from the playoffs.  Only New England can also make that claim.  That's 64 games (not counting this year) and every one of them had playoff implications.

As fans we often bemoan the heartaches.  We anguish over weaknesses of the team, as if it is possible in this league of salary cap and parity not to have them.  We insist we can call better plays, with our handy convenience of hindsight.  We rip players for not being in the right place and coaches for not putting them there.

But on this day, and hopefully going forward, I am not going to do any of those things.  I am going to be thankful for the team's record-setting success over the course of four decades.  Are the Pittsburgh Steelers necessary?  Is it necessary for them to win?  In the big scale of life, of course not.  But every time they win, the air is cleaner, food tastes better and I wake up happier.  Looking back through 41 years, half of an expected lifetime, my team has given me more than I deserve.  Happy Thanksgiving Steeler Nation.  God Bless you and yours.  And God Bless our Pittsburgh Steelers.