Share All sharing options for: Steelers Week 12 Defensive Plays Of The Game Highlighted By Season And Career Firsts

Pittsburgh's 13-9 win over Kansas City had its flaws. It also had a career first for a young Steelers player, as well as a season first for another, both of whom look to make a defensive impact for a long time. There's also an example of outstanding hustle and awareness from some veteran defenders. We'll even explain how the mere presence of a certain linebacker can cause a veteran tight end to break off his assignment.

We've ranked the five best overall defensive plays in Pittsburgh's Week 12 win over the Chiefs, analyzing each of them to show why they were each outstanding in their own right.

The Situation: 3rd and 10 from Kansas City's 45 yard line, 1:02 minutes remaining in the third quarter. The Steelers lead the Chiefs 13-6.

The Play: The Chiefs have four receivers at or just off the line of scrimmage, trips on the right side, and QB Tyler Palko is in shotgun with a running back to his left.

The Steelers are in nickel, with DE Ziggy Hood, DE Brett Keisel and James Harrison lined up from left to right, starting from over the nose of the center, down to outside shade of the tackle.

Worilds is over the slot right receiver, who is in the middle of their trips formation. At the snap, Worilds rushes, and TE Anthony Becht stays in to block, and gets help from RB Jackie Battle. Hood, Keisel and Harrison all rush to their inside, looking to occupy blockers for Worlids to beat his assignment to the wide side of the field.

It was a perfect play call and it was executed very well. Palko's original option is not open where he needs to be due to the excellent coverage down field. Palko is forced to step up in the pocket, right by where Worlids was initially isolated by Becht and Battle.

Palko steps up, and Worilds knocks him down. Credit to Worilds for the effort and hustle, sticking with the play for as long as he did, but this one was a coverage sack.

The Play: It's a critical point in the game. The Chiefs are threatening to take the lead in a game they have no business leading. The Chiefs are in a power formation, with double-TE, both Becht and Leonard Pope on the right side of the formation. Becht is lined up off the line, but down in a three-point stance. Palko is under center with Battle seven yards behind him.

The Steelers have Keisel, Hampton and Hood right to left, all down on the line. OLB James Harrison and Jason Worilds are heads up over the ends, right to left. ILBs Lawrence Timmons and James Farrior are joined by S Ryan Mundy about four yards off the ball and only about a yard between them.

At the snap, It's apparent Harrison's assignment is Palko, wherever he may go. He gets a free release off the line, and charges hard at Palko, who hands off to Battle.

Becht is pulling to his left, and looks as if he'll reach the hole in time to seal it off, allowing Battle to push forward. Becht sees Harrison (red arrow), however, and leans toward Palko, as if he views Harrison (yellow circle) as a major threat to blow the play up in the backfield. He tries to correct his path and stay ahead of Battle, but Battle slams into him, effectively destroying the play.

Hampton cleans it up, and the Steelers force a field goal. 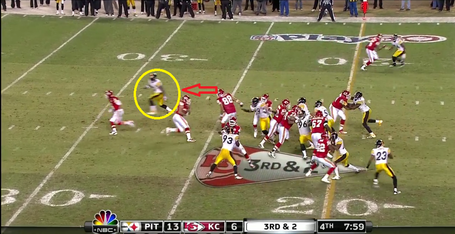 The Situation: Kansas City is on their final drive, and they've been attacking primarily out of the shotgun with a pre-snap look of trips on the right side. It's 1st and 10 from Pittsburgh's 46 yard line, and there's 52 seconds left in the game.

The Play: They aren't going deep, but rather, trying to pick away at the Steelers defense. Spreading the Steelers' nickel defense wide, Pittsburgh is countering by using a cat-and-mouse game between Keisel and Harrison. Both are standing up on the offensive left side, with Keisel on the outside, Harrison on the inside. One will rush, one will drop into coverage or stunt to the inside.

On this play, Harrison rushes straight over Albert, while Keisel stunts to the inside. Farrior trails right behind Worilds on the offensive right side, leaving the Steelers vulnerable in the secondary. It's a perfect play call for the Chiefs, looking to exploit Pittsburgh's aggression with a quick screen pass to McCluster.

Mundy flows to the outside to force McCluster back to the pursuing linebackers, but Farrior was behind the line of scrimmage, and Timmons was in coverage. Hood is pursuing the play, but likely would not get to the speedy McCluster, who has an open lane to the outside, especially with G Jon Asamoah out in front of him.

With no one on McCluster, it appears charging FS Ryan Clark would be the only one there to make a tackle before McCluster picks up a huge first down. Keisel, though, hustling all the way from behind the line of scrimmage, is able to catch McCluster, and pull him down for only a six yard gain.

It's likely McCluster could have slipped past Clark as well, and that play could have gone for a lot longer than even the 10 yards needed for a first down. An incredible effort play by Keisel, one that could possibly have saved the game for the Steelers. 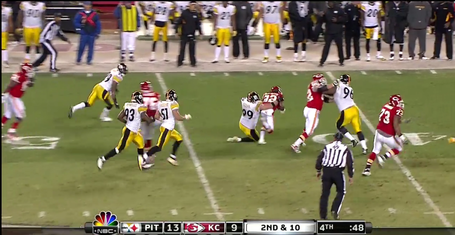 The Situation: Coming out of the two-minute warning, Kansas City has the ball at their own 45 with 1:55 on the clock. It's 3rd-and-6 with the Steelers leading 13-9.

The Play: The Chiefs are looking to spread the Steelers out, with twins on the offensive left side - Dwayne Bowe and Jonathan Baldwin. Gay has Bowe, who's on the outside, and CB Ike Taylor has Baldwin on the inside. Gay is about seven yards off Bowe, respecting the first-down marker.

Palko is in shotgun, with a running back to his right by the start of the play. The idea is to get the Steelers in man, knowing that would move Gay off Bowe. Baldwin, who has a considerable size advantage over Taylor, is used as a blocker, and if they can get the ball to Bowe in space, he may be able to make Gay miss and get the first down.

Gay, though, recognizes the quick screen immediately, and is charging hard on the ball before it's out of Palko's hand. Bowe has time to catch the ball, and nothing else, as Gay wrapped him up for a one-yard loss. 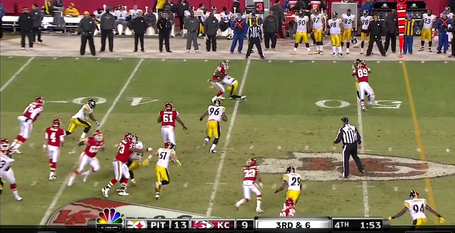 The Situation: Kansas City is moving the ball well, but a false start penalty on injury replacement LT Jared Gaither put them in a 1st and 15 spot with 38 seconds left in the game. Pittsburgh leads 13-9.

The Play: Palko reverts to shotgun with trips on his right side. Bowe is out wide to the right, WR Jerheme Urban is close to the line and WR Steve Breaston is between them. The Steelers counter with an unusual formation; DE Cameron Heyward is outside shade of the tackle on the offensive right side, and Keisel is standing up outside shade of the left tackle. Harrison is inside of Keisel, showing blitz. Hood is inside of Harrison.

At the snap, Harrison peels off into coverage, and Keisel rushes in the typical fashion of an outside linebacker in this defense. Heyward does the same thing off the opposite.

Urban stays in to block Heyward, and gets help from RB Dexter McCluster. LT Branden Albert is able to force Keisel out wide, and Palko has time to make a throw.

He does, and releases the ball to his right side, looking for Bowe. It's not a good pass, and sails a bit high. Bowe appears to think maybe there's someone deeper than him. He jumps, but doesn't extend his arm, allowing the ball to float down into the waiting hands of Lewis for his first career interception. Game over. Second win in a row sealed by an interception. 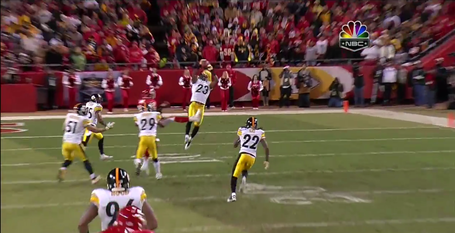