This has kind of already been played out, but the Grammatica-like leap Bengals WR Jerome Simpson takes when lightly touched by Browns LB Scott Fujita - and Fujita's subsequent reaction to it - will likely be one of the funnier moments of the 2011 season.

It's so bad, in fact, it's hard to even be upset with Simpson. 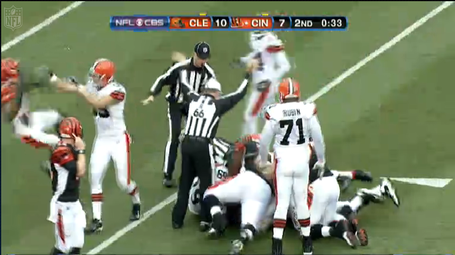 Simpson drags Fujita out of a pile by his ankle, which is entertaining enough on its own. Fujita gets up, bumped Simpson a little bit, and the force of it sent Simpson flying two or three feet in the air, and backward, outside the frame of the camera. You can almost hear Fujita scoffing him, and QB Andy Dalton - who watches the whole thing - even appears to be laughing a little bit.

There's always been a divide between American football fans and fans of the like-named counterpart sport in much of the rest of the world. Part of the reason Americans never got into soccer can be attributed to the flopping and diving players take on the pitch to earn calls from the referees.

Simpson's is easily the worst flop ever recorded on video. If that statement is false, please send me evidence to support that theory.