The Week 9 loss to Baltimore no doubt still stings, and probably will for a long time. There were a lot of positives, though. Pittsburgh's defense may have fallen short at the end, but it's suffocation of Baltimore's running game and stud bad Ray Rice was worthy of praise, especially considering what Baltimore was able to do in Week 1.

There were many stuffed runs, but one in particular highlighted the Steelers excellent preparation for this game, and showed why this is still a run defense to fear league-wide.

The Ravens have the ball at Pittsburgh's 25 yard line on 3rd-and-2. The score is tied at 3 with 10:12 left in the second quarter. This would be one of the few third down attempts where the Ravens did not throw the ball, but looking at the skill in their backfield and their offensive line, running on 3rd-and-2 isn't exactly earth-shattering.

Baltimore is lined up with an "unbalanced" offensive line, meaning they have three tackles on the line. Back-up OT Jah Reid is technically a tight end on the play, with Bryant McKinnie playing in the LG position. Reid reported in as an eligible receiver. TE Dennis Pitta is off the line, outside Reid. FB Vonta Leach is in front of RB Ray Rice, both are behind QB Joe Flacco and C Matt Birk. To the right of Birk are the two Ravens guards, Marshal Yanda and Ben Grubbs, and the end is flanked by RT Michael Oher. WR Anquan Boldin is off the line on the right side of the formation.

The Steelers counter the Ravens power formation with

CB Ike Taylor is on Boldin on the offensive right side, and FS Ryan Clark is about 15 yards off the ball. SS Troy Polamalu is across Pitta, playing about one half yard off the line of scrimmage. CB William Gay is pinched in at the corner, about three yards off the ball, outside shade of Pitta. OLB James Harrison is next to Polamalu, and he's down in a three-point stance. DE Brett Keisel is to Harrison's left, then NT Casey Hampton, DE Ziggy Hood and LB Lawrence Timmons. LB Larry Foote is about four yards off the ball, straight over Flacco. LB Stevenson Sylvester is to Foote's left, same depth. 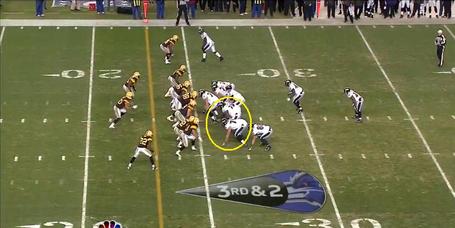 Note McKinnie and Reid (in yellow), the size they bring to the inside of the line on the strong side strongly suggests run. Leach (red) motions to the weak side (and short side) of the field, particularly away from Polamalu.

The Ravens now have the match-ups they want. Polamalu had played perfectly against the run to that point (with the exception of the first play, which was negated by a holding penalty). Whether he was on the strong or weak side, he was able to slip past blocks for the tackle, or pursue the stretch play down the line and get the ball carrier in the hole.

The Ravens used this unbalanced formation specifically to eliminate Polamalu. With Pitta lined up off the line but next to two tackles, he has Polamalu isolated, and can cut off his pursuit of the backside run, but still have Leach out in front of the run.

Reid and McKinnie can also cut Harrison off from the same thing, theoretically eliminating two of Pittsburgh's best run defenders.

Hampton and Keisel both instantly recognize the stretch run to the offensive right side, and get on Birk's and Grubbs' outside shoulders, respectively (yellow). They do to the Ravens what the Ravens hoped to do to them, gain leverage on them, and ride the play down the line.

The Ravens felt they had an advantage zone-blocking Hampton and Keisel to their right, but Pitta's block of Polamalu (red) would be the key one. Polamalu is there to prevent the cut-back, and with Pitta on a delayed block, Baltimore hoped to catch him moving out of place, and open up a crease on the backside of the play.

It quickly becomes irrelevant due to the penetration achieved by Hampton and Keisel.

The Ravens effort to open the four-hole (yellow) failed, and Foote recognizes the handoff, and immediately pursues Rice in an effort to close his cut-back options.

That leaves just the slow-footed Reid (yellow) between Harrison and Rice. Reid simply isn't quick enough to take Harrison off the line at an angle, and Harrison easily gets inside him, and has a perfect angle on Rice.

Rice's initial lane was blown up (red X) by Hampton, Keisel and now Foote, and stops his forward motion to cut back off his right foot (red circle). That puts him right in Harrison's crosshairs.

Harrison makes contact with Rice (yellow circle) two full yards shy of the line of scrimmage (blue line), and four yards short of the first down.

Rice would squirt through, barely an inch off the ground, and get finished off by a hard-charging Clark for no gain on the play.

It's a huge play in the larger scheme of the game, considering the amount of third down conversions the Ravens would get. The Steelers forced the field goal in what would be a nail-biter down to the last seconds. Billy Cundiff hit the kick on the next play, putting Baltimore ahead 6-3.

Baltimore's offensive line ran out of this formation with a large amount of success in the season-opener, but Pittsburgh's defense was prepared for it, and limited one of the game's most explosive running backs to just 43 yards on 18 carries.

If you're looking for more play analysis (or want to see if I'm completely wrong), tune into NFL Turning Point on Versus (10 p.m. ET) Wednesday. It used to be Thursdays, so now I don't have to DVR Beavis and Butthead. I'm happy about that. It's a great show for xs and os geeks like myself, plus, it's got a lot of sideline footage, and takes you pretty close to the game, as painful as this one may have been.