Share All sharing options for: Confusion Surrounding Report of Fines But No Penalties For Ravens Helmet-to-Helmet Hits

With ESPN's Adam Schefter Tweeting Tuesday, and ESPN's ticker announcement during Monday Night Football, it seems as if the NFL is preparing to levy fines on Steelers FS Ryan Clark and OLB James Harrison as well as Ravens LB Ray Lewis for incidents during Baltimore's 23-20 win over Pittsburgh in Week 9.

Per the rules of the league, it seems fines for Clark and Lewis are in line with recent league penalties.

It's unclear, though, how and why Ravens LB Jameel McClain's hit on Steelers WR Antonio Brown is not being mentioned with the others.

Fans and observers of the NFL are at a disadvantage when it comes to fines. They do not have access to the film the league uses to issue fines. Having watched the game three times since it ended Sunday night, I didn't see Harrison strike a Ravens player with his helmet - assuming that is what the fine will be for.

That does not mean it did not happen. We're at the mercy of what the NBC cameras picked up, and it wasn't highlighted by the broadcasting team.

Lewis's hit was, and it's certainly worthy of a fine. It also knocked Ward out of the game, and was later ruled an incomplete pass (even more confusing is how they came to that conclusion). It's puzzling how it didn't draw a penalty.

Per the NFL rule book, both plays should have been penalized 15 yards for unnecessary roughness.

If a player uses any part of his helmet (including the top/crown and forehead/"hairline" parts) or
facemask to butt, spear, or ram an opponent violently or unnecessarily. 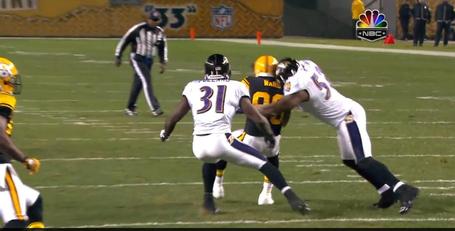 The replay shows Lewis left his feet and launched into Ward, which is also a 15 yard penalty. It occurred on a 3rd-and-7 pass, and the penalty, assuming the pass was still ruled incomplete, would have given the Steelers 1st-and-goal from Baltimore's 5 yard line.

McClain's hit on Brown came in a similar fashion as Lewis's. He struck an opposing player with his helmet. It also happened in a similar spot on the field.

The film shows McClain lowering and striking Brown with his helmet. The initial impact is on Brown's shoulder/neck area, and his helmet glanced from there to Brown's head. The rule above does not specifically refer to helmet-to-helmet hits, though. It speaks specifically to the defensive player using his helmet to strike a player.

McClain shoves Brown to the ground, where the ball pops free. It's clear Brown is at best semi-conscious when he hits the ground and loses the ball. The play is ruled an incomplete pass.

The catch likely have been ruled a first down, had he maintained possession. Without a catch, though, the personal foul penalty that should have been called would have given the Steelers 1st-and-goal from Baltimore's 10 yard line.

So in essence, two Ravens linebackers had separate illegal hits on two Steelers receivers. Both Steelers receivers appear to lose consciousness in each play, both are ruled incomplete passes. Had they maintained possession, both would have been first downs deep in Ravens territory.

While McClain isn't named in Schefter's Tweet, for argument's sake, let's say he does end up being fined. How is fining either Lewis or McClain going to prevent this in the future? Why would a highly competitive NFL player allow a catch for a first down in a competitive game if the only consequence of breaking the rules would be a 10 percent reduction in his game check?

Perhaps a better question would be why Clark picked up a penalty, and two or three others did not? Are they only issuing fines on linebackers, but fining and penalizing defensive backs?

The game played out the way the game played out, and it's stupid to suggest this cost the Steelers a win. Roethlisberger threw an interception in the red zone on a different series, so clearly, it can't be said this directly prevented the Steelers from scoring. It's equally stupid, though, to suggest the NFL is doing something to prevent what they claim to be preventing.

It's unfortunate, because it marred what was already a great football game. Fining three or four players won't make up for that.