Steelers vs. Steelers Update: How is the 2011 Squad Faring in Sacks and Takeaways?

Share All sharing options for: Steelers vs. Steelers Update: How is the 2011 Squad Faring in Sacks and Takeaways?

In my previous post about turnovers and whether forced fumbles are down because of the new league rules (or new enthusiasm for enforcement) I put in several graphs comparing the Steelers' numbers this season to the previous six seasons. Those were unexpectedly revealing, and I decided to update them as the season progresses. We've got the data from two more games to look at now, and so here they are. First, sacks: 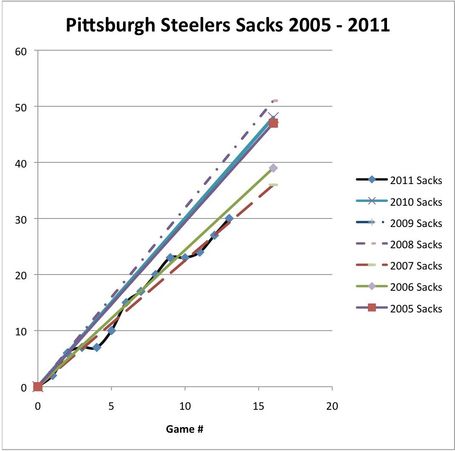 Sacks are still tracking with the two worst of the previous six seasons. It will be interesting to see if that changes if Woodley gets any appreciable playing time in the next several games. In the meantime, it was his replacement, Jason Worilds, who had two of the three sacks on Thursday night. James Harrison was a big factor in the game, but had no sacks, which just goes to show that stats often miss the importance of a given player. 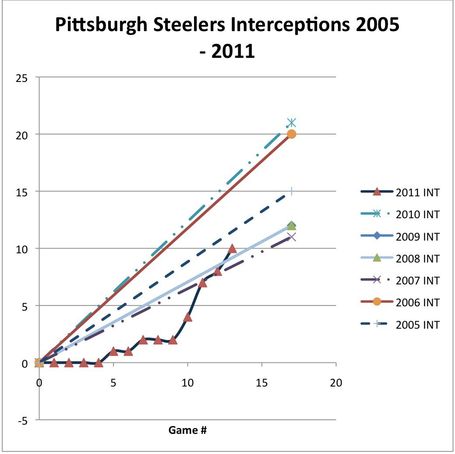 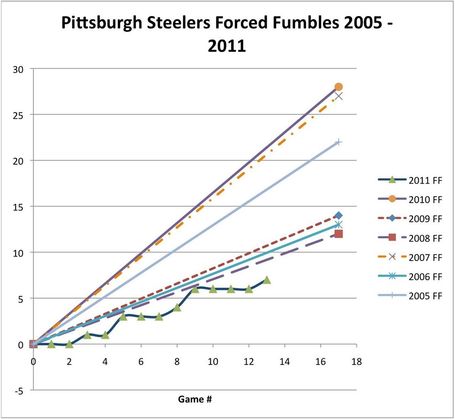 Still historically low, as you can see. It would be very interesting to talk to the players and find out whether they are playing differently because of the enforcement, and at least the perceived bias against the Steelers, or whether it is just a fluke of the game. A flurry of forced fumbles during the final games would indicate the latter; a continued dearth would indicate that maybe there is a psychological facet to this, at the least.

That's it for now. I'll update again as appropriate.