Share All sharing options for: Steelers Week 14 Defensive Plays of the Game Highlight Suffocation of Browns

Pittsburgh's defense has been on fire the last few games, and Week 14 was no exception. Surrendering just three points and 304 total yards while getting another multiple takeaway performance was perhaps overshadowed by injuries to QB Ben Roethlisberger and C Maurkice Pouncey.

There were lots to choose from, but we whittled it down to these five.

Cleveland is at Pittsburgh half-yard line on third down after QB Colt McCoy scrambled and nearly scored on second down. It's the first drive of the game, and there's 10:07 left in the 1st quarter of a scoreless game.

Cleveland is in their "jumbo" package, with three tight ends and FB Owen Marecic in front of RB Peyton Hillis. It's clearly a running formation, and the Steelers respond with six down linemen and both outside linebackers (James Harrison, offensive left and Jason Worilds, offensive right) pinched in tight at the line. 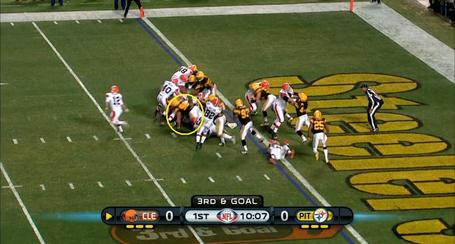 McCoy snaps the ball, and NT Casey Hampton (yellow) immediately pushes between C Alex Mack and G Shaun Lauvao. By the time McCoy gets the ball to Hillis, Hampton has already pushed Mack into Hillis, forcing him to run into the hole with his shoulders leaning toward the left. That robs him of the power he uses to be successful in these situations.

Harrison destroys TE Alex Smith, putting Hillis between Hampton and Harrison, thus creating a clear lane for Larry Foote (who rode off Harrison) and James Farrior to make the stop well short of the goal line.

Pittsburgh had just turned the ball over to Cleveland inside the red zone, and face a 1st and 10 from the Browns 28-yard line. With 12:54 left in the 1st quarter, the Steelers own a 7-3 lead.

The Browns line up in a twins left formation with two tight ends (Ben Watson, offensive right and Evan Moore, offensive left). Hillis is the lone running back.

The Steelers have three down linemen, left to right, Ziggy Hood, Hampton and Brett Keisel. Worilds is pinched in on the line off Hood's left side. Harrison shades out by the slot receiver on the right side. CB Ike Taylor is five yards off WR Greg Little on the offensive left side, and LBs Larry Foote and Lawrence Timmons are in the middle, 4 and 5 yards off the ball, respectively. CB William Gay is on the left edge. Not pictured is FS Ryan Clark and SS Troy Polamalu, who are playing a deep cover 2.

At the snap, the Steelers bring both Foote and Timmons on an inside fire blitz (both linebackers cross over each other as they pursue the quarterback), but Cleveland picks it up well. Harrison and Worilds both drop into zone coverage, and Watson and Moore run 10-yard patterns.

Moore runs a skinny post, looking to slip between Worilds and Harrison. McCoy finishes his five-step drop, and is eyeing Moore the entire time. He may have had a chance to zip a pass between Worilds and Harrison about six yards down the field, but he hesitates and waits for him to clear them. Watson is also a step slower than Moore is, bringing Gay closer to the play's intended receiver.

By the time Moore clears the underneath coverage of Harrison and Worilds, Polamalu has sized up the play, and baits McCoy into a throw. 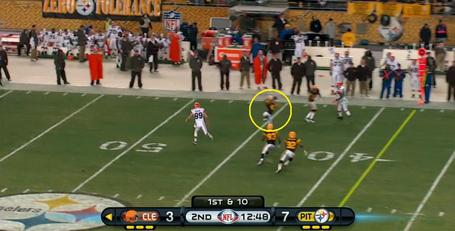 McCoy rips off a pass when Moore is about 10 yards down the field, but gives Polamalu (yellow) plenty of time to make the interception, and pick up some blockers for a return.

3. Harrison Robbed of a Sack

Cleveland is at Pittsburgh's 6-yard line, 2nd-and-goal, down 7-3 with 3:44 left in the game. Polamalu cranked his game up a notch in this critical series, and had made the last two tackles.

McCoy recognizes man coverage, and changes the play at the line of scrimmage. What he failed to account for, however, was Polamalu's instinct. He sees the play change into an obvious pass, and rushes the passer at the snap. The play also called for Smith, the tight end on the left side to release for a pass. That left Thomas and LG Jason Pinkston in to block Harrison and a blitzing Timmons. 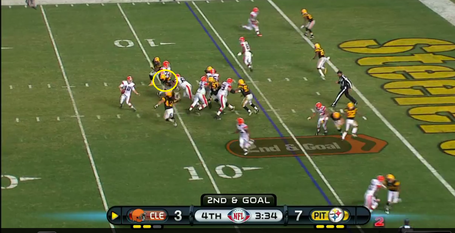 Simply put, whatever McCoy checked into was probably a poor decision. Polamalu is unblocked and is on top of McCoy before he finishes his drop. Thomas doesn't do much to stop Harrison (yellow), and hands him off to Pinkston, who was never in a position to stop Harrison. Thomas shuffles over to block Timmons, but he's already behind him.

McCoy makes a nice move to his right to avoid Polamalu, but Harrison and Timmons are already in hot pursuit, and the Steelers coverage is excellent.

Harrison chops McCoy's leg from behind, forcing him to the ground. He's outside the pocket, and as his right knee is clearly on the ground, he flips the ball toward the sideline.

Referee Ed Hochuli says something about the passer being behind the line of scrimmage, therefore, there's no intentional grounding. It's unclear what he's talking about, but after conferring with his colleagues, they decide to throw a flag. It technically was intentional grounding; the ball does not land at or over the line of scrimmage, and no Browns player has a realistic chance of catching it.

It's irrelevant, though, because McCoy's knee is clearly down (and it's confusing as to what the official, who's standing four feet from McCoy, is looking at). It should have been ruled a sack, but it was a great defensive play. 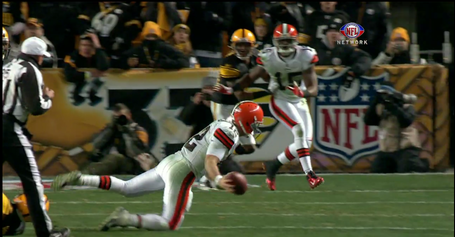 Cleveland has the ball at Pittsburgh's 40-yard line with 2:22 left in the 1st half. Pittsburgh is hanging onto a 7-3 lead despite two red zone turnovers. 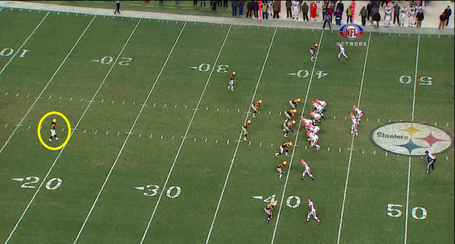 The Steelers are expecting a deep pass, and dropped Polamalu (yellow) 22 yards from the line of scrimmage. The rest of the defensive backs are in man coverage against Cleveland's twins left, 3-WR formation.

Cleveland lacks vertical playmakers, and the Steelers are daring them to try to get the ball deep down the field. The play call is a good one for Cleveland, too. They run WR Jordan Norwood on an out-and-up, looking to get Gay to bite on the out route. With Polamalu playing so far back, Cleveland will have single coverage on its receivers for about 15 yards if they can get a pass off. From the Steelers perspective, they're hoping a stunt from Keisel and Harrison will generate pressure while McCoy is tempted to get the ball deep down the field.

If not for Heyward blowing up Lauvao on a straight-ahead rush, the Browns could have made a big play. 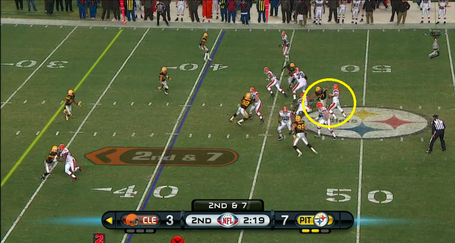 Heyward (yellow) bowls over Lauvao, and just as McCoy completes his drop and sees a streaking Norwood a step or two ahead of Gay, Heyward reaches out to grab him (incidentally, right after Lauvao grabs Heyward).

That forces McCoy to step up, and hesitate in throwing down field. By the time he loads up again, Gay has recovered, and leaves a very narrow window in which to complete the pass. 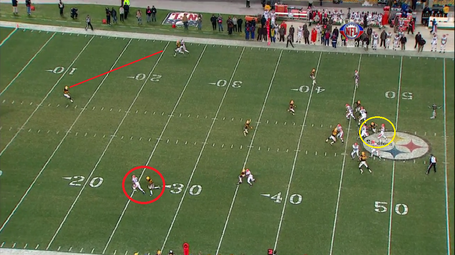 The 11x11 camera shows it clearly. Polamalu is cheating over Keenan Lewis (red line), who's man up on Mohamed Massaquoi on the offensive right side. If McCoy was able to get a pass off right at this point, there's no way even a player as fast as Polamalu could have made it that far to give Gay help. Norwood has Gay beat (red circle), but Heyward prevents the deep pass.

McCoy isn't exactly known for his arm strength. He throws sort of a jump-pass high in the air for Norwood, who still has a chance to make a play despite Gay's recovery. The pass is on target, but there's too much air under it. Polamalu should have been able to make a play, but he takes a bad angle to the ball (similar to the touchdown Cincinnati's A.J. Green scored on Polamalu and Clark in Week 10). He was the deep safety on the play, and cannot allow any receiver to get behind him. Norwood was ahead of Polamalu in the end zone because Polamalu failed to find the ball in relation to the receiver.

The extra time McCoy allowed Gay to converge on the ball leads to him leaping and making a play on the ball. While the end result was an incomplete deep pass, Gay was burned on the route, and he dropped what should have been an interception. Polamalu took a bad angle to the ball. The rookie bailed out the veterans.

The Browns are faced with a 2nd-and-2 situation, but with only 5 seconds left in the half. McCoy has three receivers to his right, and looks for the Hail Mary.

The Steelers are rushing four, and Heyward is the only down lineman. Typically, Hood plays this role, but he left the game with a groin injury. Harrison, Keisel and Worilds join Heyward, all from standing positions.

At the snap, Harrison immediately gets leverage on LT Joe Thomas, and Worilds gets leverage on RT Tony Pashos. Thomas drags Harrison down, drawing an obvious penalty, and McCoy escapes from Worilds by scrambling to his right. Keisel and Heyward were both containing the pocket more than rushing the passer. Timmons also waits for a possible run by McCoy. 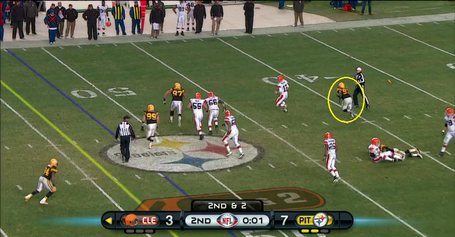 Pashos sees McCoy escape to his right, and doesn't stay with Worilds (yellow). Heyward steps up, freezing McCoy in place as Worilds builds a head of steam. McCoy scans his deep receivers quickly, but doesn't like his options. He doesn't feel the pressure Worilds is building on the back side, and his only option appears to be a checkdown pass to RB Chris Ogbonnaya (25). 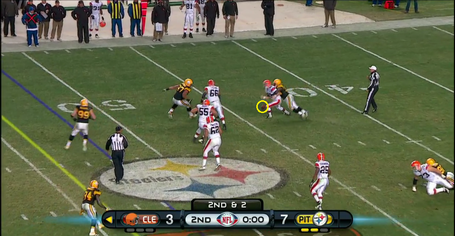 The force of Worilds hit jars the ball loose (yellow), and was recovered by Mack. The clock expired anyway, and the Steelers held off the Browns' scoring threat.