Steelers vs. Bengals, Round 2: Five Players to Watch in Pittsburgh's Game Against Cincinnati

Share All sharing options for: Steelers vs. Bengals, Round 2: Five Players to Watch in Pittsburgh's Game Against Cincinnati

It's time to stop thinking about that ugly win against Kansas City last Sunday. Sitting Pretty at 8-3, the Steelers look forward to welcoming the Cincinnati Bengals to Heinz Field, eagerly awaiting the challenge of a surprisingly competitive team. Led by youngsters Andy Dalton and A.J. Green, Cincinnati is only a game behind Pittsburgh and currently occupies the coveted 6th seed in the AFC playoff standings.

The game of course will be a rematch of the teams' week 10 meeting, when Pittsburgh held off the young Bengals and came away with a 24-17 victory. The much-maligned Willie Gay featured majorly on that day, as he was directly responsible for two crucial turnovers that sealed the game. Despite the loss, many on this site were impressed by the effort and competitiveness of these Bengals, picked by many experts to be one of the worst teams in the NFL before the season.

Of course, both teams have looked pretty vulnerable when we last saw them. While the Steelers laid a stinker against the Chiefs and barely snuck out a win (some may say it was really a loss), Cincinnati looked similarly lackluster in a come-from-behind victory against Cleveland. Both teams cannot be satisfied with their performances in week 12, which should make for a great game between two well-prepared opponents this Sunday.

Talking about the Bengals has become synonymous with talking about Green and Dalton, but their defense should not be overlooked. Defensive Coordinator Mike Zimmer is leading a unit that ranks 5th in overall defense this season. Especially the young and vicious front seven gave Pittsburgh plenty of problems when the teams first met, most notably harassing Ben Roethlisberger and - inadvertently - breaking his thumb. Sunday's game will provide plenty of challenges if the Steelers want to stay among the leaders of the AFC, and these Five Players to Watch are especially important in sweeping the season series against the Bengals. 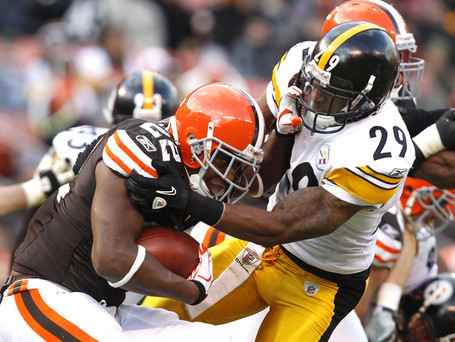 No, Al Michaels, Ryan Mundy's name is not pronounced 'Monday'. Maybe you should get that into your head, because you might be saying his name plenty more in future Sunday Night Football games. The local free safety (Mundy played high school football at prestigious Woodland Hills) had a slow start into his professional career, but turned heads when he played in place of the injured Troy Polamalu in last year's AFC Championship Game against the New York Jets. Beyond being a solid component of the Pittsburgh special teams unit, Mundy has been the primary safety backup at both spots ever since.
He once again showed his promise against the Chiefs, when Polamalu went out early with yet another head injury and Mundy stepped into his shoes. Not only did he record his first career interception, he also led the Steelers in tackles with 11 (8 solo). A nice contingency plan for Pittsburgh, which has long lacked a quality replacement for those dreaded times Polamalu inevitably sustains another injury. Who could forget the Tyrone Carter experiment in 2009? But I digress. My projection is that the Steelers will be cautious with Polamalu after the umpteenth concussion (or concussion-related symptoms), meaning that Mundy will get plenty of time to improve on his impressive outing against Kansas City. But even if Polamalu plays, he has often been employed along the line of scrimmage this season, with Mundy playing deep coverage alongside Ryan Clark. Either way, his physical nature (6 foot 1, 209 pounds) will allow the Steelers to match him up with Jermaine Gresham, the Bengals tight end who seems to be on the verge of becoming a star in this league. How Mundy performs when given a chance will play a big role in whether the Steelers knock out the Bengals once more. 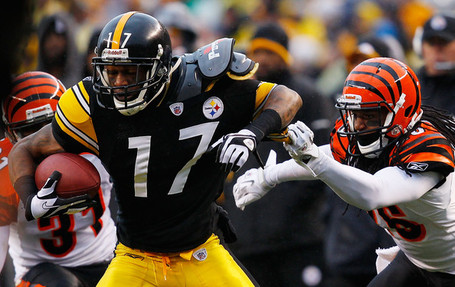 Remember when Michael Bean was posting regularly about Mike Wallace's pursuit of 2,000 receiving yards? It seems like a long time ago, now that the 3rd year receiver is coming off a disappointing stretch as he averaged just 35.5 yards (less than 9 yards per catch) during the past two games. Sure, much of that is directly connected to the emergence of Antonio Brown, who has quickly become one of the most dangerous third down receivers in the league. But nerves have also played a role, as Wallace got into a scuffle with Kansas City players before last Sunday's game and dropped two potential touchdowns (one a 50+ yarder) later that afternoon.

In short, the last two weeks have supported Coach Tomlin's hypothesis that Wallace is still just a one-trick pony and that taking the long bomb away will more often than not take him out of the game. But let's not exaggerate the demise of one of the most promising receivers in the game quite yet. Quite likely, Wallace is experiencing that inevitable mid-season slump that was projected by so many fans on this site when he made his 2,000 yard prediction during training camp, and one good game could put him right back into the groove. And why shouldn't that game happen against Cincinnati? Zimmer's imposing defense relies on its front seven and a strong pass rush, but has been average against the pass - ranking 11th in total passing yards allowed per games and 28th in interceptions this season with 6. Their best cornerback Leon Hall is out for the season after injuring his Achilles Tendon in the first game against the Steelers, leaving the duties of defending Wallace to free agent acquisitions Nate Clemens and Kelly Jennings. If Roethlisberger is allowed enough time in the pocket and Wallace comes out sufficiently angry about his recent lack of production, the Bengals secondary could be in for a long day . 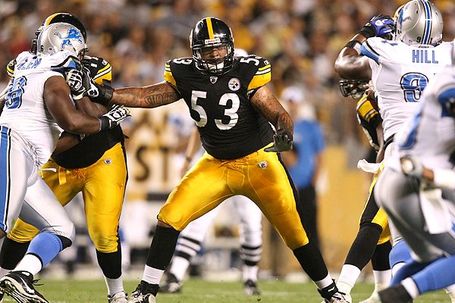 When Steelers fans are complaining about terrible performances from the offensive line, they usually don't include Maurice Pouncey in their complaints. The young center was drafted last year with the coaches intending to try him out at guard, but outplayed his counterpart Justin Hartwig to the point where the veteran was cut after training camp, and the rookie started every game of the season until the Super Bowl. Beyond improving the shaky offensive line, Pouncey was named an all-pro after the season, a rare feat for a rookie interior lineman.

But his second season has proved to be a little more challenging. I have been vocal in these posts about a drop in performance from the second year player, who has missed some assignments and made some mental errors that I didn't see last year. Some critics go further, clamoring that he shouldn't have made the pro bowl in his first season either. We as Steelers fans know the stability that Pouncey has brought to this line, and his recent lack of performance may well be explained with constantly changing linemen that make consistency impossible. He also missed the majority of the game against the Chiefs with a stomach virus that reportedly caused him to lose 12 pounds in one week. Despite these challenges, Pouncey needs to come up big against the Bengals after a constant defensive line rotation wreaked havoc in the Pittsburgh backfield the last time. Pass rushing defensive end Carlos Dunlap will likely miss yet another week with a nagging hamstring injury, but the inside line looks to be at full strength. A dominant game from Pouncey in both the run and the pass game would be a welcome sight for Steelers fans and Roethlisberger's still-sore thumb. 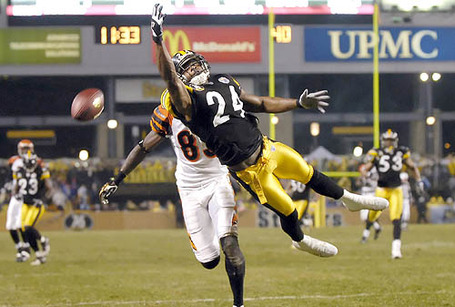 via steelerstoday.com
I present to you the main reason why the game against Kansas City shouldn't be taken too seriously: Ike 'Stonehands' Taylor caught an interception! Granted, it was a beautiful pass courtesy of Tyler Palko directly to him, but we have seen our best cornerback drop plenty of those in recent memory. The interception (and a second one he was robbed of by Lawrence Timmons) underscores that despite slightly regressing to the mean in the past few games, the veteran Taylor is still having one of the best seasons in his career.
He is fast, he is physical, he is tall, and he is just a rookie: A.J. Green has terrorized defenses this season with mind-boggling and game changing catches. Does anybody else think that the jump ball he snagged out of the air only to take off running immediately was much more impressive than he is given credit for? The athleticism and short-area quickness he showed for a guy of his size was ridiculous. Green is only a rookie but I already hate that the Steelers have to face him twice a season, which is about the highest praise you could get from the staunch Steelers fan that is me. I am willing to bet that Taylor will be given the responsibility of ensuring that Green will not take over the game, and he just might be able to do this with his impressive size and athleticism. The Bengals employ other emerging receiving threats such as Gresham and newly-crowned flop king Jerome Simpson, which will make a constant double coverage on Green impossible. All the more responsibility for Taylor, who is still among the league leaders in terms of least touchdowns allowed. Do it one more time Ike! We sure would appreciate it. 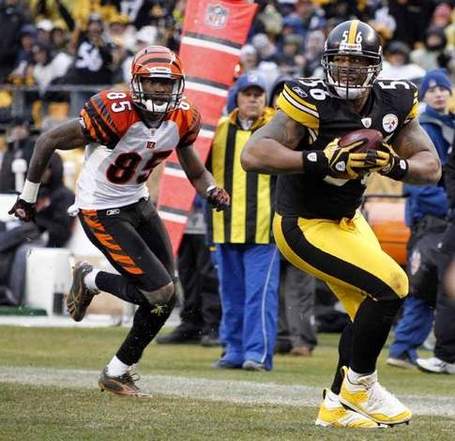 via 1.bp.blogspot.com
We have heard it so often that it has become a cliche: linebackers and especially pass rushers have to possess an angry disposition to succeed in the NFL. Here in Pittsburgh, we have been able to witness a galore of such pass rushing experts, with the latest editions of James Harrison and LaMarr Woodley routinely putting fear into opposing offenses. We saw evidence of this disposition just a month ago, as Harrison returned from an eye injury that sidelined him for a considerable amount of time only to record one of the best games in his career with three sacks and one forced fumble.
This week, it will be Woodley's turn to get back on the field and show his anger. The former Michigan Wolverine was forced to miss the last month with a hamstring injury, right after coming off one of the most dominating stretches in his career as he recorded 7.5 sacks and one interception during his last four games. He showed that he could produce without Harrison on the other side, who had often been argued to be the major reason for Woodley's success because of the focus offenses have to give him. But now both are back, looking to disrupt an offense that has only let opponents sack Dalton 17 times this season. While Harrison will lock up with one of the NFL's premier left tackles in Andrew Whitworth, Woodley will face off against right tackle Andre Smith. The former 6th overall pick had been written off as a bust before this season, but has come on nicely and rendered Woodley's replacement Jason Worilds almost completely ineffective in the teams' first meeting. Woodley will be a different caliber though, and seeing Dalton placed on his backside a few times before he can find his young receivers will be huge toward leaving Heinz Field with a win.

Football is played by more than five players, you say? Of course it is! While these players will be crucial in sweeping the season series with Cincinnati, others will need to make an impact as well. Rashard Mendenhall might be able to build on his solid outing against Kansas City. If he doesn't, Roethlisberger's ability to throw despite a broken thumb will become even more important once again. The Bengals will look to establish the run, so the inside linebackers and defensive line need to play their best to hold the line of scrimmage. Who are your Five Players to Watch in the rematch against the Bengals?