Cameron Heyward shattered Play of the Game records with two appearances on this week's list, despite only playing 13 snaps. He and Steve McLendon combined for enough eye-popping plays to make Steelers fans very excited about the future of the defensive line.

The future may even be now. One of the best plays of Pittsburgh's 20-3 loss at San Francisco had a dominant defensive effort from the defensive line - and it did not include the names Hampton or Keisel.

San Francisco is driving early in the game, effectively using a balanced-but-short offensive attack. It's 1st and 10 from Pittsburgh's 13-yard line with 5:37 remaining in the first quarter.

The 49ers have a double-TE set with Delanie Walker motioning from right to left, bringing the formation to an offset-I. TE Vernon Davis is flanking RT Anthony Davis.

WR Ted Ginn is split wide to the left, on the line. WR Kyle Williams is in the slot. RB Kendall Hunter is behind QB Alex Smith.

The Steelers counter with their base defense, but with an element of pass rush. LDE Ziggy Hood and NT Casey Hampton are down on the line, and RDE Cameron Heyward is over the left guard. Jason Worilds is standing up to Heyward's right, and LaMarr Woodley flanks the line on the left side. James Farrior and Lawrence Timmons are four yards off the ball with a yard split between them. The secondary is in man coverage.

At the snap, Timmons charges on a blitz, along with Woodley and Worilds. LG Mike Iupati picks up the blitzing Timmons, but Staley stays with Worilds, leaving no one but the rookie Hunter on Heyward. 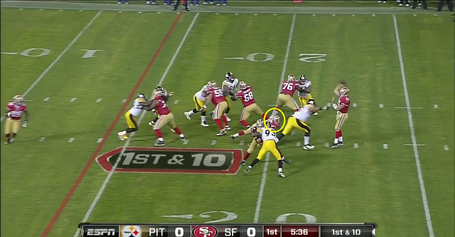 Smith gives a fake hand-off to hunter, and is looking for a quick pass to Davis who's dragging underneath the coverage. Hunter sells the handoff, but Heyward doesn't buy it, and forces Smith into a rushed throw that Davis couldn't catch. Hunter (yellow) flails vainly at Heyward, and ends up on the ground.

With 4:19 left in the first quarter, the 49ers have the ball at Pittsburgh's 2-yard line. There is no score in the game.

San Francisco has three tight ends in the formation, clearly showing run. Justin Peele joins Walker and Davis off the right side, and Ginn is flanked wide to the left. Gore stands behind Smith.

The Steelers have their goal line unit in, which is every defensive lineman they have, and three defensive backs. From left to right, Timmons is standing up, Woodley, Hood, Hampton and McLendon are down, and Keisel and Worilds are standing up. Larry Foote and James Farrior are over the center, four yards deep. Polamalu is in man coverage on Ginn. Clark is shadowing the tight ends on the offensive right side of the formation.

At the snap, the 49ers offensive line blocks in zone to their left. Hampton (yellow line) and McLendon both recognize this immediately, and push C Jonathan Goodwin and G Adam Snyder into the backfield, thus sealing off the lane that was supposed to be created for Gore. The red line is an approximation of the line of scrimmage, and both McLendon and Hampton are well behind it, leaving a huge seam for Clark (yellow circle) to come up and clean the play up.

Excellent technique by the defensive line and great recognition by Clark against one of the best running teams in the league.

3. Defense Is So Good, They Only Need 10 Players

The 49ers are facing a 2nd-and-7 while owning a 3-0 lead with 13:49 left in the second quarter. They are at Pittsburgh's 30-yard line, threatening to add to their lead.

The Steelers are showing a Cover-1 man defense - a very aggressive look aimed to put pressure on the passer. Polamalu is playing a deep center field, about 15 yards off the ball. Both outside linebackers - Woodley and Worilds, are pinched in at the line, and Farrior and Timmons move presnap to show a fire-X blitz (they criss-cross each other in a blitz). 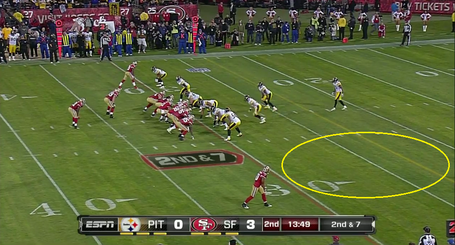 Clark is representing zone coverage to go along with man coverage from the corners on the outside. The problem is, there is only one corner on the field. Ike Taylor is covering Ginn split out wide on the offensive left side, but no one is covering Williams (yellow circle) on the offensive right side. Clark is standing at the 21-yard line, and Polamalu is about nine yards behind him.

Fortunately for the Steelers, Williams somehow fails to recognize this, and Smith never looks over at him to see there is no one within 20 yards of his receiver.

This also strongly suggests the 49ers are clearly looking for Davis on this play. At the snap, the true intentions of the Steelers defense comes out. Woodley and Worilds don't rush, and fall into hook-to-curl zones. Davis runs deeper than Woodley, and Clark is pursuing Davis to cut off the top of his route.

Judging by Clark's angle of pursuit on Davis, it's more likely the corner on the vacated defensive left side would have been in zone, because Clark drops back at the snap, and takes a deeper angle of coverage - suggesting his responsibility is over the top of Davis. Steelers defensive coordinator Dick Lebeau is gambling that Smith will be looking for Davis, and showing man coverage on Ginn on one side of the field, while going zone on the other gives the Steelers a good chance for an interception. Smith would have seen man coverage, and likely lost where Clark was. Since the corner would have been in a front zone on Davis, Smith would think Davis has a step on his defender. Clark would then be there to make a play on the ball.

Again, though, there's no corner there. Williams (not in picture) breaks his route off to a deep post after realizing no one is covering him. Davis (red circle) runs an out that would put him at the sideline right by the first down marker.

Fortunately again for the Steelers, the 49ers protection collapses. The left guard through the right tackle all slide down to help block the overload blitz from Farrior and Timmons. The Steelers are baiting Smith to make a throw to Davis on the right sideline, because Smith should not be able to see Clark coming over. 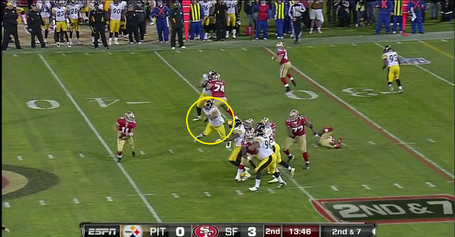 Instead, Smith is distracted by a nimble Casey Hampton (yellow circle), who lept over Gore trying to cut his legs. Timmons also busts through, forcing Smith to his right.

He doesn't have a throw, and if he did recognize Williams down the field, he had no chance to set and deliver the ball due to the pressure caused up front.

It could have been a huge gaffe on the Steelers defense, but ended up being a win.

Pittsburgh shows zone coverage in Smith's presnap read. At the snap, Timmons blitzes from the middle, and Davis wisely runs his route to the zone in which Timmons would be occupying. It's a simple read for Smith, and he throws a strike to Davis. 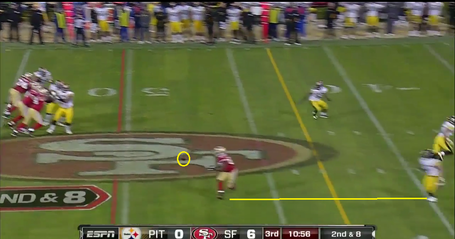 It immediately looks like there aren't any Steelers defenders around, and Davis would have more than enough time and space in which to make the catch (ball in yellow) and run for a first down. Polamalu is charging hard from at least 15 yards away (he began his pursuit off camera), and is seven yards away from Davis before he makes the catch.

Polamalu makes up those seven yards in less than a second, while Davis makes the catch and turns around, only to have the defending Defensive Player of the Year execute a perfect tackle on a man of Davis's size.

Cortez Allen failed to take Davis down properly earlier in the game, and Davis got a first down out of it. Polamalu not only makes up an obscene distance in a very short amount of time, but he takes Davis down in the open field despite being half his size. The pass ended up netting San Francisco five yards.

San Francisco is hanging onto a 20-3 lead with 2:28 left in the game. They're facing a 3rd-and-3 from their own 9-yard line. Failure to convert this third down will mean they're punting from their own end zone, giving a team with great playmakers on the outside the ball back, down two touchdowns. A quick touchdown from a short field followed by a successful onside kick, and the Steelers would have a chance to tie it.

The Steelers change up their goal line defense a little bit, and come out with a package of three down linemen - left to right, Hood, McLendon and Heyward, McLendon is head up over the center. Lawrence Timmons is standing up next to Heyward and FS Ryan Mundy is to Timmons' right. Worilds is two steps to Hood's left. 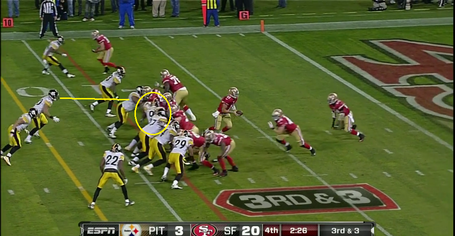 At the snap, The 49ers were looking to drive the Steelers backward and have RB Anthony Dixon make a cut where he saw the most room. He initially aims for the left side, but Timmons blew past Davis, and Heyward wasn't moved an inch by T Alex Boone (former college teammate of Heyward's).To Heyward's left, McLendon puts a swim move on Goodwin to his left side, bringing him right into LG Iupati.

Iupati was aiming for the second level, where Foote and Farrior were standing in front of the first down line. McClendon tied him up, leaving Foote free to identify the play.

Dixon's initial read to the left side closed off quickly because of Timmons and Heyward. He cuts back to the left, but McLendon lay on the ground, blocking any lane. Hood stood his ground against Snyder, not moving backward, just like Heyward. 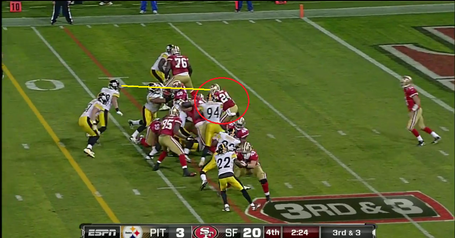 Dixon has nowhere to go, makes the mistake of turning his shoulders parallel to the line of scrimmage (red circle) and he plays hide-and-seek with Foote from behind Snyder and Hood. Foote closes the gap, and eventually goes after him, along with Farrior.

Dixon is stuffed for a yard, and well short of the first down. The Steelers younger defensive linemen - Hood, McLendon and Heyward - have shown the same short-yardage toughness their predecessors - Smith, Hampton and Keisel - have for the better part of the last decade.

There was a time when analysts questioned the age of the Steelers' defense. The amount of plays made by the younger Steelers - whether they're injury replacements or they've flat-out earned their time on the field - shows again how the Steelers don't rebuild, they reload.