Share All sharing options for: Steelers Week 16 Defensive Plays of the Game Highlight Polamalu and Harrison

In a defensive highlight reel almost exclusively owned by Troy Polamalu and James Harrison, a few exceptional plays by the Steelers defense stood even taller than those two. They directly influenced several winning plays for the Steelers in their 27-0 win over St. Louis.

After CB Keenan Lewis breaks up a short pass, the Rams bring their punt team on the field, kicking to Pittsburgh from the Steelers' 44-yard line with 13:30 left in the second quarter.

With Antonio Brown deep, the Steelers are showing their basic punt return package. Rams LB David Nixon releases from the edge, covered by Steelers CB (and special teams ace) Will Allen. S James Butler is behind the line of scrimmage, and is marked by CB Bryant McFadden.

When P Donnie Jones received the ball, it was obvious he was looking to pass. Allen, who's watching his guy (Nixon), isn't going to be looking for the ball, but rather, watch his guy's reaction and listen for the sound of the kick. He doesn't hear it, and wisely stays with Nixon, thus eliminating the play's primary option; a Jones' pass to Nixon down the seam of the field. McFadden locks immediately onto Butler, who released out of the backfield and immediately looked back at the punter, which tipped McFadden off to the deception. 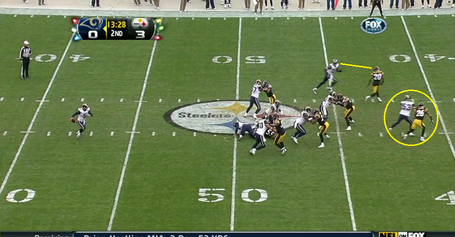 With Allen (yellow circle) and McFadden (yellow line) locking down the pass options on the fake punt, Jones's only option is to run. He has an opening to his right, and he has surprisingly decent mobility.

Punters are often underrated athletes. Many were former position players, but excelled in the punting game. Jones shows his speed, and nearly converts a long first down run.

But Brown, who saw the fake immediately and came up to support his defense, and shows, perhaps, that receivers aren't bad defensive backs, either. Jones is stopped a yard shy of the first down, and had Brown not made that tackle, Jones could have gone for several more yards. 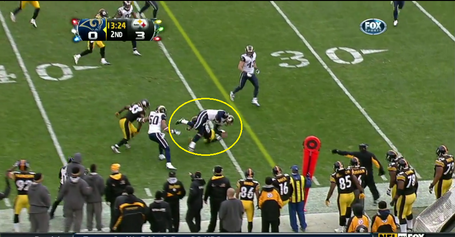 The Rams are lined up in a twins right formation with TE Billy Bajema off the line but next to LT Adam Goldberg.

The Steelers are lined up with Hood, Hampton and Keisel, left to right, on the line. LB James Farrior is four yards off the ball over center, and is showing blitz. Jason Worilds (offensive right) and James Harrison (offensive left) are standing up, pinched in over the tackles and are both showing pass rush. 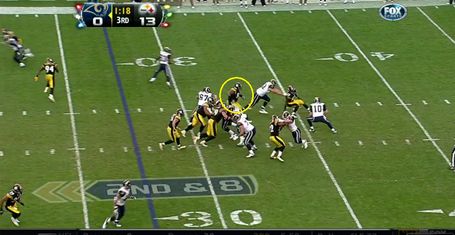 At the snap, Harrison and Worilds both take hard outside angles toward Clemens. Worilds blows past Harvey Dahl, and Harrison bullrushes Goldberg well into the backfield. Rams G Bryan Mattison looked to double-team Hampton, who pushed straight ahead, but with Dahl on Worilds, no one blocked DE Ziggy Hood (yellow).

The key to the play, though, is Worilds' penetration. Clemens is just coming out of his drop when Worilds lands two yards from him. Clemens attention is taken off of hot receiver Brandon Lloyd (top of picture) and goes into stepping up in the pocket. 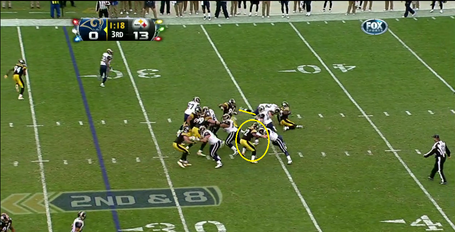 With Hood square in front of him (yellow line) and Harrison shedding Goldberg to pursue him from his left, Clemens has nowhere else to go but down.

Hood lands on him for the sack with Harrison right behind him.

St. Louis had given the Steelers a stead dose of Steven Jackson on this drive, and with only a 13-0 lead, it was a critical point in the game.

The Rams line up in a 2-TE set with Danario Alexander in tight on the right side. It's a clear power-running formation, and one in which the Rams had a good amount of success on this drive.

The Steelers counter by moving Polamalu over the inside tight end, about three yards off the ball. 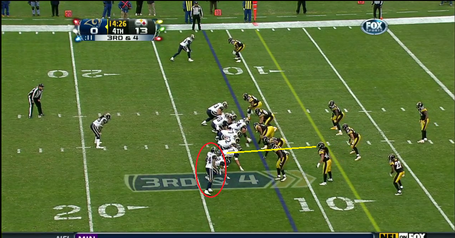 Alexander (red circle) motions two steps to his left, looking to identify who's covering him. He sees Polamalu move a little bit, so he stands right off the outside tight end, assuming Polamalu will be the guy he blocks.

Instead, Polamalu uses the same thought process against Alexander. This situation came up earlier in the game as well (it will be highlighted next). Polamalu is basically recognizing a run because Alexander is locking eyes on him.

Jason Worilds, the left outside linebacker, recognizes Alexander's motion as well, and takes a step to his outside, leaving a space for Polamalu to rush. 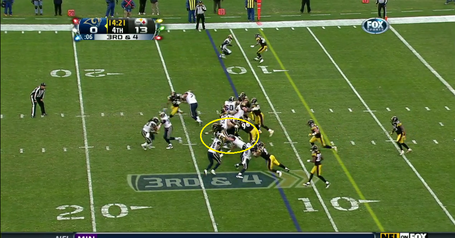 Polamalu (yellow circle) jumps in the space Worilds cleared for him, and surprises Bajema, who grabs into his arm in an attempt to slow him down (no flag on this). Alexander barely moved and failed to do anything to prevent it.

Polamalu knifes in on Jackson, stopping the longest Rams drive of the game, and forcing the field goal.

It's the first offensive play of the game. St. Louis has the ball at their 20-yard line after an opening touchback on the kickoff.

St. Louis opens in a 2-TE set, lining both of them off the right tackle. WR Danario Alexander is in motion from left to right, Clemens is under center with Steven Jackson behind him.

Polamalu mirrors Alexander in his motion, suggesting Polamalu is in man coverage. Offenses use motion to force defenses to show what kind of coverage they'll be in.

Polamalu will use this against the offense, because Alexander is leading him right where he wants him to go. 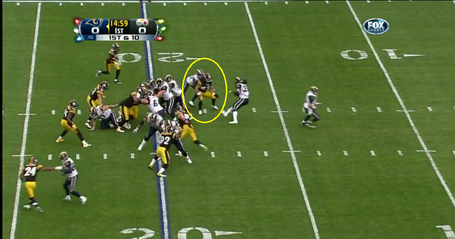 Alexander gets around the right tackle, and as the ball is snapped, Polamalu (yellow) blitzes between Alexander and the right tackle. Neither of them expected it. Steven Jackson barely has the handoff in control when Polamalu is on him. The play is stopped for a 2-yard loss.

The Rams have the ball in a 3rd-and-7 situation with 5:36 remaining in the second quarter.

St. Louis has four receivers, three of them are bunched on the left side in an obvious passing down. RB Steven Jackson is next to Clemens in shotgun.

Clemens checks off the original play call, and the ball is snapped. It looks like the Rams receiver simply fail to get off the line with any quickness. Harrison and Jason Worilds time the snap count perfectly, and both converge from the outside to destroy the pocket before Clemens is even set to make a throw. 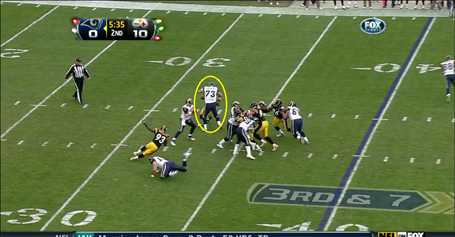 Harrison (yellow circle) locks into LT Adam Goldberg, and is pushing him back into Clemens, while Worilds slipped a little off his block from Harvey Dahl. Clemens sees his only option is TE Lance Kendricks (88), but Harrison's push forward, as well as a great rush from DE Brett Keisel cuts his vision off. 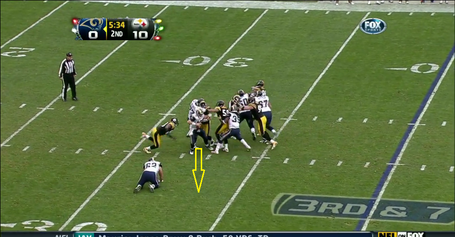 St. Louis's protection has completely broken down. Larry Foote, who delay-blitzed off the defensive left side, is too much for Jackson to handle in one-on-one blocking. Worilds recovers his feet, and is moving in on Clemens. At this point, Harrison has full control over Goldberg, despite Goldberg being twice Harrison's size. Clemens has nowhere to go but to his right, but has little options in that direction.

Harrison launches Goldberg into Clemens' back, but it isn't enough to knock him down. 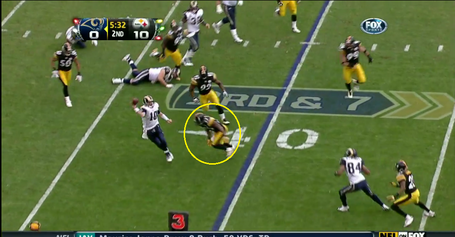 Clemens is able to escape certain doom in the pocket, but FS Ryan Clark (yellow circle) charges hard to prevent Clemens from running for any yardage. Clemens flips the ball at Brandon Lloyd, who's blanketed by Keenan Lewis. The pass falls incomplete, and the Steelers' all-around best defensive play of the game leads to another St. Louis punt.