As Mary Kay Cabot of the Cleveland Plain Dealer reported, Browns QB Colt McCoy was not cleared to practice Wednesday, which is likely an indicator Seneca Wallace will get his third straight start, this time in Week 17 vs. Pittsburgh.

As Steelers FS Ryan Clark said this week, Wallace is comparable, even better, than McCoy, but the Browns are a team in which little difference exists from one quarterback to another.

McCoy is mobile and has the toughness to stand up to an incoming hit and complete a pass. The hit from James Harrison that sent him to the bench after Week 14 is a testament to that.

Wallace looked, at times, noticeably better than McCoy in terms of vision and efficiency. There are other times he seems to have a general lack of focus, most notably, the decision to call a running play instead of spiking the ball at Baltimore's 5-yard line at the end of the first half. The clock drained down to zero without even a field goal attempt.

Cleveland lost 20-14, and a slew of other failed opportunities plagued them as much as Wallace's poor decision, but the difference between winning and losing can oftentimes be found in those kinds of things.

It's in decision-making, and that's likely the part of Wallace's game Browns head coach Pat Shurmur and his staff will work on with him this week. 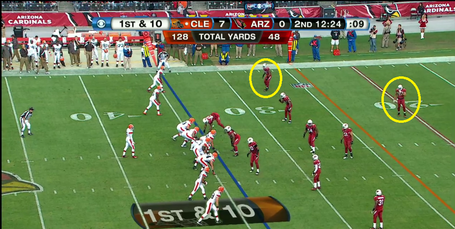 Wallace is lined up in shotgun with twins on each side of him. Cleveland had moved the ball well to this point in the game, mostly around Wallace's one-look-and-release passing. He completed 7-of-10 passes for 67 yards, and only one of his misses were not decently thrown balls.

Cleveland was looking for a big play, and had a good play call set up. Attacking rookie CB Patrick Peterson and S Adrian Wilson (yellow circles), WRs Mohammad Massaquoi (outside) and Greg Little (inside) are on the left. 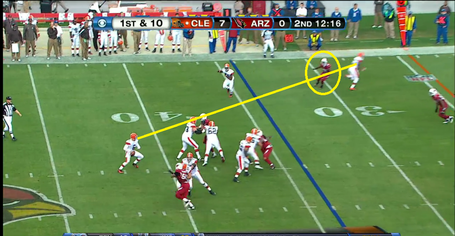 Massaquoi runs two steps, and cuts back sharply back to Wallace. Wallace pumps a pass to Massaquoi, who's hands are up, selling the idea of a short pass. This freezes Peterson (yellow circle), who's in zone.

Meanwhile, Little runs a wheel route right over Peterson, and is in a perfect position to catch a pass at the first down marker, if Wallace delivers a hard throw. It would likely have gotten to Little before Wilson, who was shading toward the middle of the field and out of the camera shot, could have made it. And that's assuming Wallace just went for the first down. He had time in the pocket, he had a chance to hit Little in the end zone, where Little would have had single coverage from Wilson. 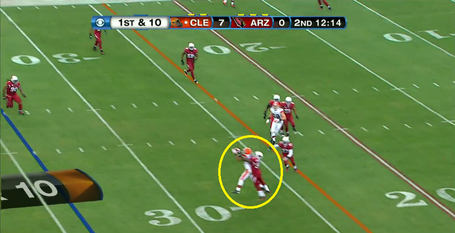 Wallace checks off the designed read of the play, and looks back to his right. He throws incomplete to WR Jordan Norwood, who's blanketed (yellow circle) by CB Richard Marshall.

It's not so much that it was a bad decision, it's that Wallace had a chance to make a play and he elected not to try. He could have gone to the end zone to challenge a safety who's somewhat out of position (which is what the play was designed to do) or he could have thrown a hard spiral at a spot where Little was wide open, and at least gotten the first down. This team averages 13 points a game, and its mentality really should be more aggressive. At that point, Cleveland's defense was playing well, and they had a lead.

After that play, Wallace threw two more incompletions, and the Browns settled for a field goal. After his 7-for-10 start, he finished 11-for-21 for 159 yards, but he did throw a touchdown pass.

In his last start of the 2011 season, and against a better secondary than he saw in Arizona, Wallace won't have as many opportunities to make big plays. If Cleveland will have any chance, though, Wallace needs to step up and take a few chances.

Baltimore identified Wallace's hesitance and played very physical with their receivers at the line. They gambled with a lot of single coverage, and it paid off. They held Wallace to just 4.2 yards per pass - a rare situation in which a team rushes for a better average (4.5 yards per carry) than passing.

Look for Pittsburgh to do much of the same. Wallace can make plays with his feet, but if he can do it with his arm, he doesn't seem to think he can. The Steelers will bring lots of pressure, and will need to be convinced Wallace and the non-playmakers the Browns have at their receiver positions can beat them down the field.