The Steelers, Turnovers, and the New, Kinder, Gentler NFL

Share All sharing options for: The Steelers, Turnovers, and the New, Kinder, Gentler NFL

I wonder how much of our lack of turnovers is due to the changes in how Steelers players are hitting due to the current state of rule "enforcement"? [Does] less leading with the head mean fewer balls knocked loose and fewer frightened receivers/quarterbacks?

This comment was in response to Part 3 of my series about defensive turnovers. It seemed like a good thing to wonder. After all, Ryan Clark's hit a couple of weeks ago, which resulted in a personal foul penalty and a $40,000 fine, was used by Mike Tomlin to demonstrate the classic technique for dislodging a ball. If you are afraid to tackle in a way that is more likely to dislodge the ball, because it is also more likely to result in a penalty and/or a fine, then that would surely lead to fewer forced fumbles overall.

And naturally a reduction in fumbles also reduces the number that you have a chance at recovering. If you momentarily hesitate when you tackle the quarterback, so as to make sure that you don't tackle him in a way that attracts the attention of the refs or the league, that gives said quarterback just that extra split second to get the ball away or escape your intended ministrations. But do the numbers really bear this out?

I went looking for the data. What I found was a mare's nest. I gathered the information for sacks, interceptions, and forced fumbles (whether or not the forcing defense recovered them) for the games thus far this season for every team. I wanted to compare them to last year's figures, but I could only find totals for the full season in previous years. Since I only had 10 games to work with last week when I started on this post, I extrapolated the numbers by dividing by 10 and multiplying by 16 to get what I hoped was a reasonably accurate number. And what I found was striking—pretty much across the league the numbers of forced fumbles appear to be well below last season.

But I thought that perhaps I should check whether it was reasonable to assume that fumbles are forced in a fairly linear way. I picked 10 teams to get the actual numbers from the box scores for last season through ten games. And, at least last season, I discovered that in fact fumbles increased quite a bit over the remainder of the season. In other words, calculating the expected numbers after ten games for last season and comparing the actual numbers showed that in fact those teams actually gained only about 73% of the fumbles one would have expected, given the total at the end of the year. And I suppose it makes sense that fumbles will increase somewhat during cold-weather outdoor games.

So to check this I did the same thing for 2009, getting the actual figures for ten teams and comparing them to the season totals for those teams. I discovered that for whatever reason, they were on average lower than expected, but not nearly as much. In fact the figure was about 96% of the expected total—lower, but within normal statistical variation.

At this point I was thoroughly sick of poring over the NFL box scores, especially as I had incidentally discovered something really irritating. That is that the number of fumbles, sacks, and so on that appear in the box scores don't necessarily tally with the "official" NFL stats chart. Clearly some of the numbers are changed upon further review, and the new figure is entered into the stats site, but they don't update the box score as it stands at the end of the game. In some cases the divergence is fairly minor (although it does matter, given how small a data set one is dealing with in the first place,) In other cases it is quite major. Take this year's information for the Steelers, for example. By carefully totting up the box score I came up with a figure after Game 10 of 24 sacks, 4 interceptions, and 4 forced fumbles. The NFL official figures showed the Steelers with 23 sacks, 4 interceptions, and 6 forced fumbles. ESPN's figures had even more variance, giving the Steelers 23 sacks, 4 interceptions, and 8 forced fumbles. The problem is that the NFL does not, as far as I could tell, give you week-by-week figures, so all I could do was take the figures from the box scores, compare them with the season cumulative figures, and try to reconcile them with the box scores when they differed.

Since I had all of these figures, but wasn't entirely sure what they meant, my husband suggested that I graph them and see if anything showed up that wasn't obvious just looking at the numbers. So I started with New Orleans, since that was the first team that showed up on the NFL Week 1 page. First I entered the 2010 regular season totals for sacks, interceptions, and forced fumbles. These show up, naturally, as a straight line, since it is plotting the average figure from 0 at the beginning of Game 1 to whatever the final number is. (I could, of course, do the whole "write down all of the numbers from the box scores thing" and get real numbers for each week, but I do have to eat and sleep, and don't have a research staff.) I then plotted the actual numbers (more or less, depending on which site you believe) for each game this season and had a look. I was very excited, because my theory is so far triumphantly confirmed: 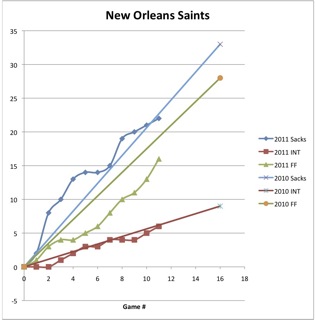 As you can see, sacks and interceptions track the 2010 season's averages pretty consistently, but fumbles after the second week drop to well below last season's plot.

With great excitement I entered the figures for Green Bay. The figures didn't correlate quite as well as they did for the Saints, as you can see, but there is a small but noticeable reduction in fumbles after the first few weeks. 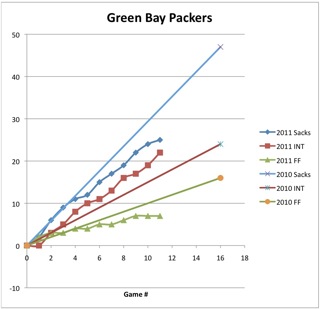 Then came Baltimore. And just as they dashed my hopes on that fateful day in September, their figures were not helpful, especially after Thanksgiving's 9-sack game: 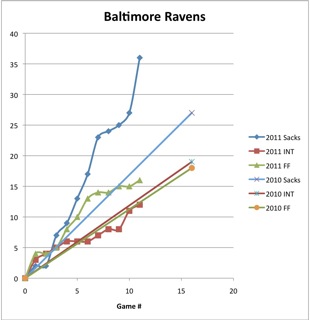 I plotted four more teams—the Bengals, the Browns, Jacksonville, and Indianapolis. In two cases (Bengals and Browns) fumbles were substantially above last year's figures. Jacksonville's are well down, although they have climbed back towards last year's average in the past few weeks, and the Colts were way up, leveled out around Game 5, and are now below last season. All of which probably says that it is more about the team and how well it is playing this year than it is about the new rules, although there may still be some effect. However, I decided that I was unlikely to find out too much more than that by plotting the remaining teams, and therefore it wasn't really worth the time.

But I still had all this lovely data, and decided to just look at the Steelers and compare them to the teams for the past seven years. I split the graphs into sacks, interceptions, and forced fumbles. Here's what the interceptions graph looks like: 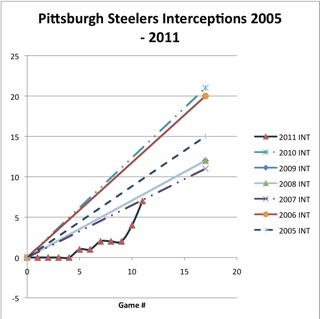 We knew things were bad, but this has been historically bad. If you look at the point for Game 10 you can see just how much worse it looked before last Sunday. But surely the other numbers look better. Here are forced fumbles: 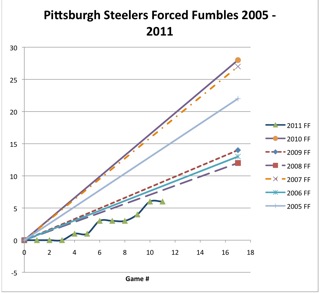 Well, it is still historically low, but not enormously lower than the three low seasons from the previous six years, 2008, 2006, and 2009. How about sacks? 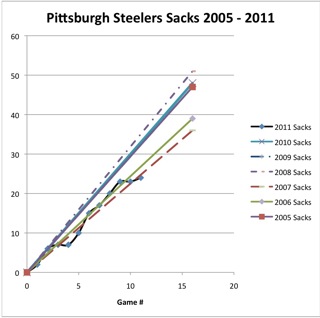 Well, that is the best news, in that it is tracking well with 2006 and 2007. Unfortunately, those are the worst two of the previous six seasons.

What does this all mean? If I had to hazard a guess, I'd say that it means that the 2011 Steelers are doing it the hard way. It seems that everyone who discusses this Steelers team, from Mike Tomlin to the various commentators, expresses surprise that the Steelers are currently 8-3 with such a poor turnover differential. [When I wrote that, the Steelers were 7-3 and the TO differential was a truly appalling -10, in case you had happily managed to forget. After last Sunday iit has moved up to -7, still pretty bad.]

So one might reasonably conclude that, particularly given the close scores in so many of their games, the Steelers are picking up some flukey wins.

But if you look at the Team Efficiency stats on Football Outsiders, it doesn't look that way. The Steelers, at 8-3, are quite comparable to their estimated win total of 7.5. This is, in fact, exactly the same as New Orleans, and much closer than Green Bay, whose estimated win total is 9.1 at the moment (with 11 actual wins,) or San Francisco, with an estimated 7.1 wins and 9 actual ones. In other words, the Steelers have gotten a break or two, but the record is pretty consistent with the team strength as calculated by other measures.

And the fastest way to change the course of a game is to take the ball away from the other team, as we all know. But the Steelers are mostly giving the ball back to the offense the hard way, by not allowing the other team to move down the field sufficiently far. Obviously they are giving up yards and some scores, but in the end we are seeing a lot more old-fashioned work in the trenches than we are the "splash plays" that everybody (including Mike Tomlin) loves so much.

Of course, we saw a whole lot of splash plays on Sunday night. Astonishingly, we saw almost as many interceptions as we had seen during the previous ten games—3 on Sunday to add to the preceding four. And frankly, without them I wonder if the Steelers would have escaped Arrowhead with a win. But you will note that there were still no fumbles forced, despite the defense's great play.

I wouldn't say that the NFL is targeting the Steelers (although many people would,) but it is clearly targeting the Steelers-style physical play, and I can't help but think that the constant fines have a dampening effect upon the players' desire to tackle really hard. If you are a conspiracy theorist and believe that the Steelers are being unfairly targeted, then it would only confirm that to see that the effect wasn't as marked for most teams in the league. Feel free to interpret the data as you like.

In the meantime, let's hope that the new-found enthusiasm for taking the ball away continues, even with better quarterbacks. And let's also hope that the offense will make a lot better use of the balls they get back than they did on Sunday. It would certainly make life easier on us fans, although the purveyors of Maalox and Tums might lose out. But it seems that this team knows how to get it done, even if it isn't pretty. And in the end, that's a pretty good recipe to take into the post-season.