There were a bevy of great defensive plays in Pittsburgh's 35-7 Week 13 win over Cincinnati. A few stood out a bit more than the others, with a few showing great execution from multiple players and some just showing good old fashioned disciplined football.

Here are the Steelers' top five defensive plays from Week 13.

5. Polamalu and Farrior High And Low Coverage of Gresham

It's 3rd and goal from Pittsburgh's 10 yard line, 10:09 remaining in the 1st quarter of a scoreless ball game. 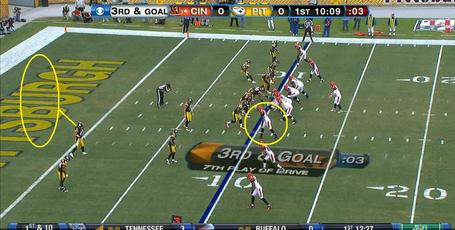 Cincinnati is on the doorstep. A false start by WR A.J. Green nullified a touchdown pass from Andy Dalton to Jermaine Gresham on a previous play. The Bengals line up with five WRs, and the Steelers counter with a man coverage scheme with Polamalu looking to play the ball over the top.

Gresham is in the left slot, Farrior is four yards off him. Polamalu is cheating to that side, expecting the Bengals drew up a play to their stud red zone receiver.

He was right. At the snap, Gresham releases, and Dalton never takes his eyes off him. He cuts to the outside briefly, then back inside, looking for a pass over the top. Farrior and Polamalu play like the veterans they are. While Gresham easily has five inches on either of them Farrior cuts off a shallow pass, while Polamalu is in perfect position to handle a catchable pass up high.

Dalton's pass is high, but Polamalu's position (right on his legs) on Gresham does not allow him to jump very high. Even if by some miracle he comes down with the ball, Polamalu would be there to knock it away as he came down to the ground. It would have been a shame to see Gresham victimized by the Calvin Johnson Rule twice this season, so Polamalu just didn't give him a chance to catch it at all.

It forced a field goal opportunity (the kick was blocked), saving the Steelers from falling behind early. 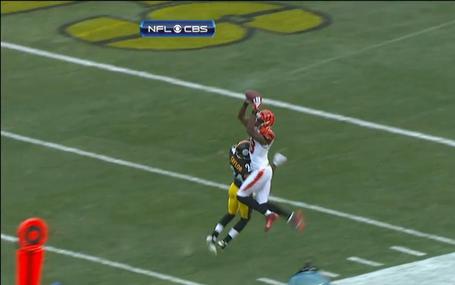 Cincinnati, despite the game slipping away from them, is putting together a nice drive that results in a touchdown. On this play, however, Steelers CB Ike Taylor plays a sideline pass to rookie phenom A.J. Green perfectly.

A few keys on this play. First, Green's size advantage over one of the larger CBs in the NFL highlights exactly why he was the fourth overall pick in the 2011 NFL Draft. Sometimes you just can't defend size. Green, at 6-foot-5, had a considerable advantage against just about any defender along the sideline.

Dalton throws to Green's back shoulder - meaning, he's throwing it behind the receiver enough where he can make a play on the ball in a location the defender cannot due to the angle he's likely taking - and he throws it high. A good, strong throw to the out sideline, when done properly, is essentially indefensible. It's also the hardest throw to make in football.

All the defender can do is close off the lower target with his body, and force a high throw. The tricky part on a backside shoulder throw is not over-pursuing the pass, because the receiver is coming back for the ball, and can easily draw contact. In those instances, the defensive back is taught to use the sideline as an extra defender. If Taylor can seal off all throws except the ones high and outside, the odds of a completion go down quite a bit.

Taylor does exactly that, while not interfering with Green. It's a good pass, a great catch but because Taylor had strong inside positioning, Dalton led Green just a bit too far outside, not giving him a chance to make the catch in bounds.

Cincinnati has the ball 2nd and 10 from midfield with 10:22 left in the game.

The Bengals replaced Dalton with Bruce Gradkowski partially due to the ankle injury Dalton suffered earlier in the game, but mostly due to the fact the Steelers were beating the tar out of the visiting Bengals, 35-7.

Gradkowski gets good protection, and, like Dalton, is looking to force a pass to Green. His eyes were locked on him as the Steelers were in tight man defense with two deep safeties.

Gradkowski escapes to his left, leading Jerome Simpson (covered by William Gay) and Green (covered by Taylor) around seven yards down the field.

Simpson and Green both end up near the sideline. FS Ryan Clark is charging in as Simpson breaks back inside, taking Gay with him. Maybe Gradkowski didn't see Taylor, who was now in front of Green after Gay clears out, but he throws a dangerous pass down the sideline.

Taylor catches the ball at its highest point (all defensive backs coaches cheer loudly), making it another 2+ takeaway game for the Steelers.

2. Harrison Gets A Little Help

Cincinnati has the ball first and 10 from their 39 yard line with 11:45 left in the third quarter.

It's all falling apart for the Bengals, and Pittsburgh has its foot squarely planted on Cincinnati's throat. The defense is in full attack mode, and Defensive Coordinator Dick Lebeau dials up a perfect blitz for the situation.

The Bengals are in an unbalanced line, with OTs Anthony Collins (outside) and Andrew Whitworth flanking the left side of the line. James Harrison is tight on the offensive left side, and CB William Gay has inched up to the line of scrimmage, showing press coverage on Gresham, who's split out to the slot. Farrior is over center, about four yards off the ball, looking for the run.

At the snap, Gay blitzes, but in true Lebeau fashion, his intention is not necessarily to get to the quarterback, but rather, to draw the outside tackle and running back away from Harrison.

Dalton gives a play fake, which Farrior bites on, and makes the decision to attack the same gap Harrison is currently working to get through. Farrior ends up beating G Nate Livings, and smashes into Harrison, as he's tied up with LT Andrew Whitworth. Farrior's impact on Harrison knocks Whitworth to the ground, freeing up Harrison to get after Dalton.

Although Farrior may have misdiagnosed the plays intentions, the attention the Bengals paid to Gay on the outside weakened their inside pass protection, thus killing the play, and giving Harrison one of his three sacks on the game.

The Bengals have the ball 3rd and 10 from their 23 yard line with 12:31 left in the second quarter. The Steelers have a 7-0 lead, but getting the ball back after three quick plays leads to one of the most successful quarters in recent memory.

The momentum has completely swung in Pittsburgh's favor, and this play, while not eye-popping in terms of statistical gains, was essentially the straw that broke the Bengals' backs. To stick with the overpowering Steelers, Cincinnati really needed to covert this first down. Their game plan seems to be a tad conservative, even with a 5-WR set. The Steelers are in a deeper zone, conceding shorter passes to keep them from making a play deep down the field.

Before the snap, the Steelers front seven is oddly set, with Farrior well outside the outside shade of Gresham, who's on the line in the slot. OLB Jason Worilds is outside RT Andre Smith's outside shoulder. DE Ziggy Hood is the only down lineman, over the center. DE Brett Keisel and OLB James Harrison are mirroring Farrior and Worilds on the offensive left side. CB Cortez Allen is head-up on Green in the left slot. ILB Lawrence Timmons is about two yards off the ball, over the right guard.

The Steelers are showing a double overload blitz, essentially looking to out-flank the Bengals offensive tackles. There are no in-line tight ends or running backs in the formation, so Dalton assumes they're simply going to come off the edge.

At the snap, Keisel stunts to the inside, just as both C Nate Livings and LG Kyle Cook follow Hood, who stunted to the outside. Timmons drops right into coverage on Gresham - Dalton's hot read. Livings cannot get back to Keisel in time, giving him a free rush at the passer.

Gresham either does not recognize the blitz, or simply cannot get to an out pattern fast enough. Dalton may have been able to get a pass off but Keisel quickly blocks that window with an outstretched hand, giving Dalton no choice but to escape the quickly collapsing pocket

.Dalton turns up field and tries to scramble for first down yardage, but Hood breaks off his block, and takes him down for a two yard gain.

Excellent coverage down the field, and a perfectly executed blitz got the Bengals off the field for a critical 3-and-out series for the Steelers defense.