Steelers vs. Browns: Five Players to Watch in Pittsburgh's Game Against Cleveland

Share All sharing options for: Steelers vs. Browns: Five Players to Watch in Pittsburgh's Game Against Cleveland

What a difference a week makes. After the Steelers were questioned as a title contender following a rough outing against Kansas City, they rebounded nicely in dominating the Bengals. Behind a strong running game, big plays from the special teams units, and a mistake-free day by Ben Roethlisberger and his receivers, the Steelers stayed on the heels of the Baltimore Ravens for the AFC North crown and possibly the No. 1 seed in the AFC.

But a short week gives Coach Tomlin's ensemble little time to rest on their laurels after the convincing win against the Bengals. The Cleveland Browns come to town on the Steelers' annual Thursday Night game, and cannot be overlooked. Who could forget that dreadful Thursday night in 2009, when the Steelers reached the low point of their season by losing their fifth straight, 13-6 to the hapless 1-11 Browns at Heinz Field? If the Steelers still want to have a shot at winning the AFC North, this history cannot repeat itself.

The situation in Cleveland might not have changed all that much since 2009, but Pittsburgh is coming to this game with considerable momentum. The Steelers have won seven of their last eight, with their lone blemish being the heartbreaking last-second loss against Baltimore a month ago that many thought Pittsburgh had already won. During this eight game stretch, the Steelers beat quality teams, but also found ways to win on bad days against inferior opponents. On Thursday, they may need to do the same.

There's something about this old rivalry that has not gone away. While the Browns haven't been competitive for a long time, they generally come to play against Pittsburgh and little love is lost between these teams. Cleveland's offense has been stagnant this season, but their defense has showed promise and bothered opponents. Who would have thought that after week 13, Cleveland could boast the #1 pass defense? The Steelers cannot overlook this match, and these Five Players to Watch can play a big part in improving to 10-3. 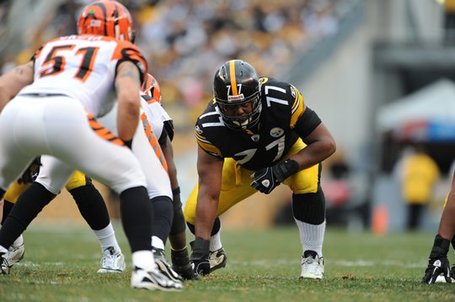 It already seems natural to see the Steelers offense line up with Marcus Gilbert at right tackle. This year's second round draft pick has established himself well along a shaky offensive line, and has become efficient in both run blocking and pass protection. Two weeks ago, Gilbert got well-deserved praise from offensive coordinator Bruce Arians after holding his own against Kansas City, and responded with some key blocks throughout the game against the Bengals. If he keeps up his performance for the rest of the season, Willie Colon will have a difficult time reclaiming his starting spot next year once healthy.
But against the Browns, Gilbert will have his work cut out for him. He will line up often against fellow rookie Jabaal Sheard, a second round pick out of Pittsburgh. Sheard has recorded at least one sack in 3 consecutive games, and comes off an impressive performance against the Ravens in which he recorded 9 tackles, 1 sack, and 1 forced fumble. In all, the young defensive end has 5.5 sacks and 5 forced fumbles to his name this year, ranking him among the top pass rushers of the 2011 NFL rookie class. What's more, his time in Pittsburgh has allowed himto get used to playing on the difficult natural gras of Heinz Field, and could lead to extra motivation when facing the Steelers on Thursday night. Containing Sheard will be Gilbert's top priority, and will play a major part both in giving Roethlisberger time in the pocket and avoiding costly turnovers. Another impressive game from Gilbert would be greatly appreciated. 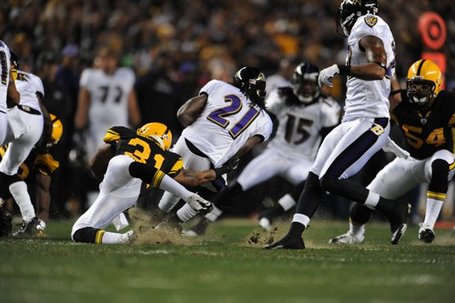 Since the Cincinnati game, I am firmly on the Curtis Brown bandwagon. The rookie cornerback came into the match with 11 special teams tackles, more than twice as much as any teammate this season. Against the Bengals, Brown followed up with a couple more tackles from the gunner position, including an amazing sequence in which he seemed blocked on a long punt, spun out of his block while falling down, and managed to tackle the return man for a minimal gain. That play pretty much sums up the importance of Brown's performance to a special teams unit that has quickly turned from a weakness into a strength.

Let's not forget though that a major reason special teams was considered a Steelers weakness was due to giving up long punt and kick returns, a good portion of them coming from Browns returner Joshua Cribbs. In a Pittsburgh win early in 2009, Cribbs returned a kickoff 98 yards for the touchdown and made the game closer than it had to be. The fateful Thursday night meeting featured the powerful return man even more, as he generated 200 all-purpose yards and got the game ball in leaving Heinz Field with a rare Cleveland win. A quick glance at this season as well as offensive and defense talent on both sides suggests that the Steelers should win this one easily, but that could quickly change with one big kickoff or punt return by #16. Disciplined special teams play, led by young gunner and emerging special teams ace Curtis Brown, can ensure that the game will be decided based on collective effort rather than one big play by the wrong guy. 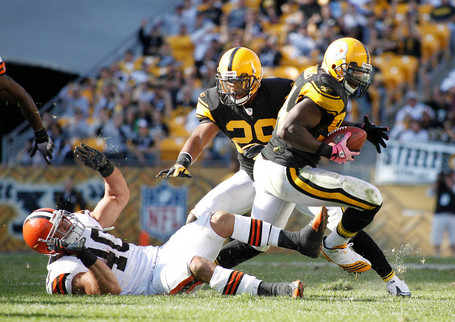 Quietly but effectively, Lawrence Timmons is settling back into his rightful place in the middle of the Steelers defense. After having to jump in for injured outside linebackers LaMarr Woodley and James Harrison earlier in the season, Timmons has played the last three games back at his natural position of inside linebacker and increased his effectiveness tenfold. While his tackle numbers don't jump through the roof, the fifth year linebacker has been disciplined in staying in running lanes, covering the flat against the pass, and making plays any time they need to be made.

As solid as Timmons has been playing, it's the splash plays that have been missing this season and that will ultimately decide whether he is earning his brand new $50 million contract in the eyes of the regular fan. Before the season, the young linebacker estimated that he could reach 10 sacks this season, yet he hasn't registered a single one yet. He has also been responsible for only one turnover, and surely expects more from himself. It could very well come against the Browns. The Cleveland passing offense, which will have to feature majorly should the Browns fall behind early, has been more than suspect this season, with Colt McCoy posting just a 76 QB rating. The vast majority of his passes have been underneath, as leading pass catcher Greg Little averages only 10 yards per catch and tight end Ben Watson is Cleveland's second leading receiver. Those underneath routes are often Timmons' responsibility, who could very well end up with an interception while sitting in the zone or covering Watson. At the very least, I expect Timmons' first sack of the season, establishing himself once again among the Steelers' big time defensive playmakers. 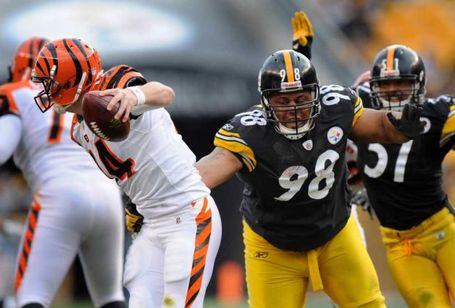 If I had a dollar for every time somebody told me that Casey Hampton has gotten old this year... Not that it is that far from the truth. Looking at the season as a whole, Hampton has not been able to command double teams as he did in the past, making the calls for drafting his replacement in 2012 sound pretty reasonable. But how about that game he had against Cincinnati last week? On a number of plays, I saw 'Big Snack' snuff out run plays and collapse the pocket, just like in old times. On a couple of instances he even got after Andy Dalton, who could only turn around and run away as fast as he could. On Sunday, Casey was his best, disruptive self.

But to be blunt, he has to repeat his performance on Thursday Night. Does anybody have any doubts that the Browns will try to run early and often against the Steelers to slow down the game, especially now that they have Peyton Hillis back and healthy? I image the Cleveland offense planning to keep the explosive Pittsburgh offense off the field as much as possible through using a healthy dose of Hillis, especially on first and second down to avoid long passes by McCoy. The former fullback is not the kind of guy that likes to bounce runs outside, feeling most comfortable when rushing downhill and between the tackles. That's where Hampton will wait, getting the first shot at tackling or at least slowing down the bulldozer that is #40. Holding the Browns offense to small or no gains on first and second down will put Colt McCoy in the uncomfortable position of having to convert with his arm, and he has not been effective this year doing so. Big Snack toying with offensive linemen as he did against the Bengals would make a huge difference toward atoning for 2009. 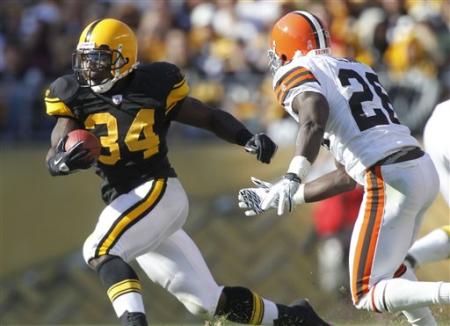 Rashard Mendenhall has been a frequent topic of debate among the Steelers faithful since he was drafted in 2008, and not just because of controversial remarks made this off season. The former first rounder posted back to back 1,000 yard rushing seasons in 2009 and 2010, his first years as a starter in the Steelers offense, and scored 13 touchdowns in an impressive 2010 campaign. Yet, he has often disappeared this year, as he has been accused of dancing around instead of decisively hitting the hole or fighting for the extra yard or two. He has had some great games, but they have been sandwiched by mediocre outings as Mendenhall is on pace for just 860 rushing yards this season.

Looking at the box score, one might think that Mendenhall had one of his typical average games against the Bengals (16 carries, 60 yards, 2 touchdowns). But that betrays the eye test, which showed him decisively hitting holes, cutting back, and fighting for every inch exactly like Steelernation had clamored for him to do. Perhaps no play sums up his performance better than the second touchdown run, on which he seemed stopped for no gain before cutting back and pushing his way into the end zone. The powerful runs of him and his beloved backup Isaac Redman, especially in the red zone, where a major part for why the Steelers were so effective scoring touchdowns against Cincinnati.

And the best part is that he has an easy chance to build on this performance, as the Steelers will face the NFL's 2nd worst run defense in Cleveland. Coming off a day to forget in which the unit allowed Baltimore gain 293 yards (including 204 yards by Ray Rice) on the ground, the Browns have been burned time and time again in that phase of the game. With his two scores against the Bengals, Mendenhall has now scored 16 touchdowns in his last 17 games (including the postseason). But as pointed out frequently by a certain fan on this site, he has never been able to rush for 100+ yards against an AFC North opponent. If that changes against a terrible run defense courtesy of the Browns, the Steelers will most likely walk away with a win.

As we all know, football remains a team game so more than these five players need to be on top of their game. The usual suspects Roethlisberger, Harrison, and Troy Polamalu all come off very impressive performances against Cincinnati, and look to make an impact against another divisional foe. Jason Worilds will likely once again replace Woodley after the latter aggravated his hamstring early against the Bengals, and Chris Kemoeatu figures to jump in if the injured Ramon Foster can't go at right guard. Who are your Five Players to Watch against the Browns?