Here's a little idea big_jay71 and I are trying to collaborate on to inform all of our fellow Steeler fans of who the Steelers may be seriously looking at in this year's draft. I'd like to thank Michael Bean for giving me the privilege of writing on the front page. The idea is that we're going to try and profile 5 guys projected to go in each of the 7 rounds that we feel are the most realistic options for Kevin Colbert and crew to make into the next great Steeler. So, to get the ball rolling I'll go ahead and present to you my thoughts on Mike Pouncey. 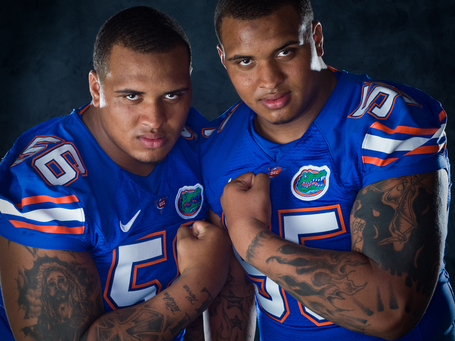 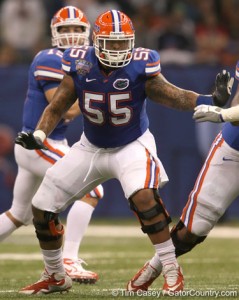 "He’s been telling me it’s fun, it’s not as hard as college was. Obviously, cause they don’t want to get you hurt," he said. "But he’s [Maurkice] been saying that the Steelers want to draft me, so we’ll see how it goes. It’d be a blessing, right?" -Mike Pouncey on his brother telling him about the NFL.

In case you've been living under a rock, Mike Pouncey is obviously the twin brother of our last first round-pick, Maurkice. In addition to this, the fact that the Steelers have a major need at Right Guard, Pouncey is the most-commonly mocked player to the Steelers in the first round. Don't cite me on this but I believe that this would be the first time in NFL history that twins, let alone brothers would be drafted by the same team in the same round in back to back years. The chemistry that would come with Mike being reunited with his brother would allow him to assimilate a little faster than most rookies as Maurkice could serve as a Florida-Pittsburgh dictionary in terms of playbook lingo.

Mike Pouncey decided to stay his senior year in college and take over the void his brother left at center when he declared for the draft. After struggling with snaps early on, Pouncey settled down and played solidly for the rest of the year. As a result most teams will see him as a guard in the NFL. Like his brother, Mike has no glaring weaknesses at the guard position. 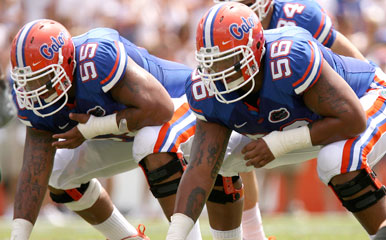 He's a jack of all trades and a master of none. He posses extensive experience, prototypical size and strength, and the same mean streak as Maurkice. From what I've heard he's a little more of a run-blocker but not as good in pass protection and not as fast moving laterally-this may be attributed to the fact that he's about 15 lbs heavier than his brother. It has also been said that he's not quite as quick as Maurkice in reading defenses and picking up blitzes. Still, he's capable in both fields and has plenty of room for improvement.

Pouncey could be selected as high as 17th to the New England Patriots, and with a number of teams from 17-30 needing some interior linemen it's not likely that Mike falls to us at 31. New England was one of the favorites to pick Maurkice Pouncey last year, but thanks to Kevin Colbert we ended up with a phenomenal center and New England didn't. Now this year it could be very easy for New England to secure Pouncey if they wanted to. With two picks in the first round (17th and 28th overall) and a plethora of picks in the 2nd, they really could move up anywhere in the first round (kinda like giving North Korea a bunch of nukes, or similarly, a chimp a loaded handgun). This coupled with the fact that Logan Mankins is most likely leaving the Patriots (think Alan Faneca post 2006) New England's front office is going to be devoting a lot of time to evaluating Pouncey. In terms of actual pick value I think Pouncey is more of a early to mid second rounder, but will be picked in the first because of Maurkice's immediate success this past season. So in that sense I think the Steelers should only trade up to get him if he falls to 24 or so. It would be a great, feel-good story to have the twins reunited once more but I think know that Kevin Colbert will not be influenced by the brother-brother connection alone if, in fact, he trades up to get Mike Pouncey.

Getting Mike Pouncey would be a great move for the Steelers if they get can get him for a good price-something along the lines of a trade up consisting of us sending a team our 1st, 3rd, and 5th for a 1st and 4th would be acceptable. Ultimately I think Pouncey will be a very good player in this league, but I don't think he'll be at quite the same level as Maurkice. He posses a very solid skill set already and has a high ceiling. Pairing him with a coach like Sean Kugler and a player like his brother, the Steelers offensive line could go from merely solid to one of the better units in the league. 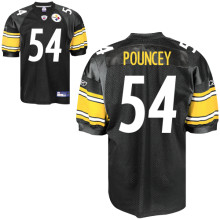