So we're about to hit the low point of the offseason in terms of news and action (though the CBA talks do help to pass time that would ordinarily be void of any interesting scrap of news), but BTSC is still cranking out tidbits and good reads on a daily basis. In an effort to (hopefully) continue this trend of positive momentum, I decided the next draft prospect I'd profile for you guys would be Jimmy Smith the senior corner out of Colorado who has made some massive leaps on teams' draft boards in the last couple of weeks. You may have noticed that Smith was pegged as the Steelers' first round pick in big_jay71's comprehensive seven round Mock Draft here on BTSC early this week. Several of you wondered if Smith was worthy of a first round pick by the Steelers or anyone else. Varied opinions are to be expected, but without further ado I give you my thoughts on Jimmy Smith..

Jimmy Smith was a 4-year player, and 3-year starter for the . He possesses a great family tree of football, having four brothers who played the game at the college level. Smith jumped onto the scene this year after following up a very strong junior campaign, allowing only 11 completed passes in those two years (source for that stat and scouting report) when matched up man-to-man. Smith has no known character issues and has been said to haven taken a leadership role recently in the Colorado locker room.

Looking at Smith the first thing that stands out is his size. On that fact alone, many will compare him to former Radiers and current free agent Nnamdi Asomugha. His blend of using that size and that speed seem similar to Asomugha at least at first glance. Where Smith excels is when he's matched up in man coverage, or 1-on-1 with a reciever. From what I've seen on youtube (videos will be posted below) and from what I've read, he does a very good job at jamming receivers on the line after the snap and runs well with them after initial contact. Overall he seems to be a very sound, consistent cover corner. Where Smith really struggles is in his run defense.

Despite being a solid tackler in space, Smith fails to use his size to his advantage more often than not, and gets taken out of running plays way, way too easily, as you'll see in the videos I post. He gets little to no push against smaller receivers acting as blockers. For some reason not many scouting reports call him out on this, but at least from the game film on youtube he just doesn't seem to be effective when setting the edge or attempting to disengage from a blocker, which is usually a receiver. It almost seems as if he doesn't want to play the run, something that is far more disconcerting if true than it just being a matter of lack of skill in that field. In terms of speed and ball skills, Smith seems to be adequate in both areas. He may not have blinding speed but his long strides and physical coverage style make up for that. In terms of intercepting passes, he only had just 3 picks in his 4 year career. 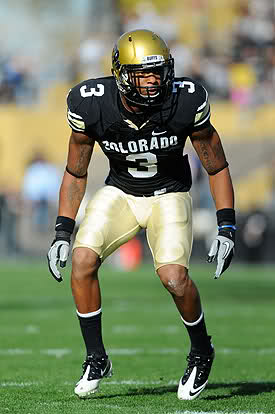 As I mentioned above, Smith has skyrocketed up into first round consideration in the past couple of weeks. I think teams are really falling in love with his coverage ability and want to compare him to Nnamdi Asomugha. Someone else (I can't remember who) presented me with a much more apt comparison and that was Antonio Cromartie minus the character issues. Simliarly to Cromartie, Smith is a good cover corner with what I think is a higher upside than "Cro", but also like Cromartie, Smith does not play the run well at all, even looking lackadaisical in the attempt at times. Smith can secure himself a slot in the top 25 if he can run about a 4.48 or faster in the 40 yard dash next Tuesday when defensive backs close out the combine workouts.

The thought of adding Jimmy Smith in the first round is not a bad one. The need for a cover corner is more than apparent following our loss to the Packers two and a half weeks ago, and Smith, while not being a ball hawk, provides that. It is up to the Steelers to decide if they can coach him up to be at least respectable in defending the run, or guage if he's even willing to try. If not, he will not be a Pittsburgh Steeler. If he's available at the 31st pick and guys like Brandon Harris, Mike Pouncey, Phil Taylor and maybe Aaron Williams are not, then I would approve of this selection. 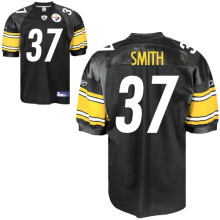 P.S. If I find the time I'll isolate the specific instances and the time each occurs in each video where I really don't like how Smith plays the run.