First I want to say thank you to HSS for putting out another great player profile, the last one about Colorado cornerback Jimmy Smith. So far he and I have covered the Offensive Guard, Nose Tackle, and Cornerback positions in the first round so I thought I would look at Offensive Tackle position and Miss. State's Derek Sherrod in particular. 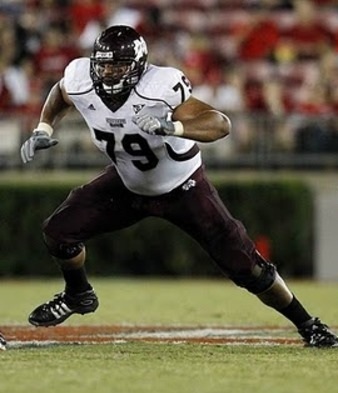 Pros: Out of all of the Offensive tackles with a first round grade Derek Sherrod may have the best overall skill set. A four-year starter at MSU, Sherrod played his freshman season on the right side before starting his sophomore season on the left side and never looked back. Athletically he has very good initial quickness and excellent pass-blocking technique as he is very fluid in his lateral abilities to kick out and seal the edge. Physically he has very good size and at the Senior Bowl he measured in with the longest arms of any Offensive lineman at 35 1/2 inches. Aside from his physical attributes he may also be attractive to the Steelers because of his high character. Sherrod graduated with a degree in Business with a 3.54 GPA, and won a National Football foundation post-grad scholarship. He was also highly involved with multiple youth events.

Cons: Where Sherrod tends to struggle most is in run-blocking. While he is very good at reaching the second level (a la Maurkice Pouncey), he has a tendency to let his pad level get too high. He'll need to get stronger in his lower base to become more effective in this area. However this may be an issue due to his body type. He has very wide shoulders but very narrow hips so I have questions about how much more power he could add to his lower base. Because of this I think his future in the NFL is as a Left Tackle only. 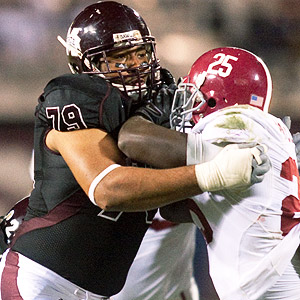 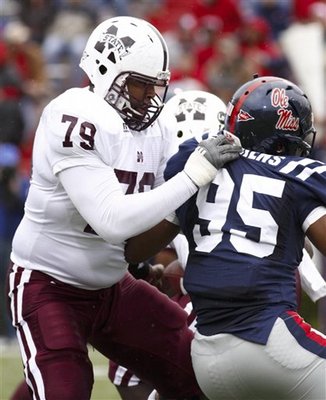 Draft Stock: In the 2011 draft there seems to be a lack of "complete" Offensive Tackles. Players like Nate Solder, Tyron Smith, and Anthony Castonzo are very good pass-blockers but are very ineffective at run blocking, mostly due to their lean body-types. And on the other hand you have someone like Wisconsin's Gabe Carimi who's an absolute mauler but does not have the athletic ability to be a blind-side protector at the next level. Sherrod is much better at pass blocking but isn't too shabby at run blocking either and with a little strength training could be a dominant Left Tackle for a long, long time. There seems to be a lack of consensus on the prospect rankings of the top 5 OT's in the draft. Sherrod could go anywhere as high as 13th to the Lions, 19th to the Giants, 22nd to the Colts, or 29th to the Bears which means that he may or may not be available at 31.

NFL Player Comparison: Russell Okung
Both players are very similar in size and overall skill set. Okung and Sherrod are athletic pass-blockers with the potential to develop in complete Left Tackles after working on their run-blocking. 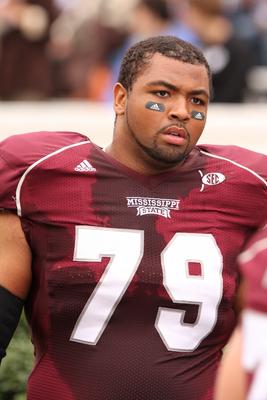 Final Word: Offensive Tackle seems to be a hot topic with most Steelers fans. Proponents will state that the team needs a true LT. I for one am in that camp. I've never been a fan of Max Starks as a Left Tackle, he just doesn't have the agility needed to protect Ben Roethlisberger's blind side. Even though Willie Colon missed the 2010 season with a ruptured Achilles tendon he'll still command a decent-sized contract as he's probably a top-5 RT. Last offseason he was pretty upset that he didn't receive a long-term deal which tells me he's not going to be giving the Steelers a home town discount. On the other side o the fence many people feel that drafting another OT would be a waste as we have Starks and Colon, assuming he resigns, and on top of that we'll have Flozell Adams for depth. Personally I thik the Steelers front office will let Colon walk as they will already need to hand out large contracts to LaMarr Woodley and Lawrence Timmons in the near future. With Colon gone that will leave only Adams, who's already 36 years old, to man the position which is just unacceptable. With Colon gone the Steelers could move Starks to the right side and draft Derek Sherrod to play LT, and use Flozell as our utility lineman. So I'll break it down like this, if we do not resign Colon then drafting Sherrod or another OT must be a priority regardless of Flozell Adams being on the team in which case we would probably have to trade up to secure him. If we do resign Colon then OT is not as much of a priority but if Sherrod fell to 31 and Pouncey, Phil Taylor, Brandon Harris, Jimmy Smith, and a lot of the other targets are gone I would be happy to take him. 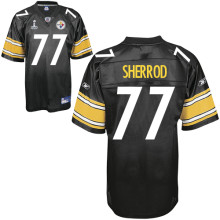