We're four days into the 2011 NFL Scouting Combine, so I thought I'd chip into the mock draft fever that has taken over the internet lately and give you what hopefully is a somewhat unique look at what I think the Steelers will do this April. Just an FYI -- I'm not going to do a whole lot of analysis on each player's skill set, but instead focus on why the Steelers might feasibly draft that player. The main reason for this approach is that with still close to two months until the Draft, I'd hate to take away an opportunity away from anyone to do a comprehensive individual write up/ 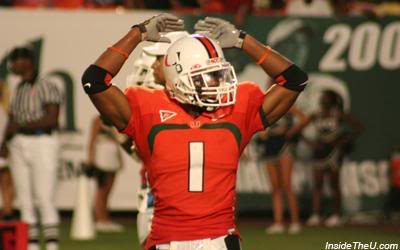 I've stuck with Harris (and it looks like seton hall and steelers and I are on the same page) as my favorite prospect for the Steelers to pick in the draft for the past few months, and I will continue that today. Though the Steelers may really need to consider drafting a tackle if Willie Colon is not retained, Pittsburgh under Kevin Colbert has always been a team that selects the "Best Player Available." At 31 it'd be hard to find a player that more aptly fits that term (and as I mention below I think we'll get at least one solid offensive lineman in free agency). Although once considered a top 25-pick (which he may still be by certain teams), Harris' stock has slipped as of late because of, according to Mike Mayock, "concerns" with his speed and his play in his final game at Miami in which he was abused by Notre Dame wideout Michael Floyd. My answer is that 1. don't kid yourself, Harris is a fast player.

I'm thinking he'll run at least a 4.42, and would be shocked if he didn't crack the 4.45 mark in the 40 yard dash. 2. Everyone has bad days. It seems that teams are now viewing Harris as somewhat of a "raw" prospect who has big time potential. On this team Harris could come in and play the nickel early on and be effective from day 1 as we slowly transition him to an outside corner position. The third reason he's has seemingly fallen is due to the hype surrounding Jimmy Smith. Many consider Smith and even Aaron Williams to be ranked ahead of Harris due to their size-speed ratios. I won't go too much further into detail as I'm hoping to get you guys a write-up on him after the Combine.

When comparing Harris to a current player, I like to think he falls somewhere in between Leon Hall and Darrelle Revis. I'd be happy if he were ever to be on the same level as Hall to be honest. Anything extra would be icing on the cake. The one downside to this is if he were really to fall to the Steelers at the 31st selection on draft day I've been telling some of fellow football fan friends that I'd attempt a backflip to express my joy. The 6 weeks of recuperation would be totally worth it if at the end of my hospital stay I could wear the jersey to the right. 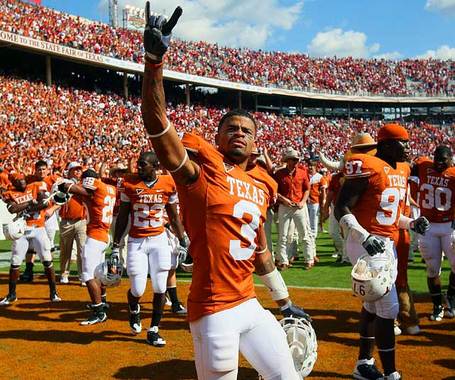 I know I know, everyone wants this to be Marcus Cannon or at least an offensive lineman. I wouldn't mind adding either one, but something tells me Cannon wont be there or the Steelers will pass on him for one reason or another, and the remaining offensive linemen will not be worth this selection. Just a hunch. Anyway, much like they did back in '07 when the Steelers took two OLB's in the first two rounds (remember, Timmons was initially drafted to be a rush LB), I think the Steelers will go back to the cornerback crop for this pick. This would secure the position for the long-term, and hopefully stop the likes of Goldilocks, Rodgers, and Brees from shredding our defense to ribbons. 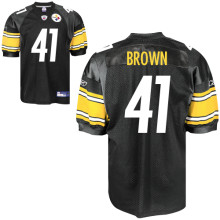 Brown, similarly to Harris is a very good man-to-man cover corner with great speed and maybe even better than Harris in zone coverage, but his lack of big plays at Texas have designated him for the second, and maybe even 3rd round. I really think in any other draft class Brown would have been considered a late first round pick, and maybe, with a good combine could elevate his stock somewhere near that neighborhood, but for now his name gets lost behind Peterson, Amukamara, Smith, Harris, and his Longhorn teammate Aaron Williams. I think that Brown is one of the more underrated players in this draft, and with proper coaching could really turn into something special. 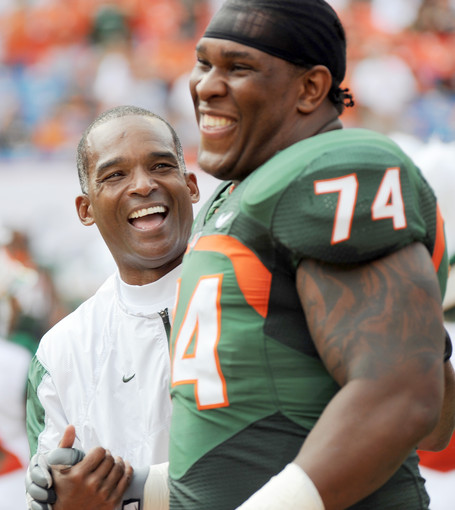 We go back to the "U" to address the lack of depth on the offensive line. I'll be honest and say that I haven't looked into Franklin that much, but from what I've read he possesses ideal size and strength for a guard or tackle and blocks well for the run. He's got a lot of technical issues with his game which could be fixed up by Sean Kugler. As long as he can surpass what Tony Hills has provided us for the past couple of years, he could be useful as a back up at either tackle or guard, and who knows maybe he could be the next Willie Colon. I believe a starting role wouldn't be out of the question, but a long shot, at least in his rookie year. I think the Steelers can afford to wait this long to draft an offensive lineman if they make a move and add a guy like Justin Blalock or Jared Gaither in free agency. 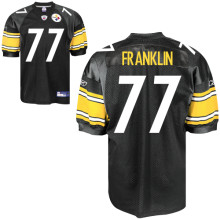 It all really comes down to Willie Colon and Flozell Adams and where they'll be whenever football is played again. Colon's agent says it's "unlikely" that Willie returns to the Steelers now that he's a free agent and Flozell doesn't know if he's going to retire or not. If we lose both then the Steelers will have no choice but to add a tackle earlier than this. I'm hoping we retain at least one and add one of the free agents I mentioned. If so Franklin would give us good value here.

This video's a little hard to follow but it's got some good stuff from him. 1:14 is the best IMO. 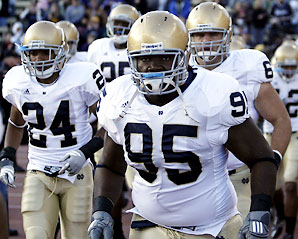 Ian Williams is an intriguing prospect to me. In more than one way he is a similar prospect to Casey Hampton; short, squat but powerful. Williams has that classic nosetackle build and style of play that will most likely elevate him higher than this pick, but if he were hear at the end of the 4th my guess would be that the Steelers give him a shot.

What I believe his role will end up being is not unlike the role Chris Hoke plays for us now. A backup NT that when called upon to fill in for the regular starter, does his job well enough to maintain the "standard". 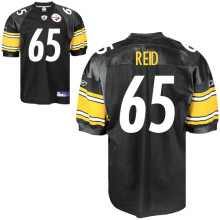 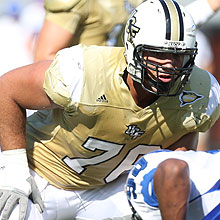 Another massive offensive lineman that could line up at either tackle or guard in this league, Reid is another player I haven't had the chance to look at a whole lot, but he's another guy that fits our system. I think Waltferfootball mocked the exact same pick here in his latest mock draft so apologies if it looks like I'm taking his idea. As you could probably guess by looking at Reid's size, his strength is in run blocking, although he's not awful in pass protection either. Again his versatility to play either guard or tackle would be important, that is assuming he could play both. I think by adding him we're just giving Kugler more of an opportunity to work his magic. 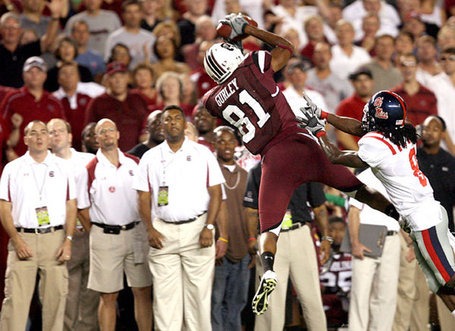 Pittsburgh has rarely ever had an effective target at the WR position that eclipses the 6'0" mark, the last dating back to Plaxico Burress way back in 2004. Certainly they've tried to bring in tall guys for Big Ben to throw to (Fred Gibson, Dallas Baker, and Limas Sweed all come to mind) but have had little to no success. Enter Tori Gurley, our version of Green Bay's Jermichael Finley. Gurley is a big kid who not unlike Finley, is a kind of hybrid; he's not quite heavy enough to play TE full-time, and he doesn't have the speed to line up as a #1 or #2 receiver all the time either. 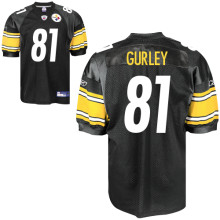 So why draft him then? Well Gurley should run somewhere in the 4.6's which would still be faster than Finley's 4.82, and Gurley has the hands and vertical to be successful in jump-ball scenarios on throws downfield and could be a deadly red zone weapon, an area where the Steelers have not been consistent in under the reign of Bruce Arians. I don't want to slight Gurley's blocking ability either, as he is no slouch in that department, and loves to play physically. Ultimately for the price of a 6th round pick you get a player who could push for the 5th WR spot with Sweed, Battle, and the 6'8" Wes Lyons, and if successful in doing so, you now have a weapon to create mismatches with on both run and pass plays all over the field. >UPDATE< Looks like Gurley weighed in at just 216 (he ran faster than expected because of it-4.56 unofficial), so this means he'll be used primarily if not strictly as a receiver. Don't think that will change his aggressive blocking style though.

Though I think the Steeler will ultimately draft a defensive end here, I really know very little about the DEs would be available at this point, so I'll go ahead and pick Joseph Barksdale. I know it's doubtful that we add 3 offensive linemen in the draft, but at least one of the 3 I have mocked to the Steelers will play guard, and I believe that is Franklin, Reid I'm not sure about and I think Barksdale will play tackle.

As it stands right now, apparently Barksdale is only worth a late round pick (what is it with LSU linemen these days?), but I think he could fit in this blocking scheme at the right tackle position. His size is what we look for in a tackle and he's a pretty strong player but from what I have read, technical issues and a lack of lateral speed drop him towards the bottom of the draft. Again, maybe Kugler can make something out of him, but he'd likely be a practice squad guy for a few years before seeing any kind of action.

Alright ladies and gents, that wraps up the first of several complete seven-round mock drafts for the Steelers here on BTSC during the lead up to April's Draft.