So I've got a number of photos and thoughts to share about Radio Row here at Super Bowl XLV. From my involvement with SportsRadioInterviews, I'd heard about Radio Row and was excited to see if it was as hectic and crazy as I was told it'd be. Absolutely it is. Radio Row is basically just one giant room in a hotel that's filled to the gills with people. Sports radio stations send their top guys down there to set up shop for the week, and as athletes and celebrities roam around the room, said stations try to pick them off and get them to come on the air.

Like I said, I'll be writing more about this particular facet of Super Bowl week, but first, a quick mention of a very large presence here on Radio Row: Michael Irvin.

Irvin of course can be found on the NFL Network, but he's also got a show on WQAM in Miami. As I made my rounds through the madness yesterday, I kept noticing that Irvin was constantly shaving his face with an electric razor. I noticed him do this at least three times within the span of an hour. At one point, right before going on the air for a quick segment on NFLN, Irvin barked out to his entourage, 'Where my clippers at?!?' Unfortunately I didn't get a good shot of this routine, but I did snap a picture of what his other grooming proclivities outside of shaving. 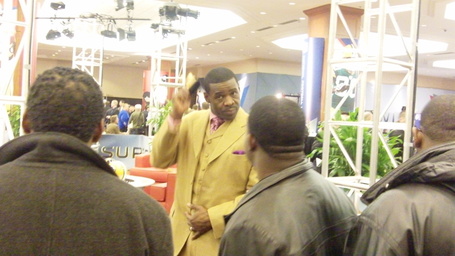 A few minutes later, I stepped outside to take a call and noticed a WQAM employee outside smoking. One of the interesting things to do (at least for me) is to furtively glance at everybody's media pass to see what outlet they're affiliated with. When I saw WQAM on this dude's tag, I asked him about Irvin and his clippers. Turns out, the guy just so happened to be The Playmaker's producer, and he accepted my request to interview him.