Below is a quick interview I conducted with former Steelers wide receiver Yancey Thigpen, who was making his rounds on Radio Row today as part of his involvement with the Gridiron Greats. Thigpen, who played for the Steelers for six seasons (1992-1997), finished with 222 receptions, 3651 yards and 21 TDs while in Pittsburgh, and was a two-time Pro Bowler while wearing the black and gold. Thanks to Yancey for a few minutes of his time today. 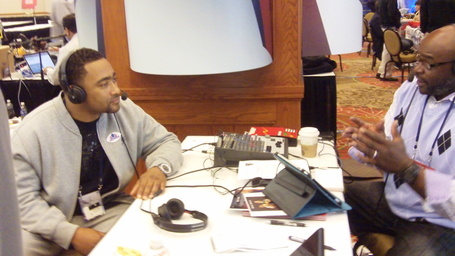 On still being a part of the Steeler family and the job that the Rooneys do making sure former players are still involved with the team long after their careers are over:

On if he's friends with Hines Ward and what he thinks of Ward as the leader of the Steelers receiving corps:

"I talk to Hines. I think Hines is an excellent player. I admire him, and I look forward to him coming out on Sunday and doing the things that he's always done. He's a consistent guy, he's done it year after year after year. He's a guy you can count on. I'm just glad he's wearing the black and gold. He's not one of these guys that doesn't want to mix it up. Hines Ward probably should have played back in the day when they wore leather helmets. He would have fit right in."

On Ward's work ethic and style of play rubbing off on the Steelers young wide receivers:

"Well that's the thing, you know what I'm saying. When you play with a guy like Hines Ward, you have to pick up your level of play. Here you got a guy that's been in thee league for tons of years, and you as a young guy, you can't let an older guy do something that you're not willing to do or you wouldn't do. Because they should be trying to do stuff that he doesn't do, which is everything. So I think Hines is a great leader, he leads by example. When you lead by example, the guys that should follow you tend to follow you."


On finishing with some solid career numbers despite playing in a run-first offense, and on if he would have liked to play with Big Ben in Bruce Arians' offense:

"Absolutely. I did have some good numbers for a run-first game back in the early and mid-90s. I would have loved to play with Big Ben and the organization that they have now, the players that they have now.  We have some great players now, but I'm just glad to be a part of it. I feel like I'm going for my seventh ring. Even though I don't have a ring, I feel like I'm going for my seventh. I have something on my resume that I'm not proud of: as of right now, I played for the only Steelers Super Bowl team that didn't win. So I'm feeling a little bad. But I hope the Steelers go out and get No. 7 on Sunday. And I think they will."