Steeler Nation Out in Full Force at Malarkey's Tavern in Dallas

Share All sharing options for: Steeler Nation Out in Full Force at Malarkey's Tavern in Dallas

Wow, what a day for Steelers fans here in Dallas. As I mentioned yesterday, Malarkey's Tavern in Dallas was hosting a huge party for Steeler Nation on Saturday. Ken Laird and Deshea Townsend aired their new show from noon to 2 pm and Tim Gleason had a book signing. But really that was just a fraction of the festivities that went on today at the undisputed premier Steelers bar in Texas. There were at least 250 people at Malarkey's for the four hours that I was there (12:30-4:30), and I can only imagine what the scene was like this evening as the party carried on until closing time at 2 am.

Nobody is as devoted to the Steelers as me. That's not to say that I'm more 'diehard' than other fans or anything like that. But bottom line is nobody spends as much time each week thinking and writing about the six-time Super Bowl champs. That said, I'm inexperienced in terms of attending events like this and seeing just how deep the passion runs amongst fans of the black and gold. After Saturday, I have a much better understanding of and appreciation for just how unifying the Steelers are not only in Pittsburgh but throughout the country as well.

Malarkey's was rocking all day long. In fact, at one point, Tim Gleason mentioned to me from his book signing table that it was hard to even hear himself think because of how loud it was. That was partly a product of the live band performing, but it was also because there was a loud and steady roar from the massive crowd throughout the day, The band played the Steelers Polka throughout the afternoon, and chants of 'Here We Go Steelers, Here We Go' broke out spontaneously on multiple occasions. My favorite was when a Packers fan wandered in, only to be surrounded by a sea of black and gold that was eager to remind the green clad couple that they were in Steelers Country. Local news crews stopped by to get footage of the action, and Good Morning America even dropped by to see what the fuss was all about. Rumor had it that Emmanuel Sanders and Antonio Brown were going to drop by and say hello to the huge crowd, but I left before I could confirm whether that was true or not. I hope so though, because Mary Rose told her father that she wanted to stay until the two young rookie wide receivers arrived.

Of course, current players have more pressing obligations, but there were a number of former players in attendance. Eric Green, Yancey Thigpen, Ray Seals, Ernie Mills, and Barry Foster all showed up to party, and fans flocked to their memorabilia signing table to snap photos and say hello. 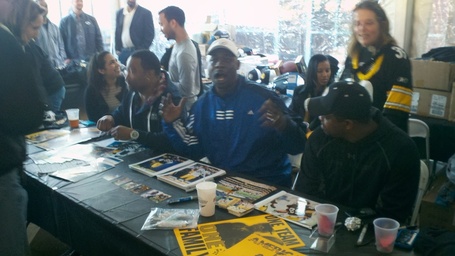 Gleason was seated next to them selling and signing books, some to people who had never read his stuff, and some to folks who knew just how special of a story teller and word smith maryrose is. Speaking of maryrose, Gleason's daughter was in attendance as well. It was great to see the young lady behind the screen name we've all come to know and appreciate so much here on BTSC. For a freshman in high school, she sure seemed mature. At one point, one younger and somewhat crazy fan asked Gleason to sign his jersey. I joked to Mary Rose that she better get a photo of her dad signing a jersey just like the former great Steelers players were doing just a few short yards away. Gleason's wife was also in attendance. A pleasure to meet her as well. After multiple years of corresponding with the man, it was most certainly a pleasure to get to meet him in person, even if he was busy. 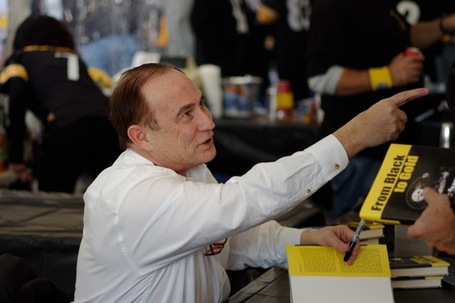 It was also a treat to meet acrollet, who's been a tremendous supporter of the site for quite a few years now. Adrian is momma rollet's son, and when I asked the director of Pittsburgh's most prestigious choir if I could buy her anything down here as a small token of my appreciation for all the great posts she's penned for us this season, she just said 'say hello to my son!'. I did just that. Gleason had met Adrian at a tailgate a few years ago and had mentioned how highly he regarded the young man. After spending an hour or so with him, I certainly agree. Many thanks to him as well for taking a few photos. 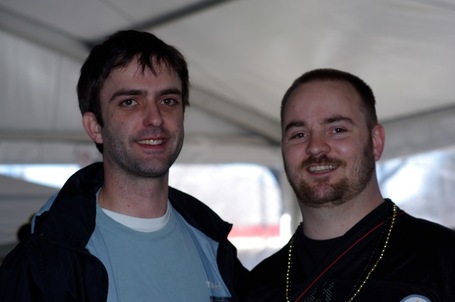 Anyway, I got a chance to join Laird and Deshea on air for the last few minutes of their show. Townsend is new to Twitter and is looking for some followers, so check him out at @desheatownsend . We didn't talk about much of significance, but I'm a big fan of Laird's programming, and you can count on me mentioning their show in the future. 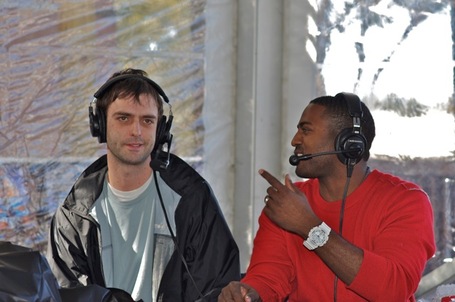 Oh yeah, after Townsend was on the air, he showed off another skill set when he joined the live band on stage for a little singing. He didn't sing the entire tune, but Deshea adeptly busted out the chorus to 'Run Sally Run' to the delight of us in attendance. And his performance was no joke. He was on key and timed his contributions perfectly. Fun stuff. 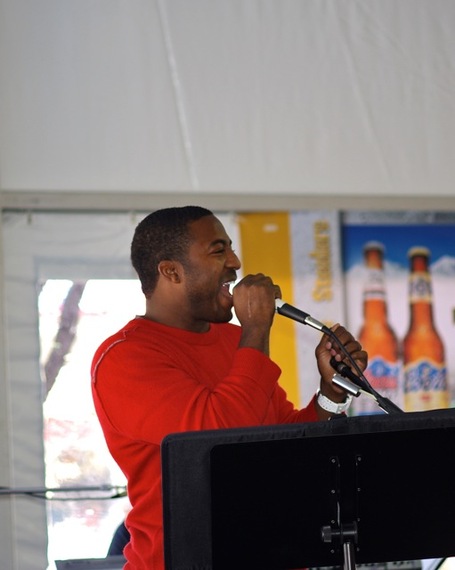 Anyway, in conclusion, it's been an amazing week here at Super Bowl XLV. I've been hard at work during the day and hard at work having fun at night :) It's hard to slow me down, but the last few days and nights definitely have taken their toll on me, particularly last night at the $500 a head 'Lace and Leather' party that a guy I work for paid to get me into. Tacky stuff of course, but visually entertaining nonetheless. In case you were wondering, we of course didn't have to pay that much, only because of the convenient fact that the weather kept attendance numbers down. That's a story for another day though.

I truly believe we're in store for a treat tomorrow night, but I'd yet to really have a great 'Steelers experience' down here in Big D. Saturday satiated my appetite for that, and now more than ever I'm proud and pumped up to be part of the greatest fan base in sports.