I really don't think any team should gamble on Blaine Gabbert in the top five of this year's draft, but he might make a lot of sense for the San Francisco 49ers at No. 7. Very nice writeup and thoughts from Michael Ulhorn, aka gimpsta7. Big thanks to him. Next up: The Tennessee Titans, represented by the fanpost machine seton hall and steelers. - Michael B. -

I grew up in the Bay Area outside of San Francisco. My grandparents had season tickets on the 50 yard line since Montana was Quarterback. As a Steelers fan suffering through endless years of Quarterback drama - from Kent Graham to Kordell Stewart, Tommy Maddox to Neil "I hate winning" O'Donnell - I grew up watching a revolving door of All-Pro gunslingers pass through San Francisco with Montana giving way to Young, who left the door open for Jeff Garcia. The Niners could do no wrong with whomever they put behind center, until of course they got cocky and let Garcia walk, then eventually Alex Smith failed because he had small hands, and they jockeyed countless castoffs trying to find someone to go with the relative skill they have at other positions. I reveled in this pain. I loved watching my ever-nagging friends finally feel the great pain of having a team without a Quarterback to get them over the hump. I enjoyed every minute until I didn't. Eventually my grandparents sold their tickets and moved away to retire, and I got sad reliving my childhood memories of Montana or Young passing to Jerry Rice for countless touchdowns. The Niners have been so bad for so many years, people occasionally pick them to win the Super Bowl in the preseason, only to watch them end up with the number 7 pick and a new coach. So here we go, trying to figure out how to remake one of the 5 greatest franchises in modern NFL history with a new coach, new GM and in my mock, new Quarterback.

With the 7th overall pick in the 2011 draft, the San Francisco 49ers select: Blaine Gabbert, QB-Missouri.

First, the niners need a quarterback more than any team in the NFL. The Bills have a suitable player. The Cardinals haven't gone as long without Warner as the Niners have without the Garcia-Young-Montana trifecta. And the Bengals are apparently not letting Palmer go. So the most desperate team is the Niners and they won't risk missing again by taking Newton - even if he were available in this draft.

Second, John Harbaugh can make a talented and accurate Quarterback a star in his system. The Niners underrated how good Jeff Garcia was for their system, so they let him go without ever finding a replacement. Harbaugh runs a similar West Coast system to those old Niners teams, and with a QB who hits over 62% of his passes, you are looking at some serious damage with an already solid supporting cast in the skill positions. Gabbert is only a Junior so he has room to develop and he will have time since no one is expecting Harbaugh and his 5-year deal to win immediately.

Finally, there isn't much of a need at other positions with value at this pick. They need a shutdown corner, but Amukama doesn't grade out as better value for this team than Gabbert - however Peterson would be the pick over Gabbert if he falls. They could use an offensive line upgrade, especially at left tackle: but there isn't a top-10 tackle, let alone one that could help more than Gabbert. And lastly, I would think about taking AJ Green (if available) or Julio Jones here, but who would throw to them? You can have all the talent at WR in the world, but if you don't have a QB, that doesn't matter. 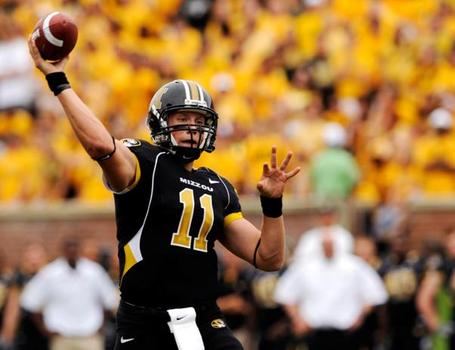