In my most recent post, I talked about the 1988 draft and how devastated I was with the pick of Aaron Jones.

Well, the draft wasn't the only thing bad about the 1988 Pittsburgh Steelers. The team finished with its worst record since 1969 at 5-11.

However, there was a silver-lining for yours truly. Because the Steelers had such an awful year, I had a chance to attend my first ever Steelers game at Three Rivers Stadium. I was 16 years old and I don't remember how my family happened upon these tickets, but I'm sure it had something to do with that awful season. Maybe they got them with a purchase of Tide. I'm not sure.

At this point in the season, November 13th, Pittsburgh was 2-8 and set to face their interstate rivals, the Philadelphia Eagles.

I went to the game with my uncle who is the same age as me and was attending his first game, as well. We didn't seem to mind the horrible year the Steelers were having. We were just happy to be at Three Rivers Stadium that day to see the game. Hey, I can think of a lot of things worse than taking in an NFL game for free even if the home-team is sporting a horrible record. 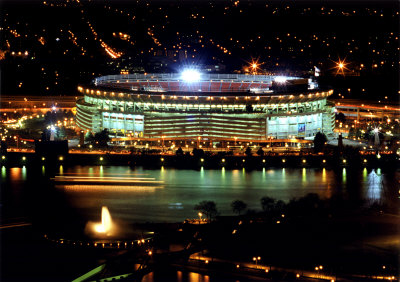 As it turned out, it was a pretty entertaining day, both on the field and in the stands. You see, our seats were on the visitors side and that meant that we were among many Eagles fans who made the trip to Pittsburgh to cheer on their guys despite Philadelphia's rather modest 5-5 mark.

My uncle and I didn't start any trouble, we knew better, but that didn't stop our Steelers brethren from mixing it up with the folks from the city of brotherly love.

In the first quarter, Pittsburgh jumped out to a 10-0 lead thanks to a Gary Anderson 52 yard field goal and a surprising Louis Lipps to Merril Hoge 13 yard touchdown pass.

Meanwhile, in the stands, the fighting never seemed to stop. My uncle and I had to stand up on our seats several times just so we could see because every time there was a fight below us, the fans stood up to get a better look at the action.

Back to the game. The Eagles responded in the second quarter and took a 14-13 lead into the locker room thanks to a Keith Byars 1 yard touchdown run and a Randall Cunningham 7 touchdown yard run sandwiched around another Gary Anderson field goal.

The fighting continued during halftime and into the 3rd quarter. It seemed like every time I looked up, another Steeler fan was getting out of his seat (yes, it was all men who were fighting that day) to go challenge a Philadelphia loud-mouth and the security guards in their long yellow coats would come by to break it up and usher the men out into the streets. It was like watching a Penguins/Flyers game, only it wasn't the players going to the penalty box, it was the fans.

The most memorable encounter was a Steeler fan tossing his beer in the face of an Eagles fan after the Philly guy punched the Pittsburgh guy in the mouth.

It was so bad that a woman from Philadelphia actually had the nerve to turn to my uncle and me and say, "Where is the security in this place? If we were at Veterans stadium this wouldn't be happening." Can you believe that? Talk about a hypocrite. I believe I said something like, "If we were at Veterans stadium, we'd be sitting in dirt right now." I know, pretty poor response, but that's all I could come up with at the time. Had I known that Eagles fans were so notorious for starting trouble that a jail-cell had to be installed at Veterans stadium, I may have come up with something better to say.

On the field, the second half was pretty exciting. The teams traded field goals but the Eagles still held a slight 17-16 advantage. Then the play that I will always remember from this game: The Steelers had the ball deep in their own territory when Bubby Brister went back to pass, scrambled around to avoid the Eagles' pass rush and found Louis Lipps down the sideline for an 89 yard touchdown pass. I can still picture that play in my mind. It was on our side of the field.

The Eagles answered in the 4th quarter with another Cunningham touchdown run. Pittsburgh regained the lead thanks to Gary Anderson's 4th field goal of the day. Luis Zendejas answered with a short field goal of his own to put Philadelphia ahead 27-26. The Steelers still had some life left and sent out Anderson, once again, to try a 57 yard field goal on the last play of the game. Unfortunately, it was blocked and the Steelers lost their 9th game to fall to 2-9 on the season. As soon as the game ended, my uncle and I made a run for it because we had to fight the crowd (not literally) and meet my grandparents at gate A.

So that's the story of my first trip to Three Rivers Stadium to witness a Steelers game. It was an exciting day despite the loss and certainly a baptism by fire thanks to the many Eagles fans in attendance.

The Eagles may have won the game, but the Steelers fans won the fights on a split decision.