Share All sharing options for: A Tale of Two Teams - The 2010 Pittsburgh Steelers, Game 6

This is the sixth post in this series about the 2010 Steelers. I apologize for the delay - I've been in Mexico, and discovered to my annoyance that you can't access your Game Rewind subscription there. I guess I won't be moving to Mexico... Anyhow, if you didn't see the previous posts, and wish to, you can find the fifth, a review of the first Browns game @ Pittsburgh, here. The fourth, a review of the first Ravens game by Michael Bean, can be found here: the third, detailing the very encouraging game @ Tampa Bay, can be found here; the second, about the defensive battle with Titans game, can be found here, and the opening win over the Falcons that gave us hope for the season can be found here. The premise of this series is that as the season unfolded we saw what almost seemed like two teams, and we were never entirely sure which one was going to show up to any game, or even at any given moment in a game. We are going back through each game and looking for a play or a drive that illustrates both Steelers teams. So without further ado, here is:

This game had to really, really suck if you are a Dolphins fan. It began with two turnovers, one on the opening kick return by Emmanuel Sanders, one on a sack/fumble of Ben Roethlisberger. Less than 3 minutes into the game the Dolphins had gotten the ball twice, and each time they only managed to get a field goal out of it. If only we could have held the Packers to field goals on our turnovers in February, the outcome might have been quite different.

This was quite an entertaining game to re-watch. About the only thing I remembered about it from the first time was the other part that sucks if you're a Dolphins fan - the infamous challenged Pittsburgh TD that resulted in a ruling that Ben had fumbled, but didn't give the ball to Miami. It is, of course, possible that the outcome of the game would have been the same had the ref given the Dolphins the ball, as there was still 2:30 to play and Miami had coughed the ball up themselves. However, they were leading at that point, and most likely would have ended up with the W if they had been ruled to have recovered the ball. The Steelers defense had clearly tired at that point, and was thin on the ground anyhow with injuries. It was hot and humid, the Steelers were forced to wear their black home jerseys, and both Henne and the running game were showing signs of life by that point in the game. But we'll never know, so on to the specifics:

Injuries: Trai Essex was still out, and Doug Legursky was his substitute. Brett Keisel was still out with the pulled hamstring, and Nick Eason started for him. About halfway through the third quarter, Aaron Smith left with an enormous bandage on his arm, and a collective chill went down the spine of Steeler Nation. After the game Mike Tomlin reported that it was a triceps tear. Ziggy Hood came in for him. Flozell Adams went out with an ankle sprain early in the second quarter, and Jonathan Scott came in at RT for the rest of the game. LaMarr Woodley left with a hamstring injury, and Jason Worilds played the rest of the game in his place. The coaches had been rotating the lines because of the heat, but after a while there wasn't anyone to rotate, particularly on the defense.

Team Jeckyll Play of the Week:

For the offensive play I didn't have any problems deciding whether to choose a passing play or a running play this week, because the running game never really got off the ground. There was a lot more to cheer the souls of the Steeler faithful in the passing game. One of these was the first touchdown of the game, during the second quarter - a beautiful throw to Hines Ward at about the MIA 14. Ward ducks a tackle by Benny Sapp, cuts in, avoids another tackle, and spins around to take it to the house, thanks in part to a block by rookie Emmanuel Sanders. But the play I'm going to feature is the 2nd touchdown to Mike Wallace, because it demonstrates just how dang fast Mikey is. Prior to the snap, cornerback Jason Allen doesn't like the look of the setup, and he decides that he'd better get a head start on Wallace: 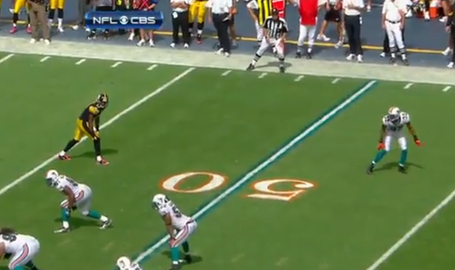 Although Allen had already started running, as soon as Wallace takes off he starts losing ground: 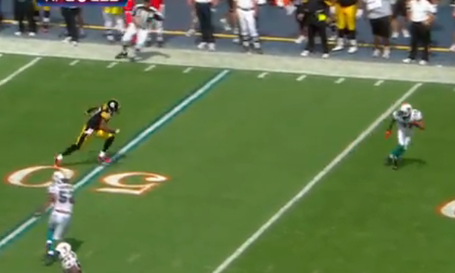 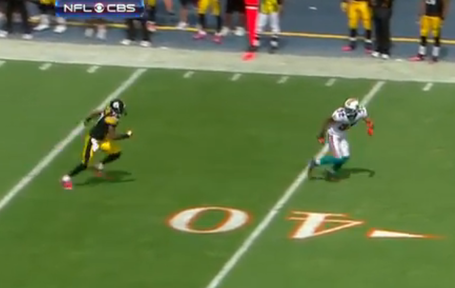 By the 30 Allen knows he's screwed: 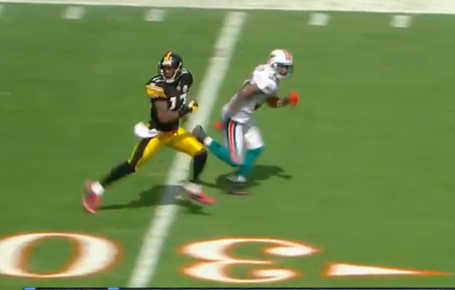 Wallace actually has to pull back a little bit at this point so as not to be overthrown: 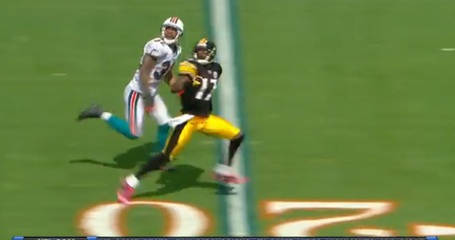 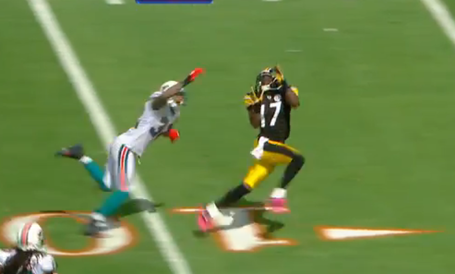 And all Allen can do is watch: 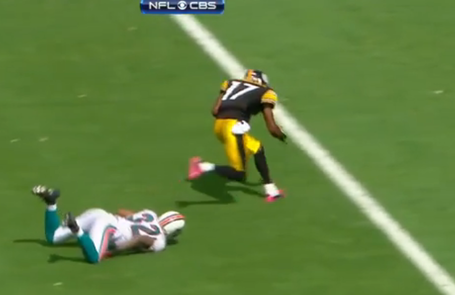 This touchdown was brought to you by the offensive line, who despite the loss of Flozell Adams gave Ben a nice pocket: 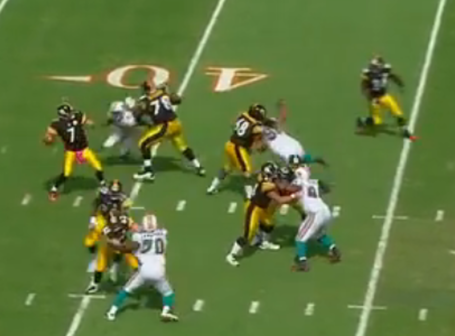 And Ben is pleased: 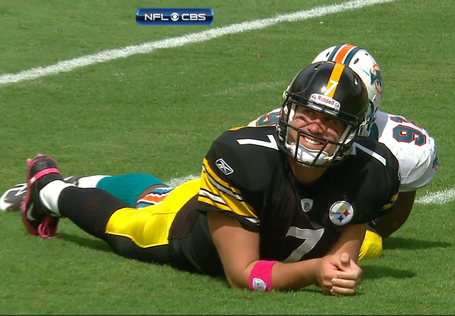 Between the snap and the TD, 6 seconds elapsed. The play began on the PIT 47. That is one fast dude... This was, BTW, the first play after Sanders' 37 yard return, so PIT officially had a 16 second possession. Wallace kindly gave the ball to a couple of kids in the end zone in Dolphins colors, and their father was not thrilled. You know the old saying - "No good deed goes unpunished." Allen, BTW, was cut from the team in November. You know the other old saying - "Speed kills."

The defensive Team Jeckyll play was probably the Farrior fumble recovery. It was near the beginning of the second quarter, and Brian Hartline caught a short pass behind the line of scrimmage. Henne chose the quick dump off because guess who was already breathing down his neck, about a second after the snap: 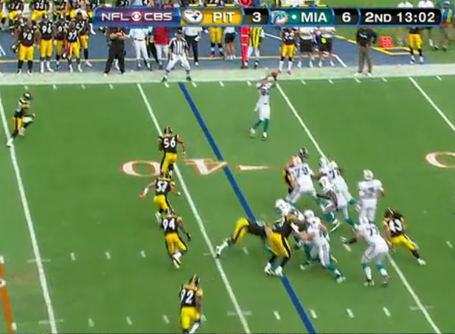 Yep - "if you see the hair, don't just stand there." You can see Woodley closing on the receiver, with Farrior right behind him. In the upper left corner you see Bryant McFadden. He and Woodley make a receiver sandwich: 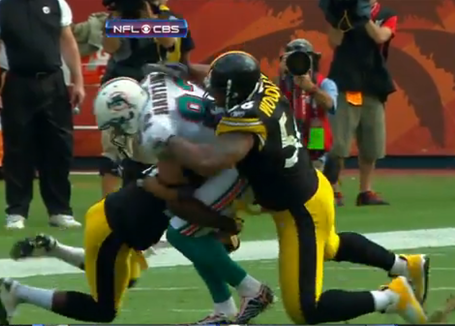 As they flip Hartline over in the kinder, gentler, Roger Goodell approved fashion, out pops the ball: 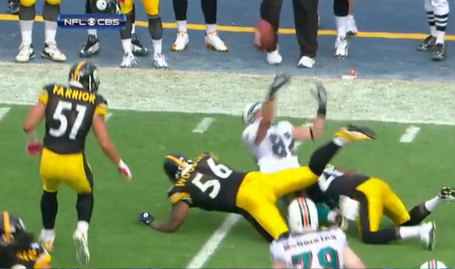 It floats gently into Farrior's waiting arms, and he runs 8 yards to give Ben the ball at the MIA 34. Sweet! With this interception, the Steelers have the most takeaways in the league.

The Good from Game 5:

Team Hyde Play of the Week:

Since I'm looking for the cracks in the armor of the Steelers, I have to go with a defensive series. The D was awesome in the earlier part of the game (combined, of course, with the Dolphins' O being absolutely putrid.) Despite the gifts of two fumbles within the first 2 minutes of the game by the Steelers Special Teams and QB, the Dolphins managed the following 2 series: Run, +1, Pass, inc., Pass, inc., Field Goal; Run - 0, Run + 8, Run - 0, Field Goal. The Dolphins didn't manage a first down until early in the 2nd quarter, despite getting the ball three times during the first quarter, during which they had 7 net yards of offense. So far so good.

But by their fifth series Henne was completing almost all of his passes, and although the 2 longer passes (9 yards and 19 yards) were stopped immediately, the short passes (-2, 4, 5) were all picking up a good number of YAC (10, 11, and 10.) Despite making it all the way to the PIT 4, the D held them to a field goal, but there were ominous signs.

The next series, at 5:47 in the 2nd quarter, ends badly. The Dolphins begin at their own 20 because of a TB. The first 2 passes are incomplete - the first was broken up by Harrison, the second Henne had to throw away because the blitz was getting to him. But his O line stiffened their collective spines and the rest of the passes in the series were completions, with a couple gaining good YAC because of sketchy coverage. Then comes the final pass of the series. The Dolphins are now at the PIT 26, and here is how it looks before the snap: 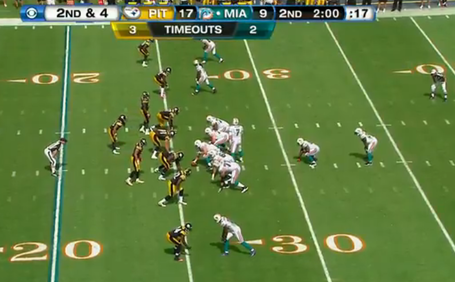 William Gay is on Davone Bess, who is the inside receiver on the right. After the snap we can see that Henne has a pocket, although probably not for long. He doesn't need it for long, though, as he gets the ball out in about 1 second: 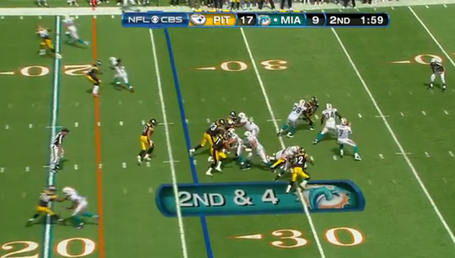 Bess is heading for the sideline, taking Gay with him, more or less. By the time the ball is in the air, Gay has gotten beat (you can see the ball between the 25 and 24 hash mark): 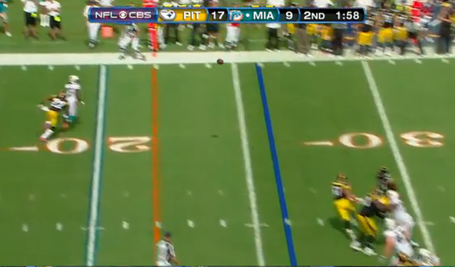 Gay gives it the old college try, but Bess shrugs him off: 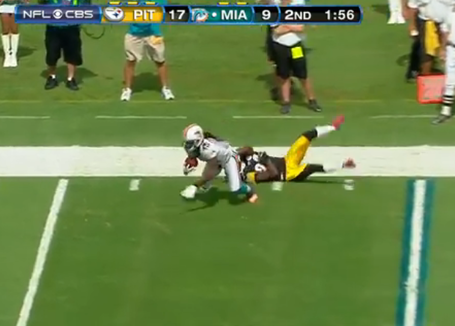 Bess takes off down the sideline, only to encounter Ryan Clark: 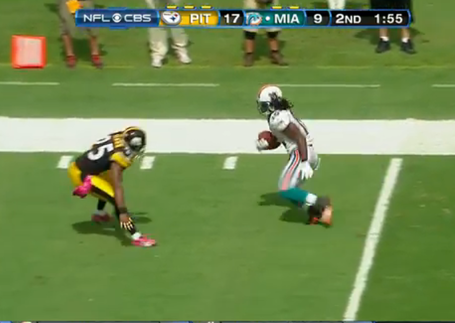 This should be easy, right? Er, not so much: 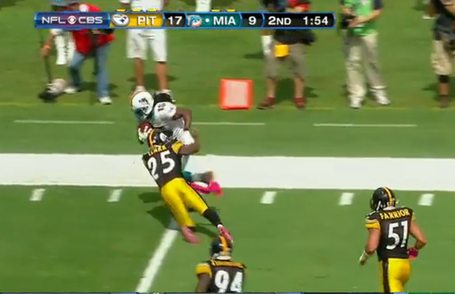 But thank heavens, the cavalry is coming, in the person of Lawrence Timmons. Unfortunately, as was so often the case with the cavalry, he got there just a little too late: 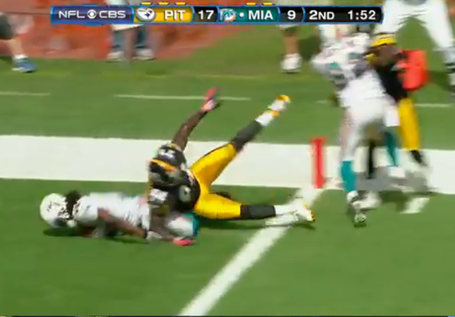 It is worth noting that this Miami series, culminating in their only TD, came a mere 16 seconds (in game time) after their previous series, because of the one-play Pittsburgh series. Our defense might have appreciated a bit more rest than that.

The Bad and the Ugly from Game 5:

There was a lot to like about this game, but the infamous goal line fumble and subsequent events cast a bit of a pall over the proceedings. But it was exciting to see Ben playing so well, and a relief to see Special Teams continuing to keep the opposition from unseemly TDs. And the Defense was demonstrating week after week that a) they weren't too old, and b) they were breathtakingly good against the run.