Thanks to Steel in FL for the prompt pick at No. 12. We're approaching the halfway mark. Keep up the great work lads and lasses. Next up: the Detroit Lions, represented by mississippi_steel. - Michael B. - 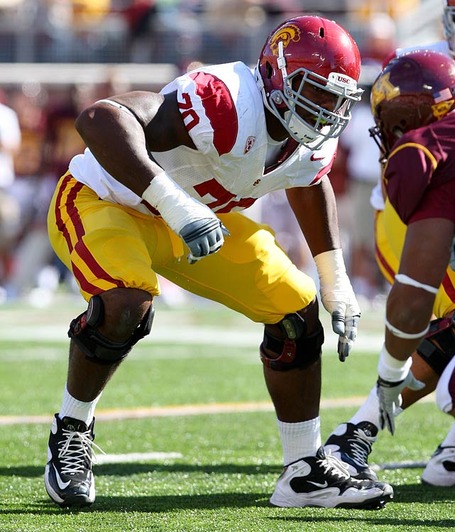 It's amazing how fast a team can fall. 2 years ago the Vikings were in the NFC Championship Game, now they have the 12 overall pick and holes galore. They need a QB since the TJack experiment failed as did Childress, and Webb probably won't be more than a ARE type of player. Unfortunately Locker and Mallet aren't worth the pick. The Williams Wall will be a combined 70 years old in October and they haven't drafted DT 2008 and that was in the 5th round. Beyond Winfield thier corners are lacking and or injuried making Jimmy Smith a possible reach. Sidney Rice is most likely gone, and even if he stays, the Vikings don't have much beyond him. Berrian is an over paid slot and Harvin when healthy, can't carry the team which makes Julio Jones likely. But, to me, the team will revolve around AD for the foreseeable future. So in an effort to make his job easier the Vikings will take Tyron Smith.