Hold the Phone: The Steelers Tender Offer to Willie Colon Will Almost Certainly Be Rendered Irrelevant

Share All sharing options for: Hold the Phone: The Steelers Tender Offer to Willie Colon Will Almost Certainly Be Rendered Irrelevant

On Tuesday, news broke that the Pittsburgh Steelers had used a first round tender offer to restricted free agent Willie Colon. As was to be expected, a conversation broke out amongst fans about what that all meant for Colon and the likelihood of him returning to the black and gold in 2011 and beyond.

Well, not so fast. There was a reason that I structured my free agent analysis of Willie Colon the way I did several weeks ago. In the post, I assessed Colon's future from the standpoint that he was going to be an unrestricted free agent once a new Collective Bargaining Agreement was ultimately reached. However, on Monday, I pushed John S. to publish the news that Colon had been tendered before taking time to really think if the move carried any real significance.  Had I done so, I might have decided to pass on the story, or ideally, waited until I collected my thoughts about the subject as I'm trying to do now. 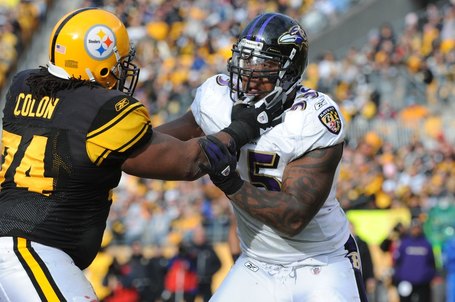 It wasn't until this afternoon that I finally realized that Colon's current restricted status could vanish under the new CBA. And for obvious reasons. In the comments section of that post I non-nondescriptly  wrote:

The new CBA may very well make him unrestricted rather than restricted. He would have been an URFA if not for the change in rules a year ago.

To expound upon that more thoroughly:  Colon should have been an unrestricted free agent after the '08 season. Maybe should is not the right word, but the man had four accrued NFL seasons under his belt, which for years was the benchmark for reaching unrestricted status. Not that year though. Here's what I wrote several weeks ago about Colon's story:

Unfortunately for Colon, sheer bad luck stood in the way of him signing an unrestricted free agent deal at about this time last year. Under the provisions of the last CBA, Colon's four years of service were no longer enough to qualify him for URFA status. Instead, Colon had to sign a one-year RFA deal last offseason that paid him a nice sum. But make no mistake about it: had Colon entered the league just one year earlier and qualified for URFA after the '09 season, he would have been able to find a suitor willing to offer a multi-year deal in the eight digits, with perhaps as much as $10-$15 million in guarantees.

Alas for the Bronx native, four or even five seasons no longer cut it. Six accrued seasons was suddenly the magic number before a player truly hit the 'open' market.

Even though your guess is as good as mine about what the new CBA might look like, while writing that post I felt confident predicting that NFL players won't have to sacrifice six years of head trauma inducing collisions and (relatively) marginal compensation financially before being free to shop their services around the league. I still feel that way, and perhaps even more strongly. It ain't happening. Not in a league where the average shelf life for players is fewer than five years.

Perhaps the NFL ownership and the NFLPA will split the difference and agree upon five years for URFA status, but you can bet your bottom dollar it won't be six.

This point was hammered home in my mind when I read Ed Bouchette's most recent article about how mutliple Steelers players will have to wait as long as half a calendar year or longer before seeing the roster bonuses they were set to make in early March. In the event of a lockout -- which we all agree is just a few short days away from being a reality -- guys like James Harrison, Maurkice Pouncey, and Hines Ward would have to wait for the first day of the new 'football year' before seeing those bonuses. Usually that's March 4th when free agency opens. But not this year.

More relevant to our conversation though is that Bouchette also mentioned the following in the article:

Colon was among those affected; he was restricted last year rather than unrestricted, and for the third consecutive year, the Steelers have tendered him a contract as such. He earned $2,198,000 last season.

A new CBA, though, is unlikely to make players go six years before becoming unrestricted free agents so the Steelers' tender to Colon likely will be rendered useless, ultimately.

"Obviously, the union doesn't expect that to be upheld," Metz said of the RFA tenders to players who have completed at least four years. "That was what the strikes in the '80s were for; they're not going to give that back."

Bless Bouchette of succinctly bringing this point up for us. We're in the business of forecasting as fans, and with the 2011 NFL Draft less than two months away, the prognostications and 'logical' assumptions are about to spike to extreme leves like they do every year around this time. Myself included.
The Steelers situation at tackle just so happens to be unusually complicated and intriguing. Three are free agents, one is owed over $7 million dollars in 2011, one is 36 years old. Crazy. And speculating about any of their futures inevitably requires making assumptions and best guesses about others. That's part of the fun, but in this instance, it would be particularly useful and a lot more fun if we carried on with the shared understanding that it's 99 percent likely that Colon will not be a restricted free agent in '11. That doesn't mean he won't be back in Pittsburgh, just that it's going to take more than a one-year ~$3 million dollar investment in '11 to keep him in the fold.

So, let's all just forget about Tuesday's news about Willie Colon being offered a qualifying tender for the 2011 season. You and I are more likely to win the lottery or walk on to the Steelers squad at Latrobe next season than there being a six-year waiting period before NFLPA members can become unrestrcited free agents.
Fine, maybe it's not that unlikely. But since we're in the business of 365-days-a-year speculation and discussion about our favorite team in the world's best sporting league, let's at least all agree that, moving forward, our conversations about Willie Colon should be directed by the overwhelming likelihood that Colon will eventually be granted URFA status under the terms of the new CBA.