Expecting the Unexpected: Dowling to the Steelers at 31?

Share All sharing options for: Expecting the Unexpected: Dowling to the Steelers at 31?

Okay so I'm coming down from the buzz off being accepted into my top college -- SUNY Oswego --  but I've decided to throw a change up and try to do something a little unique here with this post. The objective of this and similar posts to be published in the near future will be to take a look at some of the possible draft day moves Kevin Colbert & Co. may pull that could really surprise a lot of people inside and out of Steeler Nation. I don't know how many I'll have for you but I plan on getting out about five of these "outside the box" posts up over the course of the next month. Hopefully these unconventional takes on this year's draft will will stir some discussion and broaden our conversation.

Disclaimers: (1) This will not be limited to just the first round, and (2)  just because I post it doesn't mean I necessarily would agree with the decision or want it to happen. Quite simply, I will try to be objective as possible and give a solid case for and against each idea I throw out there.

Without further preamble, I will get this started with what the title of this post suggests: Will the Steelers actually consider taking Ras-I Dowling, a corner from Virginia in the first round? 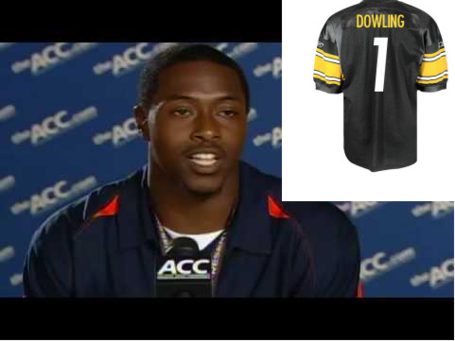 (In case you missed it, Dowling was already profiled here on BTSC by Jay. Before reading on, familiarize yourself with Dowling's skill set and projected draft status if you're encountering his name for the first time.)

Had Dowling entered the 2010 NFL draft class like many felt he should have, drafting him in the first round would come with very little second-guessing. A relatively clean bill of health coupled with the fact that 2010 was a pretty weak cornerback class would have made Dowling arguably the 2nd or 3rd best corner in the class.  Now in 2011, few give Dowling a first round grade and many are raising red flags on Dowling's injury-plagued senior season in which he only played 5 games. That's pretty bad I know, and it only makes it worse that his injuries were not confined to just one part of his body but in multiple places. In 2010, he sustained a broken ankle, a knee injury, and a bad hamstring. Certainly a concerning list of ailments that has most scouts running for the hills.

So where's the argument for Dowling? Well looking again at Dowling's 4 year career at Virginia you notice that the "durability concerns" really only surface in his senior year. He missed only 3 games in the other 3 years he played, and all were spread out and unrelated. So I'm gonna chalk it up to bad luck that ruined Dowling's 2010 season and that same bad luck that caused him to blow out a hamstring while running the 40 yard dash at the Combine back in February.

What really allows me to look past Dowling's durability is his skill set which embodies what the Steelers look for in corners. As Kevin Colbert mentioned to the Post-Gazzette:

Dowling's skill set to a T. Without just simply repeating word-for-word what big_jay posted several weeks ago on Dowling, his experience with zone coverage,ability to play the run, and standout character also make him a very intriguing player for the Steelers to consider. Dowling also answered the questions surrounding his straight-line speed by running in the 4.40's at the combine (4.40 unofficial 4.46 official), to go along with  his already high-end closing speed, and from what I've heard fluid hips (a rare find in big DB's which I'm told translates well in man coverage) which makes it sound to me like he's a complete package. But why at 31 you ask? Why not wait for him to drop to us at 63? Well if the Steelers can manage to nab him at 63rd even better, but I don't see him getting past a team like Oakland who own the 48th overall selection, and may see his measurables and believe he's Nnamdi 2.0. Add that to the rest of the teams drafting in between 32 and 48 with need for a corner and I find it unlikely that he slips past all of those teams.

I'll turn to our beloved Head Coach to try and translate just how real I feel this "Unexpected Possibility" is. Feel free to caption, I'd enjoy seeing what you guys can come up with. 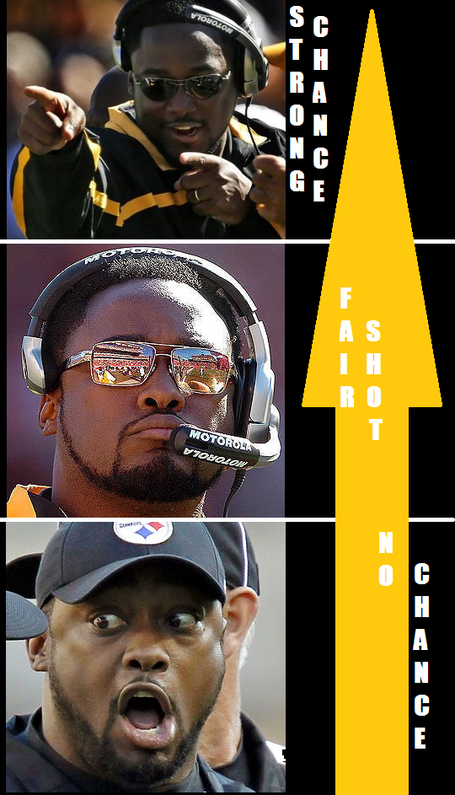 I'd say that the likelihood would fall somewhere between fair shot to no chance, in say, the 30-35 percent range, or somewhere in the very low end of the 'fair shot' range. It all comes down to how the Steelers grade his durability. If they feel like I do, and believe that his recent slew of injuries was more just a case of very bad luck, then drafting Dowling may become a very real possibility. I can't imagine that they're not already showing some interest. in a guy who fits the skill set they look for in a CB as well as he does. Since he hurt himself running the 40 at the Combine, Dowling was unable to participate in his Pro-Day, but I'd expect him to be visiting Pittsburgh for a private workout in the very near future so the men in the front office can get a first-hand gauge of where this guy fits into the league.

Photo 2: Mike Tomlin upon hearing the news his daughter got a 100 on a Spelling Test.

Photo 3: Tomlin reacitng to the news that Omar Epps dressed up in a Steelers t-shirt and swiped his paychec asd