Share All sharing options for: Tale of Two Teams - The 2010 Pittsburgh Steelers, Game 5

This is the fifth post in this series about the 2010 Steelers.  The fourth, a review of the first Ravens game by Michael Bean, can be found here: the third, detailing the very encouraging game @ Tampa Bay, can be found here; the second, about the defensive battle with Titans game, can be found here, and the opening win over the Falcons that gave us hope for the season can be found here.  The premise of this series is that as the season unfolded we saw what almost seemed like two teams, and we were never entirely sure which one was going to show up to any game, or even at any given moment in a game. We are going back through each game and looking for a play or a drive that illustrates both Steelers teams.  So without further ado, here is:

General game overview:  The big news of the day was the return of Ben Roethlisberger. All of the questions that had the commentators yammering away were answered.  Would he be booed? (Answer: not as such, although a few people protested in front of the stadium.)  Would he be rusty? (Answer: Some of his throws were incredibly on the money, some not so much, and he held the ball for longer than perhaps he should have part of the time.  He made plays happen where no possibilities seemed to exist. He got sacked, escaped a lot of potential sacks, and got knocked down on a regular basis. Other than actually throwing the ball away once or twice, he pretty much looked like Ben.)  Aaron Smith commented "It was nice to see him back out there, running around, running the offense. He’s so explosive. He can make big plays out of anything."

Cleveland's big news of the day was rookie QB Colt McCoy making his first NFL start.  The Browns, a club which just seems to suck the life right out of quarterbacks, lost their number one and number two quarterbacks with injuries to Jake Delhomme and Seneca Wallace. Making your debut in Heinz Field against the Steelers is probably not the situation that most rookie quarterbacks dream of, but McCoy put up a good fight.  At the end of the day he had 258 net yards passing, 1 TD, 2 interceptions, 6 sacks, and about a billion times being knocked down or hurried. The Cleveland game plan was to take some of the pressure off of him by using Cribbs in the wildcat, and in fact they did that a couple of times. Those times included the play early in the second quarter that was interrupted by James Harrison, thus removing Cribbs from the field for the rest of the day.

So young McCoy was on his own. He kept his poise and kept working, and I was impressed with him. I'm really glad it isn't my job to launder his jersey, however. Ben was asked after the game what he said to Colt in the post-game meet and greet, and he said "[I told him] I was proud of him. It was not an easy task that he had today, on the road against our defense...I thought he played well and to keep his head up and we’ll see him down the road."

Special Teams allowed an average of 20+ yards per kick return.  Conversely, we had two 19 yard kick returns, both by Emmanuel Sanders.  (There was still only 1 bone for 2 dogs, as Tomlin says, and Antonio Brown did not dress for the game.)  Daniel Sepulveda was a busy boy, with 6 punts, averaging almost 40 yards, with a long of 60.  Jeff Reed was not called upon for any field goal attempts, which was probably just as well, given that he was 0/2 in the previous game.  All four extra points were good.

Once again the stalwarts on defense held the opponent's star RB to many fewer yards rushing than he was accustomed to.  Peyton Hillis, who had 5 100+ yard games during 2010, who burned Baltimore in Week 3 for 144 yards and the Pats in Week 9 for 184 yards, managed only 41 yards against the Still Steel Curtain. Although a final score of 28-10 doesn't sound particularly close, the game wasn't even that close. The Browns managed a field goal during the last couple of minutes of the first quarter, taking an early lead, and then did not score again until the final four minutes of the game.

This game will long live in infamy, because of "The Head Shots Heard Around the World."  It turned out to be a very expensive game for James Harrison, as his helmet-to-helmet hit on Mohammed Massaquoi that sidelined the receiver with a concussion garnered him a $75,000 fine. An earlier helmet-to-helmet on Joshua Cribbs took Cribbs out of the game as well, but that hit wasn't flagged, as Cribbs was rushing when he was hit. There appeared to be a flag on the Massaquoi hit, but it was against Cleveland for Delay of Game, which seems to me to be adding insult to injury. (Massaquoi lost the ball, and an alert Browns player kicked it out of bounds, just in case, thus drawing the penalty.)

Since we discussed the fairness or lack thereof of the fines ad nauseum at the time, I won't review any of this, other than to say that it turned into our own version of "The Troubles," as the Irish might say. Harrison briefly threatened to retire and Steeler Nation was up in arms, but in the end the league kept fining players, including Harrison, until things changed.

Injuries: Trai Essex was still out, and Doug Legursky was his substitute. This was the sole injury entering the game, and was the sort of Indian summer before the winter of our discontent began.  A straw that showed the way the wind was blowing was an injury to Brett Keisel during the 1st quarter drive that resulted in a Cleveland field goal. It was a pulled hamstring, and ultimately kept Keisel out for six weeks. Ziggy Hood came in for Keisel.  Kemo, Legursky, and Eason all had injuries that took them out temporarily.  BMac was pretty slow to get up after a play late in the third quarter, although the medical staff didn't come out.

Team Jeckyll Play of the Week:

Once again there is an embarras de richess in this game, but since it is Ben's first game back, I will choose a pass TD.  They were all fabulous, but I have to choose the Hines Ward TD because it was not only a nice throw on Ben's part but was a touchdown because the Old Man has a nose for the end zone, as they say. Ward broke two potential tackles, taking one guy with him while he got the last few yards. All I can say is I want a hyperbaric chamber... 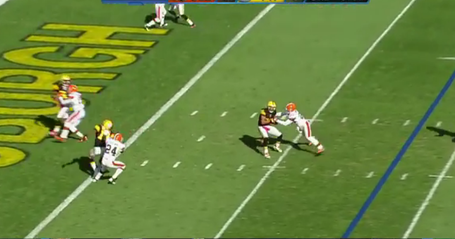 Here we can see that DB Eric Wright is coming in for a tackle.  But Ward twists away:

In comes Sheldon Brown, another DB, to have a go at it.  Ward is still dragging Mr. Wright...

And he's in, because a couple of pesky DBs aren't going to stop him.

Here's an interesting comment from Ben about that play: "...that was one where Hines ran the wrong route. He was supposed to go out, but we were on the same page, I thought he was going to come in and he came in. We got to the sideline and coach told us he was supposed to break out...if you get Hines the ball close he will do everything he can to get in." The Good from Game 5:

Team Hyde Play of the Week:

I decided to choose a defensive series, because it seems to me that it exposed what turned out to be a weakness in the defense this season.  It happened in the fourth quarter, in the series right after Mendenhall's TD.  The Cleveland drive began on their 30 yard line.  By this point Cleveland only had two wide receivers left, so that surely cuts down considerably the players you have to watch out for. (Admittedly, Hillis is also a capable receiver, as are their two tight ends, as we discovered to our sorrow.)  In the first snap, the pressure was getting to McCoy, so he took off running and gained 4 yards, with a stop by #43.  Second snap, McCoy is pretty well protected, looks around, spots Ben Watson coming across the field, and throws it to him.

Here's the field as McCoy is getting ready to throw - you can see Watson coming across right near the 40 yard marker.

Woodley was behind Watson,  Harrison upfield, and Clark coming in for a tackle. Rather than wrapping him up, Clark bumps him and falls down.  Watson takes off and is eventually pushed out of bounds by Polamalu and Woodley.  Now all of a sudden we are at the PIT 43 yard line. A 10 yard pass has turned into 23 yards.

Next, a short pass to Hillis behind the line of scrimmage picks up another three.  Three yards we can live with...

The following snap McCoy makes a nice throw for a 27 yard gain to Evan Moore, the other tight end, who ran a quick route along the sideline and apparently fooled both McFadden and Clark, as he was wide open. Now we're at the PIT 12. The first throw was incomplete, as he had to throw the ball away or take a sack.

In the next snap, he escapes the pocket (that's him in jersey #12).

He makes a great throw on the run to Watson, who is standing, orphaned, in the end zone. (McCoy is the guy to the left of the 10 yard marker.  You can see the ball at the point of the shadow of the guy upfeld from McCoy.) Strangely, Timmons was covering Watson, and instead of staying with him, he turned when McCoy scrambled and ran towards him, thus leaving Watson all by his lonesome in the end zone to haul in the pass for an easy TD.

When you can spread us out and beat us with a 70 yard drive for a TD with a rookie quarterback playing his first game, a couple of tight ends and your two most inexperienced receivers, that doesn't bode well for games with teams who have powerful passing games.  Admittedly, there were only 4 minutes left in the game and the Browns were four scores down just prior to this TD.  But if you're going to be out there at all, you might as well be competent. For one thing, you've given the upcoming teams a lot to chew on as they watch this tape...

The Bad and the Ugly from Game 5:

Good or Bad in this game, according to taste:

This is random, I know, but I got a big kick out of this - after the 1st TD pass to Mike Wallace - a beautiful 29 yard strike while Ben was under some serious pressure - Flozell picked Ben up like a rag doll and hugged him.  That's a seriously large man if he can make Ben look small.