With just a few weeks remaining before the 2011 NFL Draft, there's no need to stop with the player profiles just  yet. So to continue,  I thought I would again focus on defensive line prospects. I’ve already done profiles on Temple DE/DT Muhammed Wilkerson and Baylor NT Phil Taylor. Plenty have heard the name Jerrell Powe, and a fair number of you may even be fairly familiar with his skill set and collegiate career. But let's take a moment to take a closer look at the consensus 2010 preseason top-rated nose tackle. While Powe's stock may have fallen some over the course of the past eight months or so, he’ll still garner some consideration by many teams, including the Steelers, on days two and three of the 2011 NFL Draft.

Powe’s strength and girth make him an ideal candidate to play Nose Tackle in a 3-4 defense. His low center of gravity and power make him able to command constant double-teams and open lanes for his teammates to get into the backfield. He also does a good job of locating the ball-carrier in the backfield and shedding blocks. He has decent explosion off of the snap and displays a violent punch to knock opposing O-linemen back. 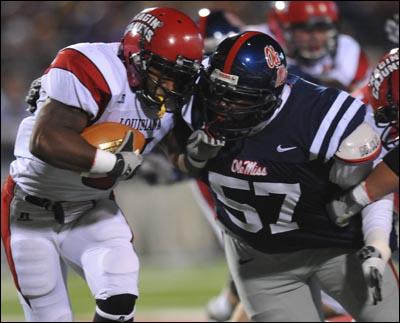 Cons: While his strength is a great asset it appears to be Powe’s only asset. He is no threat as a pass-rusher, lacks any kind of agility, and like most Defensive linemen of his size he wears down quickly in games which means he’ll only be a two-down player in the NFL. Unlike Baylor’s Phil Taylor, who’s very solid for a player of his size, Powe is noticeably overweight. Another red flag is his capacity to digest information at the next level.  On three separate occasions Jerrell Powe failed to gain academic clearance by the NCAA and has been diagnosed with Dyslexia. And because of his failure to qualify Powe will come out as a 24 year old NFL rookie, which isn’t too bad but not desirable to some teams. 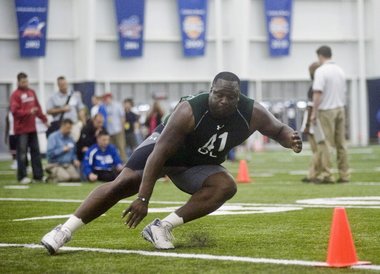 Draft Stock: Before the 2010 season Powe was slated to come off the board somewhere in the first round as the highest rated NT in the 2011 draft. Unfortunately Powe had a bad senior season and as such his stock has slipped at bit. Right now he’s expected to go off the board somewhere between the second and third rounds. A NT-needy team like the Texans could jump the gun and take him in the second round at pick 42 but it’s more likely he’ll be available when the Texans pick again in the third round at 73 (which incidentally is where I have him going in the latest addition of my 7-round mock draft.)

NFL Player comparison: Baltimore Ravens NT Terrence Cody
Their stories are similar. A season before they were slated to go into the NFL draft they were rated at the top NT’s in their respective classes but weight and work ethic concerns have caused their draft stock to slip. With their shirts off it’s easy to see why those concerns are apparent. Jerrell Powe could also be compared to Steelers NT’s Casey Hampton in that he doesn’t offer much in the way of pass-rushing but his ability to command a double-team would make him an ideal for any 3-4 defense. 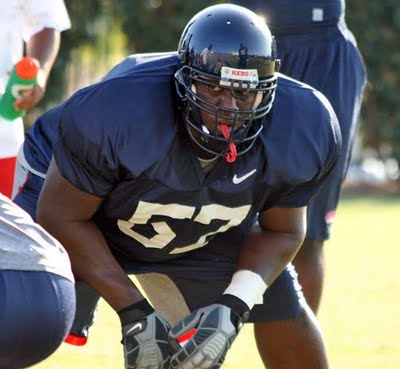 Final Word: In my opinion Jerrell Powe has a high boom or bust rate. Like Casey Hampton he’ll need to have his weight scrutinized every year so he doesn’t balloon up to 350lbs and may even need to have a weight clause added to his contract like Terrence Cody. Having said that I think he could be an heir to Casey Hampton wide throne as he is the typical two-down, space-eating Nose Tackle. However I wouldn’t consider taking a chance on him until the late-3rd round. If for some reason Powe were to slip to the 95th pick I would have no problems with the Steelers taking a chance on him as at that point he would be worth the risk. But given his age, where he’ll be a 24 year old rookie, I don’t know that the Steelers Front Office would feel the same way. Recently it seems like the organization would prefer to take younger rookies, 20-21 years old, so that they can get the most out of their careers in the long-term.