Expecting the Unexpected: What if the Steelers took a Running Back in the First Round?

Share All sharing options for: Expecting the Unexpected: What if the Steelers took a Running Back in the First Round?

Recently I read an article suggesting that the Steelers could in fact take a running back in the first round of the upcoming 2011 NFL draft. It got me thinking and I’ve decided to explore the notion a little further. I’m sure that the very idea of taking a running back, let alone on in the first round, would make most of you reading this shake with anger.

Now given the Steelers needs it seems absurd that they would even consider doing such a thing but as they article suggests they have done it before. Entering the 2008 NFL draft the position of running back was considered a slight need only because the Steelers lacked a traditional power-back for goal line situations and for someone to occasionally spell "Fast" Willie Parker. Parker had come off of three consecutive years with at least 1,200 rushing yards. If it weren’t for a fractured tibia against the St. Louis Rams in the second-to-last game of the 2007 season Willie Parker probably would have ended the year as the Rushing Champion.

During the 2008 draft it seemed likely that the Steelers would target a cornerback to compliment Ike Taylor or Offensive lineman to fill the void created by the loss of Alan Faneca at Guard in the first round (sound familiar?) and select a running back somewhere in the later rounds to fill that particular need. A couple of the names I read floating around the various draft pages at the time were Pitt Offensive Tackle Jeff Otah, Kansas cornerback Aqib Talib, South Florida cornerback Mike Jenkins, or even North Carolina DE/DT Kentwan Balmer. None of them had the Steelers selecting a running back in the first round. Now granted most draft pundits had Illinois running back Rashard Mendenhall going in the top 10-15 picks, second in the draft class to only Arkansas’ Darren McFadden.

The only running back that was given any consideration in the first round for the Steelers by the masses was Oregon’s Jonathan Stewart, the cream of the 2008 draft class’ crop of power-backs. But given how effective Parker was in the previous three seasons and the other more dire needs at other positions it seemed like a wasted pick to take a running back in the first round. As the Steelers came on the clock at pick 23 Otah, Talib, and even Stewart were already off of the board. In today’s situation I could hear everyone in Steelers Nation clamoring for the team to trade back, acquire more picks, and get better value for a player of need with all of the Steelers targets seemingly gone from their draft board. Instead the Steelers held true to their drafting philosophy and selected the best overall talent available that fit any sort of need whether it be immediate or in the near future. With three full seasons in the books I think the selection of a running back in the first round has worked out pretty well for the franchise so far.

But now you ask, why would the Steelers select another running back when Rashard Mendenhall is 24 years old and just now entering the prime of his career? Well I suggest it because; a. the Steelers have a habit of drafting talent over need, b. at the end of the first round a running back may be the best talent available, and running backs have the shortest shelf-life of any other position in football. All of the Steelers potential targets for the first round of 2011 NFL draft, Florida Guard Mike Pouncey, Wisconsin Tackle Gabe Carimi, Baylor NT Phil Taylor, and even Temple DT/DE Muhammad Wilkerson could and probably will all be gone by the time the Steelers are on the clock. So if the Steelers feel that one of the available running backs on the board is a superior talent to the 6th highest rated Offensive lineman or the 5th highest rated cornerback then why not take him?

From a positional standpoint it never hurts to have two stud backs in the stable. Looking back at the 2008 draft it worked out well the following season for the Carolina Panthers. The Panthers had a 24 year old DeAngelo Williams at running back and still drafted Jonathan Stewart in the first round. That year they went 12-4 and if it weren’t for former Head coach John Fox’s inability to replace a declining Jake Delhomme or find a suitable complimentary WR for Steve Smith they would certainly be in a much better position than they are today.

Last season Mendenhall carried the ball 324 times in addition to 23 receptions. Coach Tomlin has showed a willingness to "ride’em ‘til the wheels fall off" in regards to his running backs. Behind Mendenhall the Steelers have Isaac "Red zone’ Redman, Jonathan Dwyer, and Mewelde Moore. I know many of you reading this are big fans of Redman. He’s a great underdog story after going undrafted and working so hard that he finally made onto the Steelers regular season roster. He was also the hero of the Steelers second game against the Ravens last season when he willed himself into the end zone to pull ahead of the Ravens at the end of the game.

While I am a fan of his personally I’m also realistic enough to see that the Steelers could use an upgrade there. I know many people are still holding out hope that Dwyer will wake up and make some strides in his career but so far he’s been a big disappointment. He can’t even crack the game day roster unless there’s an injury. Moore has been a steady, dependable cog in the Steelers offense the last few years with the exception of last year. He’s now a 29 year old free agent and his skills are clearly on the decline. I’ve even suggested in the latest addition of my 7-round mock draft that the Steelers should spend a mid-to-late round pick on his replacement. 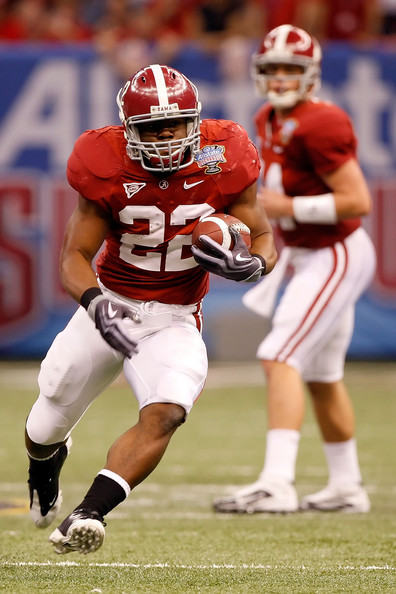 So who would the Steelers take if they were interested in a running back? The 2011 draft class is considered a weak one. The top-rated RB is Alabama’s Mark Ingram. He’s being compared to Emmitt Smith because of his style of play and general lack of top end speed. Most draft sites have him going to the Miami Dolphins at pick 15 due to the fact that both Ronnie Brown and Ricky Williams are free agents. However there is growing concern about possible arthritis in his knee that has him potentially falling to the end of the first round and he may be in fact available at 31 when all is said and done. Knee problems, and really any issues concerning the legs, are a serious concern when it comes to running backs.

However if his knees does check out any team with a need at the position would be foolish to bypass him. While he’ll certainly not win any foot races with his 4.58 speed he has the moves to become a special player in the right system. For the most part Ingram is considered the only running back with a first round grade.

However another running back has been gaining some steam as the draft process has rolled along and that is Illinois’ Mikel Leshoure. Despite weighing in 17 pounds heavier (232lbs.) than Alabama’s Mark Ingram he still runs a faster 40 time (4.56 at the combine). He’s drawn a lot of comparisons to Rashard Mendenhall but that comparison isn’t quite accurate.

Yes they both attended Illinois but Mendenhall is much more of a dancer. He likes to spin and is much more of a finesse player while Leshoure is more of a bruiser. He’s more likely to lower his shoulder and drive a defender back but is still light enough on his feet to bounce to the outside and accelerate into open space, so I guess in that regard he is somewhat like Mendenhall. Leshoure is also effective in the passing game as well which is what the Steelers really need on third downs to replace Mewelde Moore. 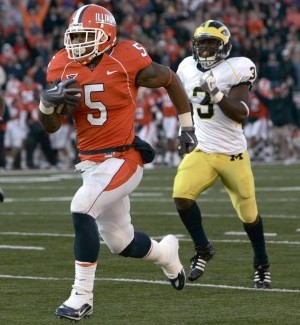 So I know that on the list of needs that the Steelers have running back would be about 8th from the top but wouldn’t you rather have someone who can come in and split carries right away, prolonging Mendenhall career in the process, instead of the fourth best cornerback who’ll probably have to sit for a year to learn the system and may never be anything more than a Nickel CB at best anyway? I’m not saying it would be my first choice for the Steelers to draft a RB but it’s certainly an option that should be on the table as a last resort instead of reaching for a player at a more needed position just because some people like to jump the gun on the panic button.