Following up on my article on "What if the Steelers drafted a running back in the first round" I thought I would take the time to write a profile on Illinois’ Mikel Leshoure. There are some teams who have him as the top rated running back on their draft boards, higher than Alabama’s Mark Ingram even. Leshoure is a tough, physical runner with the potential to be a three down back at the pro level. I know running back is certainly not going to be a popular choice amongst Steelers fans, but it may be a viable option if the draft doesn’t shake out in the team's favor by the end of the first round.

As previously mentioned Leshoure is a very though, physical running back. He has the power to consistently stiff-arm and run over would be tacklers but also the agility and quickness to bounce to the outside. While he doesn’t have elite speed he does possess good game speed and is quick to get to his second gear. His thick build will make him a great asset in short yardage and goal line situations. Leshoure also has great ball security. In the passing game he is a willing blocker and catcher with good hands. Regardless of what aspect of the game he always gives maximum effort. 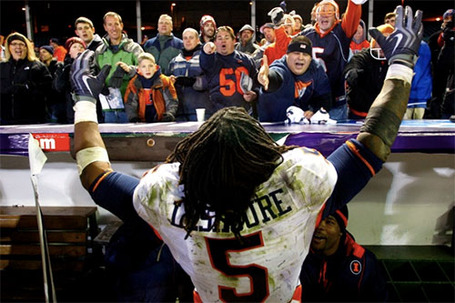 Cons: The first things that will come up are the character concerns. In 2007 he got into a fight with a teammate and subsequently had his jaw broken. The following year he was suspended one game for violating team rules. It seems though that he has matured since then as he seems to have impressed several teams during interviews at the combine. Sometimes he has a tendency to run high, opening himself up to potentially bad hits. He also needs some work on his route running as he has a tendency to round off his routes. As far as blocking goes he is very willing but needs work on his technique. That shouldn’t be too big of an issue though with a little bit of coaching. Also Leshoure has a pretty small body of work to analyze has he was only a full time starter for his Junior and final year in college, but one could look at that as a positive in that he doesn’t have a lot of wear and tear.

Draft Stock: Currently Leshoure is a fringe-first round pick but has been gaining enough steam during the draft process that he could come off of the board anywhere in the 20’s. Because of the knee issues of Alabama’s Mark Ingram Leshoure could potentially see himself be the first Runningback to come off of the board. A dream scenario for Leshoure would be for the Bears to draft him at pick 29. He grew up in Champaign, Illinois and enrolled at the University of Illinois without taking any visits to other colleges. Chicago does have a need for a power RB. New England could take him with picks 28 or 33, Cincy could at pick 35 to replace free agent Cedric Benson, Denver at 36 needs a compliment to Knowshon Moreno, and at 41 Mike Shanahan at Washington loves to utilize a multiple back system. 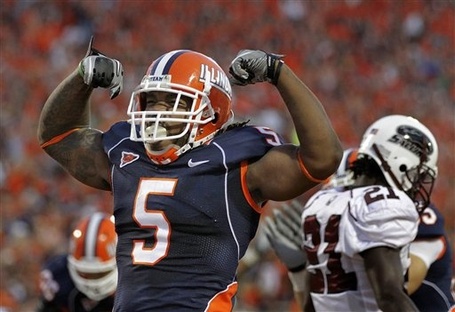 NFL Player Comparison: Pittsburgh Steelers RB Rashard Mendenhall
This comparison has been brought up by many around the web. They both wore number 5 for the Illini and some aspects of their games are similar. While Mendenhall is a little more finesse and Leshoure physical, they both are three-down backs who excel at hitting the corner and getting their second gear in a hurry. 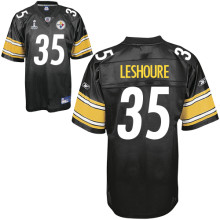 Final Word: As I mentioned in my previous article, drafting Leshoure would be a last resort in the event that the other players the Steelers are targeting in the first round are unavailable. If the Steelers elect not to trade up it’s likely that most of the names linked to the Steelers, Mike Pouncey, Gabe Carimi, Derek Sherrod, Phil Taylor, Cameron Heyward, Muhammed Wilkerson, and even Brandon Harris may be gone. I’ve noted before that since the AFL/NFL merger the Steelers have NEVER traded out of the first round. I know that many people would prefer that the Steelers trade back and acquire more picks but it’s just not the Steelers philosophy to do so. If they stay put the Front Office will assuredly take the best available talent that fits any sort of need, be it an immediate one or one that will arise a couple years from now. Coach Tomlin likes to ride the bus until the wheels fall off in regards to Runningbacks so it makes since to have someone on the roster who can replace Mendenhall for a potentially long stretch if he gets hurt. Selecting Mikel Leshoure would be making the best of a bad situation if his name is called with the 31st pick in the NFL draft.