Excellent work by Steel34D with his pick and writeup at No. 40 for the Dallas Cowboys. His pick is a name we've heard associated with the Steelers on more than one occasion, but most seem to agree that the Steelers would not use the 31st pick on a 27-year old. Next up: the Washington Redskins, represented by Maryland resident John Stephens.  - Michael B. -

The Dallas Cowboys had a surprisingly bad season last year. The Cowboys finished with a regular season record of 5-11 in 2010, just one year removed from getting their first playoff win since 1996.

Defensively they were not able to stop anyone, as all but four of their 2010 opponents were able to put up at least twenty points against them. The decision to hire Rob Ryan this offseason, combined with our hypothetical 1st round pick of Nebraska CB Prince Amukamura, should help fix some of these issues.

More surprisingly though in 2010 was their offense. Despite having what was arguably the most talented backfield in the NFL, the Dallas Cowboys failed to have a 1000 yard rusher. The easy fix to this issue is to strengthen the trenches. That is why with the 40th pick of the 2011 Draft the Dallas Cowboys select...

Danny Watkins is a lunch pail player, who will give everything he has on every down. At 6'3 313lbs Watkins lacks ideal size to continue to play left tackle but matches up favorably to playing guard in the NFL. Watkins is a 26 year old former fire fighter from British Columbia, who has only four years of football under his belt. Despite this Watkins has solid technique, continually keeping a low center of gravity and a wide base. He uses his hand well and has good feet. Watkins may have the highest ceiling of all the prospects because of his lack of experience.

Watkins also plays nasty, continually fighting on a play until the whistle and seemingly loves the physicality of the trenches. The downside is he will be 27 years old we the season starts which mean he will not be a ten year starter and may only make it out of his rookie contract before his body begins to wear.

Where does he fit on the Cowboys Roster?

The Cowboys' biggest struggles were on short yardage plays and in the passing game. When you consider how four of their five current O-linemen are over thirty, it's easy to see the dire need to retool in the trenches sooner rather than later.

Kyle Kosier, their veteran left guard, is a free agent, and the franchise has made no attempts to re-sign him. Marc Colombo, their right tackle, is a shell of his former self, with knee injuries becoming more and more common. Leonard Davis had three straight Pro-Bowl years when coming over from Arizona, but the last two years have seen his performance decline while his financial compensation continues to escalate.

The Cowboys haven't forgotten how Justin Tuck has destroyed their offense, or how Osi Umenyiora had his way with Doug Free. Assuming Kosier doesn't return, Watkins can fill the immediate void and bring the nastiness and fear back into the Dallas Cowboys' run game. A better running game might translate to better protection of Tony Romo, which in turn could keep him on the field more regularly. Dallas would then be able to start utilizing their 1st round pick from last year -- the one already showing poor judgment. (Yeah, you know who I mean.) 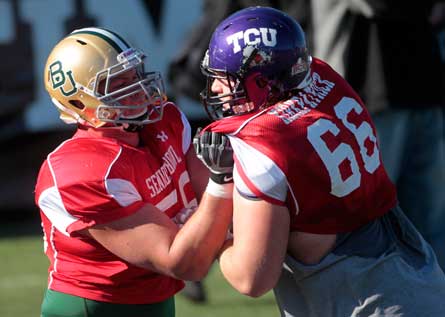 Though Danny Watkins is considerably older than most rookies, his age gives him a rare maturity for incoming prospects. He is a strong character guy who will work on every down until the whistle and plays with nastiness. Combine that with his above average strength and technique you'd be surprise to know that Watkins has only four years of football experience. Watkins best compares to Logan Mankins though not as athletic, and will instantly upgrade the Cowboys running game and help them complete for the NFC title.