With everyone in the draft world having settled on cornerback and offensive line as the Steelers biggest positional needs, everyone seems to have forgotten, or just overlooked, the fact that the Steelers really need to get younger on the defensive line. Brett Keisel (32), Casey Hampton (33), Aaron Smith (34), Chris Hoke (34), and Nick Eason (30) are all on the wrong side of 30 and if the Steelers keep to their drafting philosophy, where as they take a player to fill for a future need, then it shouldn’t surprise anyone to see them take a defensive lineman somewhere in the first three rounds of the draft. So it’s with that in mind that I continue to profile yet another defensive lineman for the 2011 NFL draft, this time I will focus on Clemson defensive tackle Jarvis Jenkins.

Jarvis Jenkins has an excellent bull rush. His ability to keep his pad level low makes him able push back would-be blockers into the back field. He maintains decent hand placement and a violent punch to move opposing linemen to his will. He fires off of the snap and he has sound overall technique. He has four solid years of production at Clemson and is the schools all time leader with four blocked field goals.

Cons: Jenkins doesn’t offer much in the pass-rushing department. While he does possess decent lateral agility for a man of his size he lacks the quickness in pursuit to be a real threat as evidenced by his career sack average of one. He also needs to be more consistent. He has a tendency to disappear at times. While is bull rush move is outstanding it’s also the only move he has so to become a more effective rusher he’ll need to develop some other moves to add to his repertoire. Unless he sheds some weight he’ll be off of the field in obvious passing downs. 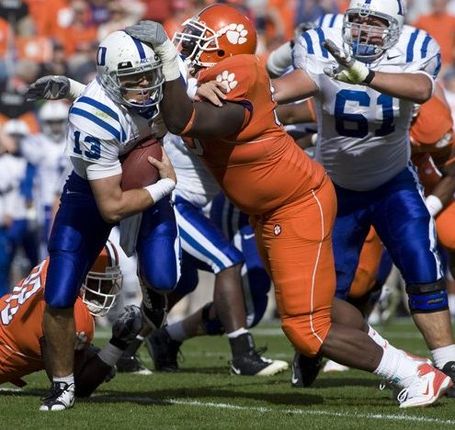 Draft Stock: As of right now Jenkins is slated to go off the board anywhere from the mid-to-late second round at the earliest, to the end of the third round at the latest. His size and skill set make him valuable to any 4-3 teams as a run-stuffing nose tackle, or to a 3-4 team as a defensive end. Some 3-4 teams may even consider him as a nose tackle.

NFL Player Comparison: Baltimore Ravens DE Corey Redding
Both Jenkins and Redding have a similar build and both are solid contributors against the run game but lack the quickness to be effective pass-rushers. 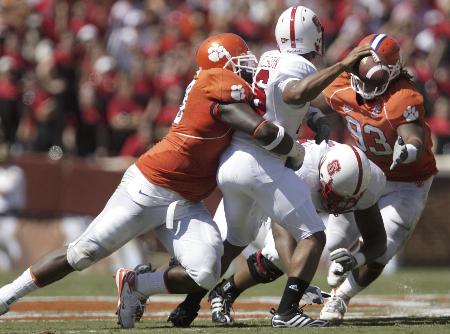 Final Word: It’s likely that Jarvis Jenkins will be drafted somewhere in the third round, but someone could reach for him in the late second. If I were the Steelers I wouldn’t take him at 63 but if he were still on the board at 95 I would have no problems with the front office taking a chance on him. He definitely needs work improving his pass-rush but he’s a very effective run-blocker and given enough time to sit and learn behind the likes of Aaron Smith and Keisel I think he could be a very solid player in on the Steelers defense.