Last week was a very challenging week for yours truly. By Saturday, I knew I had to end it on a fairly good note. With that in mind, I decided to take in my first arena football game.  Pittsburgh's new arena football team, the Pittsburgh Power, was playing a home game against the Jacksonville Sharks at the new Consol Energy Center. I figured it would be a good way to get my football fix AND see the brand-new arena. 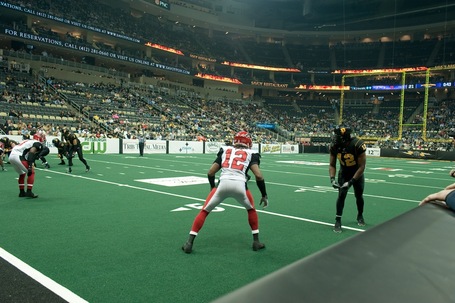 (Photo credit: David Kelly, owner of NewEndProductions...Many  thanks to Kelly for agreeing to let BTSC use one of his photos from Saturday's game. New End Productions on Facebook. - Michael B.- )

Parking wasn't too difficult to come by, but the indoor garage near the arena was charging $15. I thought, "$15? That's what I want to pay for a ticket!" Fortunately, there was a lot about two blocks away from the arena that only charged $5.

When I arrived at the ticket-purchase window, I wondered if there would be any upper general admission seats left. I wanted to see my first arena football game, but I didn't want to spend an arm and a leg just in case I didn't like it. Sure enough, there were plenty of tickets left--including general admission for only $15. Not a bad price to pay to take in a football game.

My ticket read: GENADM GA1 seat 297. That really confused me. When I asked one of the ushers where seat 297 was, she told me it meant that I could sit anywhere in the upper levels except a few sections that were reserved. I wanted to get a seat on the sidelines so I could get the best view. For those of you who don't know, an arena football field is only 50 yards long and the 25 yard line is considered prime seating, even for the upper deck. Lo and behold, it was one of the sections that was reserved.

So I instead found a nice seat all by myself near the 5 yard line. Yes, I did go by myself. I don't mind going to events like that alone. I'll be 39 in a few weeks and don't care about social faux pas as much as I used to.

Sarah Marince, a local country music singer, performed the national anthem and also did the halftime show.  She's actually quite talented. I'm not really into country music, but I can see her becoming a star someday.

Local radio personality, Bubba, is the Power's PA announcer. I found him quite annoying because he had to say something after every play. I know it's his job being the PA guy, but he's Bubba and I can only take so much of that guy. Every time the Power made a first down, he urged the crowd to get on their feet and make some "NOISE!!!!!!!!!!!!!!!!!!!!!!!"  It's arena football. There must be thousands of first downs every game. Was Bubba trying to wear those poor people out? In contrast, every time the Sharks made a great play, he announced it with the kind of enthusiasm often reserved for funerals. It was sort of how Sam Nover used to act when he would interview Steeler players on the "5th Quarter" after a tough loss.

As far as the action, it was fairly entertaining.  But with 8-on-8 action on a 50 yard field, it naturally seemed like an odd brand of football. You add Bubba's over-the-top screaming after every play, and it felt like a cross between a football game and a wrestling show. Or a regular season NBA game. There wasn't much defense to be had. Scoring was so frequent, a touchdown almost seemed like a lay-up. The players celebrated everytime they scored, and I was screaming, "Save your energy. You're going to have to score a few dozen more times before this one is in the books!"

The Powers' defense was pretty much non-existent and the Sharks scored on every possession. There was a point late in the first half when Jacksonville unsuccessfully went for an onside kick. They were up by 14 points at the time, but since Pittsburgh would get the second half kickoff, I'm guessing they figured the Power would score quickly, and Jacksonville would get the ball back with enough time to score again before the half.

Well, Jacksonville's strategy worked even better than they probably thought because Pittsburgh failed to score at all and the Sharks were able to march down and kick a field goal at the end of the half (yes, they do have kickers and field goals in arena football).

I only recognized a couple of names from either team and they both played for Pittsburgh. One of  them was the placekicker, Paul Edinger, formerly of the Chicago Bears. The other was the Pittsburgh Power quarterback, Anthony Morelli from Penn St.

Yes, Anthony Morelli is now playing arena football, but he's not even the starter for the Power. In fact, I don't even think he's second string. He's the third-string quarterback, but because of injuries to the guys ahead of him on the depth chart, Morelli was forced into action on Saturday evening. He didn't look very sharp and was probably the main reason the Power didn't score on every offensive possession.

As a PITT Panthers fan, I held a lot of animosity towards Morelli for his decision to break his verbal commitment to the program and instead sign with Penn St. Well, now, seeing Morelli play, there is no longer a need to hold a grudge.

But I was cheering for him Saturday night since I now consider myself a fan of the Pittsburgh Power. Speaking of that, I was pleasantly surprised by the enthusiasm of the crowd. The arena was only filled to about half its capacity but the people were in the game the entire time even when it became obvious that Pittsburgh was too far down to come back.

I didn't notice any potential NFL talent during the game, but Pittsburgh's fullback, Joshua Rue, was pretty popular with the fans. Every time the Power had a short-yardage situation, the crowd would scream "RUUUUUUUEEEEEEEEEEEEE!!!!!!!" Gotta love Pittsburgh football fans. Even in arena ball where rushing is almost an afterthought, the fullback is still one of the most popular players on the team.

The Power even have cheerleaders--the Sparks--and they were a pretty nice diversion throughout the evening. They not only danced and cheered for the Power, but every so often during a commercial break, they would shoot t-shirts into the crowd. Being in the upper level, I didn't think I would have a shot at having a shirt blasted up in my vicinity. But believe it or not, one did come into my section. I didn't try to go for it because, as I mentioned, there were a couple of young kids in my row. I didn't want to be one of those clowns that got booed for fighting a child for a souvenir.

Speaking of souvenirs, I don't believe fans are allowed to keep footballs that go into the stands. There were a few occasions where a fan wound up with a ball after an extra point or kickoff, but I believe the ball boy went and retrieved it. I can't imagine the AFL having a very big budget and footballs are probably at a premium.

There isn't instant replay in arena football and there was a play late in the game where a Power receiver caught a ball in the corner of the endzone and then fell over the boards. The official jumped over the boards to see if the player still had possession and then signaled "touchdown!" I thought that was hilarious because  who knows what the guy was doing with the ball before the official jumped in to see if he still had possession? He could have been dribbling it on the ground for all anyone knew.

The Power lost the game 65-40 but it was a fun and inexpensive evening. I plan on taking in another game or two before the season is over.