Many thanks to Tim for this profile. Whoever gets Acho in this year's Draft is going to be quite pleased. He's got one heck of a motor, and he's arguably the highest character guy out there. -Michael B. -

A four-year player, two-year starter who worked behind players like Brian Orakpo and Sergio Kindle at defensive end. He took over a starting spot following the departure of Orakpo to the NFL, and played multiple positions on UT's 4-3 defensive line. He won the William V. Campbell Trophy which is given to the most phenomenal student-football player in the nation, an award that is symbolic of both his character and his devotion to life outside football. 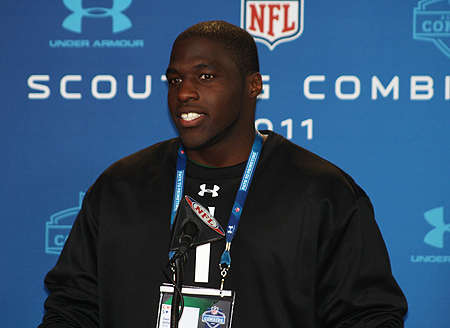 Both his parents are natives to Nigeria where he, his father, and his brother (also a longhorn) make yearly medical trips to during the summer. Acho is also said to be an active participant in community service and a member of the Texas' student advisory board. It's more than a safe bet that Acho will never be an problem starter off-the field, and it appears that he'd be an asset in the locker room as well (http://www.texassports.com/sports/m-footbl/mtt/acho_sam00.html).

As a pass-rusher, Acho flashes a lot of upside, as he has a relentless motor and what is regarded as very good technique. It is said his hand placement and leverage are ideal and he uses both to get underneath o-linemens' pads and drive his way back to QB's. His speed is above average and he's said to possess a strong nose for the football when playing against the run. He's a solid tackler and he's very effective in pursuit, chasing down ball carriers on a consistent basis, supported by his 28.5 tackles for loss in his final two seasons at Texas. His 8 sacks in both of those last two seasons also reflect the consistency in getting to the passer.

Against the run, Acho does have some issues. There are concerns about his natural strength. He's not weak but there are questions as to how well he would anchor against the run. Some believe he can be coached up to a respectable level, while others-this is what will scare off most Steeler fans-fear he may really struggle at the next level. His technique may be sound but not perfect, and it remains to be seen if he can drop into coverage as a 3-4 linebacker. Given his 4.68 40 yard dash time it is believed that this shouldn't be a problem, and Acho claims he has been used in coverage while at Texas, and that he'd have no problem playing the 3-4 rush linebacker position. While rushing the passer he may need to develop more moves and counter moves to improve his effectiveness. 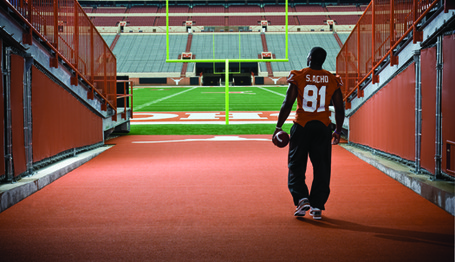 His motor can occasionally work against him as he'll over-run QB's when coming off the edge and ball carriers in the run.

At this time Acho projects as a mid-second to early-third round pick. Questions surrounding which scheme he'd be a better fit for have teams unsure of just how good a prospect he is but there's potential in him for playing in both the 3-4 and 4-3 defenses. The Steelers seeing him fall to 63 is not out of the question but I have to think that a team will take a shot at a talented pass-rusher somewhere in round 2. If Acho were there at the end of the second I think the Steelers will give him serious consideration unless a tackle or guard they really like is still on the board. 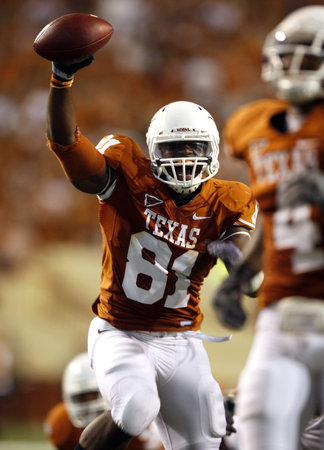 I think worst-case with Acho is that he turns into another Bruce Davis; an adept collegiate pass-rusher who becomes one-dimensional in the pros. I don't think that will happen with Acho. If drafted by the Steelers, there'd be no immediate pressure on him to step into a starting role. Ideally he could learn behind Harrison and Woodley and compete with Worilds for playing time in mop-up roles while developing the rest of his skill set for 2-3 years, or whenever Harrison retires. At that point either he or Worilds would arise as the next starter at the position, both being better players for having to have earned the spot by competing against one another. Acho would also provide insurance for the disaster scenario in which LaMarr Woodley never comes to a long-term deal with the Steelers and leaves via free agency following the next football season.This selection would not mean we're giving up on 2010 second round pick Jason Worilds either, but more adding needed depth and competition at the position, something Mike Tomlin craves. Pitting Worilds and Acho against one another, as hostile as it sounds, would make both of them better players as they would compete for the title of heir-apparent to the next open OLB spot.

If I were to give a player comparison I'd probably have to go with Tamba Hali of the Kansas City Chiefs. Some will think LaMarr Woodley when they see the near identical-measurables between the two (in terms of height and weight) but two of Woodley's strongest assests coming into the NFL were his strength and ability to anchor the run, which are the two biggest areas in need of improvement in Acho's game. Back to Hali and Acho-both were defensive linemen coming out of college, and their respective heights and weights come within an inch and 10 pounds of each other. Both have and had questions about their playing strength, and tendency to over-pursue while both were praised on their pass-rushing and character. Though it took some time-Hali started out as a defensive end for the Chiefs before moving to OLB-Hali has emerged as one of the NFL's premier pass-rushers registering 23.5 sacks in the past two years (the exact same number Woodley has over the same stretch). While expecting this sack total out of Acho on a yearly basis is a bit of a lofty goal, I would realistically expect 8-10 sacks on a yearly basis from him in a starting role.

Ultimately, in an atmosphere with great coaches like LeBeau, Keith Butler, and Tomlin, coupled with Acho's great personality and premium work-ethic you could be seeing the next installment of the many great linebackers the Steelers have had over the years.