Expecting the Unexpected: Jonathan Baldwin to the Steelers at 31?

Share All sharing options for: Expecting the Unexpected: Jonathan Baldwin to the Steelers at 31?

April 28th, 2011... Inside the Steelers War Room a a disaster of unfathomable proportions has occurred. What little remains of Kevin Colbert's hair lies in tufts scattered across the draft-room floor as he sits at the head of the Steelers' draft table with his face in his hands. Next to him, out of Mike Tomlin's eye falls a single tear. Art Rooney II is on the phone screaming for Goodell, shouting that "This is an emergency!" Punxy Polamalu lies sprawled out dramatically in the middle of the room's large round table, all spunk and mischief faded from his once lively face.

Across Steeler Nation, things are no better. Those who follow the draft feel like they did after Superbowl XLV all over again. Some have become physically ill, and some have decided to give up on football all together. What is the cause? The New York Jets have just selected Cameron Heyward with the 30th pick in the draft, capping off an improbable run of teams selecting every player that was thought to be a good fit for the Pittsburgh Steelers prior to the NFL Draft. Cameron Heyward, Aaron Williams, Phil Taylor, Mike Pouncey, Muhammad Wilkerson, Gabe Carimi, Derek Sherrod, and Brandon Harris are all gone. Each and every one, taken before they could be whisked away into the football utopia that is Pittsburgh. So what do the Steelers do now?

The odds of a hypothetical scenario like this actually playing out are very, very slim, and of course the fallout would not be nearly as dramatic as I've built it up to be, but this is a very interesting question; What if all those players are gone? What do we do? Obviously the Front Office will either trade down or select whomever their official big board dictates is the Best Player Available, but who would that be? Maybe 27-year old Guard Danny Watkins from Baylor? Stephen Paea the possible NT out of Oregon State? Kyle Rudolph the talented but oft-injured tight end out of Notre Dame? Or could it be Jonathan Baldwin the WR out of the Steelers own backyard, the University of Pittsburgh?

Let's go with that last one. What are the chances the Steelers take a wideout in round 1? I'd be a member of the party thinking that say "not freakin' likely!" The Steelers stable of receivers seems full enough already with "twinkle toes" Hines Ward, the young and blooming star Mike Wallace, "Young Money" aka Antonio Brown and Emmanuel Sanders, Antwaan Randle-El (gonna go ahead and give myself Kudos for spelling that right on the first try), Aranaz Battle, and the always down-on-his-luck Limas Sweed already holding/fighting for roster spots. That's quite a few people fighting for 5/maybe 6 roster spots-and hell, that has to be the most ridiculous set of names in all of football; my spell check had a meltdown trying to tell me how wrong I was when typing that last sentence. Adding Baldwin would be a controversial move to say the least, not just for the lack of major need at the position, but also for the baggage that comes with Baldwin. For those that didn't hear this, he was charged with sexual harassment on a bus where he allegedly grabbed a woman's backside a couple years back. To my understanding the charges were dropped but Baldwin was still disciplined by the school and was suspended for a game or two. It get's worse too. After suffering through an abysmal season at Pitt this past year, Baldwin texted the following to Chris Steuber of NFLDraftScout.com when asked upon his status for next year:

"Heck yeah I'm leaving. It can only get worse. They had me running a lot of deep routes [this year] and yards were hard to come by. I barely ran intermediate routes; it felt like they were purposely trying to disrupt my draft stock."

Baldwin would later retract the statement and apologize with the following, but still declared for the draft:

"Yesterday, I received a text message from a reporter at a time when I was very emotional," Baldwin said in the statement. "Because of everything that happened, I wasn't using the best judgment and am very sorry about the things that were printed. I love my teammates and coaches at Pitt. I have not made a final decision on the NFL Draft. My only focus is on my commitment to my team and preparing to win our bowl game next month."

So why the hell would Colbert even consider drafting this guy you may ask? Well your guess is as good as mine; remember when I said that just because I post something in this series of "Expecting the Unexpected" doesn't necessarily mean I want it to happen. So you understand that I was surprised upon hearing Colbert glow over Baldwin's work ethic and talent. Of course seeing as how Baldwin shares both a city and Heinz Field with the Steelers, they may have the upper-hand and know things that most scouts and draft-niks don't. It could all just be a smoke screen. It might just be that Mr. Colbert has a weakness (maybe his only one) or a soft spot for troubled, yet talented, young receivers. Case and point Plaxico Burress and Santonio Holmes. Both were really good receivers, had some major contributions to the organization, but ended up getting shipped out or let go due to their troubling me-first attitudes/off-the-field transgressions. The idea of drafting Baldwin is further reinforced by the Post-Gazette's Gerry Dulac's statement on NFL Network's Path to the Draft in which he stated that the Steelers "never turn their back on a skill position player." From a talent standpoint, I think Baldwin would be a bargain that low in the first round. He's fast, has overpowering size, a real strong vertical, good hands, and a toughness and dangerousness about him after the catch. He'd finally give us that "big receiver" Ben has been clamoring for, and could be a great red-zone target from day 1. I think with whatever team he ends up on he'll be able to contribute in a big way in terms of skill, but he may become one of those locker-room cancers. Mike Mayock backed this up when he was asked about Baldwin in a chat on NFL.com:

Hi Mike. What are your thoughts regarding WR. Jon Baldwin from Pitt? Where do you rank him among the receivers and where do you think he will be taken?

Hey Lucas, Baldwin is one of the bigger questions in this year's draft. He has a well-earned reputation as a diva. And publicly trashed his starting QB at Pitt. From a talent perspective, he's a physical freak. He could be the third WR off the board, or he could be the fourth or fifth WR off the board. I think he will go early in the second round. He's very raw from a route running perspective. But will make plays in the red zone and outside the numbers because of his rare physical traits.

I think Mayock's response says it all. The kid has undeniable talent, but he needs to grow up. I think that may be another reason Colbert would give him any consideration. We've all done and said things we're not proud of when we were young, and you're lying if you deny that. Colbert may think they can change him, and that the positive influences of guys like Hines Ward could create a good atmosphere for Jon to become more of a team player in. I don't want to slant Baldwin before giving him a chance to prove myself and the other critics of his attitude wrong. In fact I hope he does as he's got genuine #1 WR stuff, and it would be a damn shame to see it all go to waste. I'll leave you with some highlights of Baldwin and you can judge for yourself. 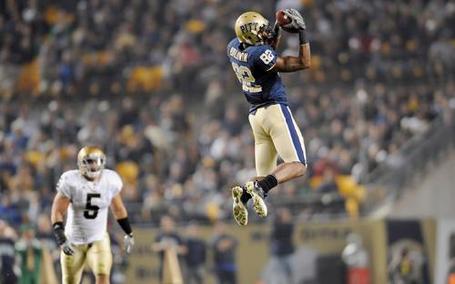