Share All sharing options for: A Tale of Two Teams - the 2010 Pittsburgh Steelers, Game 9

This is the (rather delayed) continuation of my game-by-game analysis of the 2010 Steelers season.  If you have missed the previous eight posts and want to check them out, the links are at the end of the article.

<Groan>  There's no help for it - it's time to look at the infamous game between the New England Patriots and the Pittsburgh Steelers. It's a shame that the group we fielded looked more like our AAA players than the team that had grabbed the #1 spot in the AFC North some weeks earlier. The choice of photo of Ron Gronkowski celebrating a TD is something that we saw a LOT - Gronkowski, a Pittsburgh native, had three touchdowns that night.

This game was especially painful for me because I was in attendance. The ticket was my Christmas present from my husband. Fortunately, both my husband and the Steelers made it up to me with more gratifying gifts in December. But let's get this over with:

The Steelers had just played a three game road series, ending with a Monday Night Football game against the Bengals. (They won 2 out of 3 of the road games - @ Miami and @ Cincinnati, and lost @ New Orleans.) This meant that they came into the game off a short week, after three weeks away from home. Despite this, they were the favorites, by between 3.5 and 4.5. After all, the Steelers were at home, the Patriots were a mostly young team that were considered to be somewhat in a rebuilding phase, and the Patriots had also just laid a huge (34-14) egg in Clevelend against the Colt McCoy-led Browns.

But there were two statistics that should have given pause to the people setting the odds. The first is Tom Brady's win/loss record against the Steelers.  It is probably fair to say that Brady owns the Steelers - he was 5-1 against them, (now 6-1) beginning with the 2001 AFC Championship game.  (It's not just us - Brady is 16-3 against the AFC North.) Brady has an average 100.7 passer rating against the Steelers - the highest of any quarterback in team history that has thrown at least 150 passes.

The second is the Patriot's record after a loss. Since the beginning of the 2003 season, the Patriots had lost a total of 25 games in the regular season. In the week after a loss, they had only lost a second game 3 times, and one of those was a playoff game (the first after the end of the regular season.) That's a pretty stunning statistic. Apparently Bill Belichick doesn't like to lose.  (I picture him in a dank chamber deep in the bowels of the Foxboro practice facilities, "discussing" with offending players the deficiencies in the previous game, but that's pure speculation ; )

Whatever motivational tools the New England staff used, the Patriots came out ready to knock heads and take names. The Steelers appeared to have more pressing business elsewhere. The statistics don't tell the whole sorry story, because the Steelers picked up a bunch of passing yards after all hope was basically gone. The Patriots took the lead after their first series and never relinquished it. The fourth quarter began with the score NE 23, PIT 3, so I suppose we can take comfort in the fact that the final score doesn't look any worse than it does.

As noted in the review of the previous game, it was the last time we saw what was supposed to be the starting O line, and the Game 9 line was the fourth starting configuration of the season.  It featured Jonathan Scott at LT, replacing the IR'd Max Starks. Scott was at this point a fifth year veteran in the NFL.  He was drafted by the Lions with the 151st pick in the 2006 draft.  He was waived in 2008 and picked up by the Bills, and was signed by Pittsburgh in 2010, apparently at the suggestion of Sean Kugler.  During these five years he had accumulated 15 NFL starts. Injured LG Chris Kemoeatu was replaced by Ramon Foster in his 5th NFL start. Trai Essex, for what he was worth, was back at RG.  Mewelde Moore and Isaac Redman both suffered concussions in the Bengals game - both played in this game. Rashard Mendenhall's carries were limited, as he had some sort of shoulder issue (although he never showed up on the injury report.) Heath Miller sat out Wednesday and Thursday practice with fluid on the knee, but played. Jeff Reed also sat out Wednesday's practice with an illness. During the game Emmanuel Sanders was injured, but returned. Hines Ward received an (unflagged) helmet-to-helmet hit during a catch and stayed on the ground for a heart-stopping 5 seconds before trying to get up. It was initially ruled a completion, but Bill Belichick, fount of charity that he is, challenged, and it was overturned. So Hines not only had to leave the game with a suspected concussion but ended his streak of 186 consecutive games with a catch, which began in November of 1998(!) and was the third longest such streak in NFL history.
On the defensive side, Aaron Smith was out (for the rest of the season, as it happened,) and Brett Keisel was still out with the hamstring injury - they were replaced by Ziggy Hood and Nick Eason. Will Allen also sustained a concussion in the Bengals game, and didn't play. James Harrison had sat out practice on Friday with "back spasms," but was in the game on Sunday and was said to be "fine." During the game Lawrence Timmons left with a hip injury, Arnaz Battle left with a shoulder injury, and Crezdon Butler had a quad strain.

Team Jeckyll Play of the Week:
It seems as if it would be pretty hard to find a good play this week, but after all the Steelers did get 3 TDs.  But before we look at any particular play, let's look at some numbers.  Literally. 1.7; 2.8; 2.9; 1.6; 2.4; 2.3; 2.3; 3.0.  Compare that list to this one: 1.2; 2.2; 1.8; 1.1; 2.2; 1.6; 1.1; 1.1.  If you were to venture a guess as to which list detailed the number of seconds between the snap and the pass for Tom Brady's first 8 passes and which list was Ben Roethlisberger's first 8 passes, which one would you guess? Well, you would likely be wrong, because list #2 is Ben, according to my times with a stopwatch.  I think this explains a great deal about this game. I timed both QBs' passes for all of the first quarter and a good bit of the second quarter before I ran out of patience, and the only pass plays in which Ben held the ball for more than a fraction over 2 seconds he was sacked. We expect Brady to get the ball out in good time, and he did, but even in cases where he held the ball for over 4 seconds he wasn't sacked.  Ben, on the other hand, spent the game dancing with whichever of the NE defensive players made it through the line on any given play.  It's not terribly surprising that the offense never seemed to settle into a good rhythm. But here are a few plays we can enjoy:
It is 9:08 in the 2nd quarter. A couple of short Mendenhall runs have made it 3rd and 6, and Ben scrambles for 12 yards to the left of a stellar Maurkice Pouncey block. Another short Mendenhall run picks up a yard for 2nd and 9, and here's the lineup for the next snap. That's Mendenhall in the backfield again: 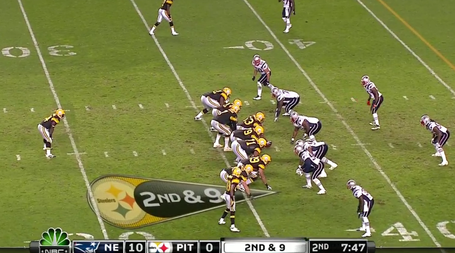 The next thing we see is Mendenhall skipping past a NE defender who has just been hulkerated by none other than #88, Emmanuel Sanders. (Perhaps that should be Hineserated.) Mendy is just crossing the "9" of "2nd and 9." You can also see Matt Spaeth with great contain on the edge in front of Mendenhall: 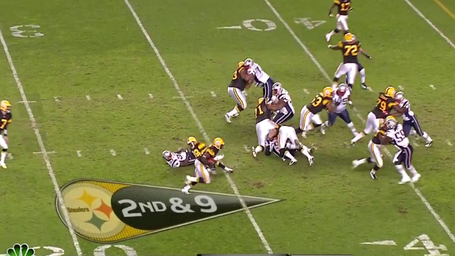 A couple of quick changes of direction to avoid a road block, and all that remains is to at least temporarily outrun Devin McCourty: 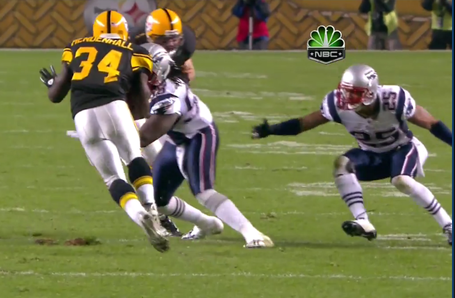 And just like that, he picks up 34 yards.  A nice touch was Ryan Clark jumping up on the sidelines to make sure that McCourty and the other DB didn't take their tackling to the next level, as it were. The next snap is vintage Roethlisberger.  The snap is on the NE 29 yard line, with Redman in the backfield, and Ben fakes the handoff. However, at least one member of the defense isn't fooled, and comes after Ben, grabbing him by the left arm: 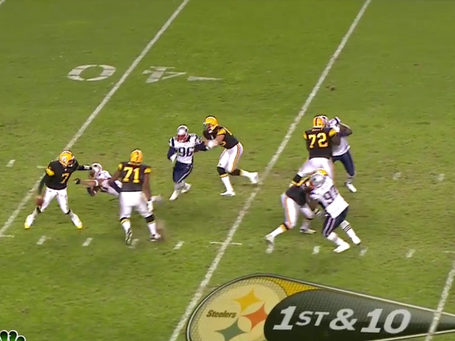 Ben shrugs him off and throws on the run as yet another Patriot comes after him: 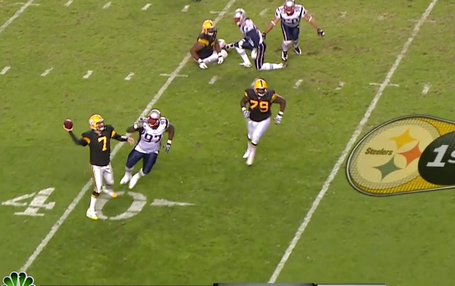 and Heath catches it on the NE 11.  The announcers gave the rather astonishing statistic that Ben's career passer rating when throwing from outside the pocket is 137.8.
Unfortunately, that's all the awesomeness the Steelers offense can muster in this series. It ends with 3 incompletions, and Jeff Reed is brought out for a field goal attempt, which he fortunately makes, giving the Steelers their first score of the night.
The rest of the game was not devoid of good plays, of course - it's just that they were few and far between.  But before we move on to Team Hyde, I want to share one more picture: 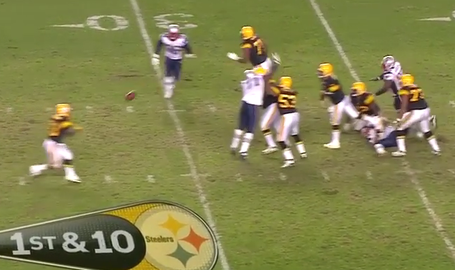