A Tale of Two Receivers - Hines Ward and Chad Ochocinco on Dancing With the Stars, Week 6

Share All sharing options for: A Tale of Two Receivers - Hines Ward and Chad Ochocinco on Dancing With the Stars, Week 6

At the end of last week I put up an article comparing Hines Ward and Chad Ochocinco on Dancing With the Stars. The article only compared them through Week 5, naturally. So here is the update comparing their performances in Week 6 of this season (Hines) and Season 10 (Chad.) If you wish to check out the original article, click here. In that article you can find out more about how the show works, who the judges are, and so on, in case "Dancing With the Stars" isn't your thing. I also give my opinion on Chad and Hines as potential dancers and a very superficial assessment of them based on their past and what we've seen in the show.

Last night was "Guilty Pleasures" night, and each couple danced to a song that the celebrity is a bit ashamed to admit that they like.  (I think that was the point, anyhow.) Hines danced a Viennese Waltz to "End of the Road" by Boyz II Men, which he admitted that he likes to belt out in the shower. (He also said that he thinks of the water as his fans - not sure where that's going : )

In week 6 of Season 10 Chad and partner Cheryl Burke danced an Argentine Tango to "Mas de los Mismo" by Tanghetto.  Let's see how they did: 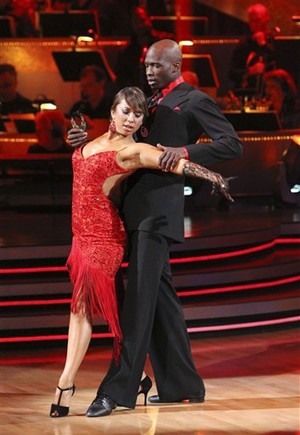 The previous week Chad had danced a Quickstep, and he didn't get much love from the judges.  Comments like "Your hold was terrible and your frame was terrible" had him saying later "The judges are extremely hard on me - I'm not sure why that is." He returned to Cincinnati for the Bengals' draft party, and to, as he said, "refocus and re-energize." He got lots of love from the fans, and that seems to have stiffened his resolve, because he worked very hard in rehearsal.

It helped that he had a dance that he could relate to - he said "The Argentine Tango is all about chest and hips pressed together. I have a feeling I'm going to like that." Cheryl Burke, his partner, said "In the Argentine Tango the man needs to be in control, and Chad needs to focus on that." She said to him in rehearsal "I really want you to lead this dance...not fake it like we've been doing."

Bruno: "The revenge of Ochocinco! Strong, powerful, demented... I was hard on you because I knew you had it, and tonight you proved you can actually dance!"

Carrie Ann: "Let me just clarify - we were hard on you because you weren't dancing that well. But tonight, you nailed it. That was really amazing. It was dramatic, it was powerful, it was arrogant, it was sensual, the lines were gorgeous, really nice job."

Len: "On Dancing With the Stars you either grow or you go. You grew tonight." 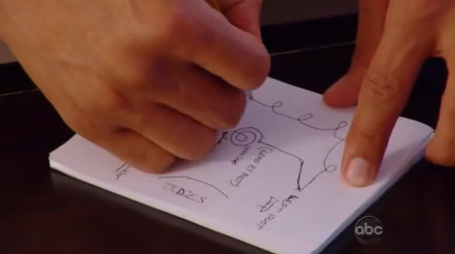 The picture above shows Hines diagramming his "plays" -

"I'm putting in some extra hours at home. I kind of relate what I go through in football to this dance competition. I'm writing the plays down on paper, and I'm replacing Kym with a pillow. I can kiss her - (kisses pillow and laughs.) When I do my dance in my apartment it gives me a comfort level to better understand the routine, so the next day when I go to rehearsal I can add personality into my dance routine.  Being at the top of the leaderboard definitely raised the bar for me to really elevate my game, because we go as far as I go." 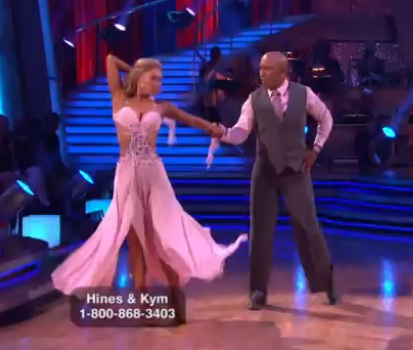 Len: "I tell you what, Hines, you're becoming the MVP - the "Most Valued Partner," because every dance you do is just great. It's got such great musicality, it's lyrical. You're flat-footed, unfortunately, which gets on your wick a bit. [I have no idea what that means, and I was afraid to look it up.  I'm hoping it's a cricket term, Len being British and all.] You've got to get your feet working a bit more. But as a performance and a dance, you're second to none."

Bruno: "As a performance it is pure pleasure from start to finish. And the chemistry you have with Kym really is flawless - you're made for each other, [he goes off into rhapsodic and semi-coherent imagery.] You couldn't be more fluid - you look like you're taking off - we don't know where you're going but we want to go with you."

Carrie Ann: "Once again an excellent performance. But I did see something - something strange was happening in the beginning - it sort of felt like you were thinking too much. I saw this look in your eye that I've never ever seen since day 1... it looked like you were thinking about the dance as opposed to just letting it flow through your body. It's a tiny correction [looking at the other judges, who were protesting] yes, because I usually get drawn in... [Len - "You saw him thinking?"] Yes, and I think for this kind of dance we don't want to see thinking! [Len buries his head in his hands, and Bruno says "Hines and Kym, don't worry!"]

Before they got their scores, the MC said "Hines, I have to ask you this - every week you're smiling, you're always sweet, but I keep hearing about this 'silent assassin.' When are we going to see him?"  Hines answered "I'm just trying to, you know, lay under the radar, and hopefully we find our way into the finals."

Since I'm only covering one week now, I can throw in some other information comparing Hines and Chad.  Again, I don't know that it is completely fair to compare scores between seasons, and their place in the lineup depends to some extent on the strength of the competition.  With that proviso, here are where they placed each week. (The place is given as out of the remaining number of couples, hence 9/11 means 9th place out of 11 couples.) After the first week, the first set of numbers is the rank for that night's score, the second set of numbers is their cumulative rank. There were a number of times where several couples received the same score, and to make it simple I assumed that they were at the top of the set (so if they were tied with three people for third place, I just gave them 3rd.)

As I looked at the scores from both seasons, it does seem as if the competition at the top was a bit tougher in Season 10. One of the contestants, Nicole Scherzinger, scored two 9s on her first dance, something that rarely happens.  The fact that she's a member of the Pussycat Dolls, a girl group/dance ensemble means that she surely had an advantage.  I don't think that any of this season's celebrities had any significant dance experience, and that seems only fair to me. One of the other celebrities was Evan Lysacek, an Olympic Gold Medal figure skater. So part of Chad's lower rankings can be attributed to the level of a couple of the competitors.  But a lot of it can be attributed to the fact that he didn't really get serious about it until this week.  Hines has been dead serious all along, and we're all excited to see how far his work ethic and determination can take him.  Several of the other celebrities are very good, and so things are heating up.

Before I sign off, here are a few more fun things:

The other celebrities have definitely decided that Hines is the guy to beat, although they all claim (and it looks to be true as well) that in fact they are supportive of one another.  Romeo said "Move over Hines, there's a new MVP" before he danced, and in fact he and his partner were awarded the first 10 of the season.  Another 10 was awarded this week, to Chelsea Kane, whose partner sprained his ankle in rehearsal that morning but gamely taped it up and danced. (Dancers are probably some of the few people on earth who can really understand what someone like Hines or Chad goes through to play.)

Hines and Kym were interviewed before the show.  Not much of note was said, other than Hines said that he's had to drill a new hole in his belt, as he's lost some weight.  Also before the show was something that I thought was surely a spoof - an advertisement for a squashy white bread call "Bimbo Bread." Has anybody ever heard of this stuff?

And finally, here's a treat for you.  Each week on the results show the judges ask for one of the couples to repeat their dance from the previous night.  Hines and Kym were asked to repeat their Samba during Week 3.  The picture below is the end of the dance, and yes, that's a Terrible Towel in Hines' hand: 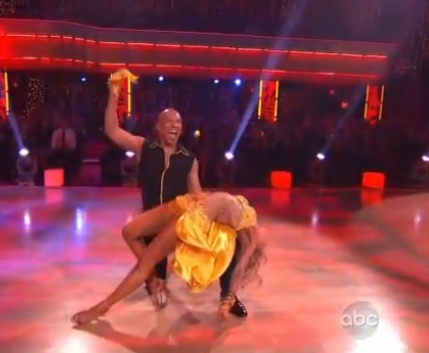 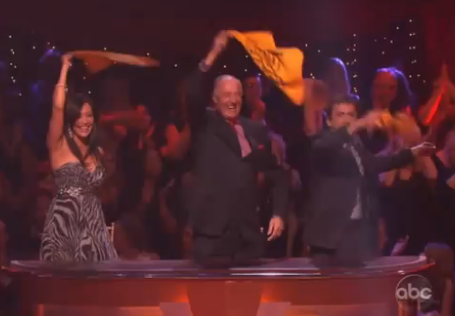