I was a huge fan of Cameron Heyward last year, and really wanted him to declared for last year's draft so that the Pittsburgh Steelers could pick him in the middle of the first round. Heyward decided to stay his senior year at Ohio State, and the overall perception in his skill set slipped a bit as he didn't quite live up to expectations. His name also gets a little lost in one of the most talented defensive line classes ever. He still grades out to be a late-first, early second round pick and may just be the best fit for the Steelers in terms of scheme, character, and background.

Son of Pittsburgh Panther superstar running back, Craig "Ironhead" Heyward, so he's got good football bloodlines. He had this to say about his father who died in 2006:

"I don't want to live in his shadow. He was a great player and he's always in my heart," Cameron Heyward said. "I appreciate everything he's done. But I want to do everything by my own. I'm not asking anybody to give me a second look or anything just because my dad was 'Ironhead'. They all know I have a big head just like him."

Strong character guy with leadership qualities, as he was named team captain this past season for the Buckeyes. Has a quite confidence about him, and gives good effort, possessing a strong work ethic and competitive drive.

Heyward has prototypical size for the 5-technique position. His frame reminds me a lot of Aaron Smith's, as they are nearly identical in size. Heyward is durable starting in 45 games with the Buckeyes, and didn't miss significant time with injury. It is important to note that he had Tommy-John surgery this offseason following an injury in the 2011 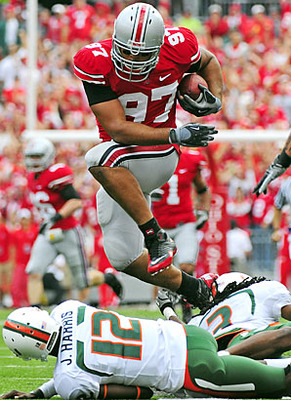 Sugar Bowl. This surgery is not nearly as devastating as it is in baseball but he was unable to fully participate at the Combine. He's naturally a strong player who excels against the run. His motor is regarded as solid, and he was a constant disruptive force for the Buckeyes over the past couple of years. Though he's not regarded as very fast he's got decent athleticism, and can occasionally run plays down. He'll have little trouble anchoring against the run at the NFL level according to the everything I've read about him, and it's also been reported that he can take on and beat double teams. Ohio State will occasionally line up in the 3-4 so he has some experience at the 5-technique position already. Said to be a very solid tackler.

On the negative side of things, there have been a lot of questions about Heyward's lack of consistency his senior year. There was a drop off in sack production and he did not live up to his expectations. Technique is said to need some improving and some say he has to play more aggressively at times. More effective as a pass-rusher from the 4-3 spot. I've read several scouting reports and they've consistently said that one of his biggest struggles is changing direction. This is understandable considering how large he is. I'm not sure that that's a major problem for a 5-technique, but it could pose a problem when he tries to make tackles in open space. He disappeared in some games this past season.

Looks to be a late first lock. The four most-interested teams in Heyward could very well be the Patriots, Jets, the Steelers, and the Packers-the 28th, 30th, 31st, and the 32nd picks respectively. The Jets primary 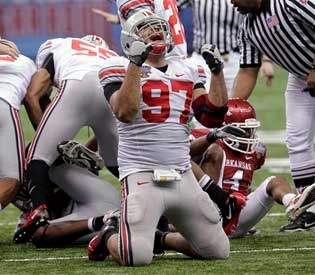 need is a pass-rusher as they have no one who can consistently register double-digit sacks on their roster, so they may move up to get one. They may screw us and pull a swap with the Packers if they feel a pass-rusher will fall to them at 32, meaning the Packers, who badly need some run-stoppers on their d-line, who jump a pick ahead of us to take him. The Pats are in the same boat as the Jets in terms of needing a pass-rusher badly, but with two first round picks (the other being 17th overall) they may chose to address their other biggest need which comes in the form of youth on the d-line with one of the two selections. Heyward may be gone before 28 if there is a run on defensive ends in the teens and lower-twenties. There's a good chance that Heyward is there at 31 with this class being well-stocked in both DE's and pass rushing OLB's. The Steelers have certainly shown interest as both Mike Tomlin and Dick LeBeau attended his pro-day last month, in which he impressed and looked in shape. 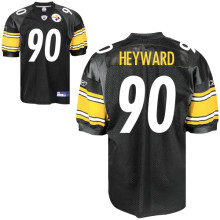 While it won't be considered a "sexy" pick, Heyward, much like Ziggy Hood in 2009, would provide much needed youth at the DE position with both Aaron Smith and Brett Keisel aging. Smith's missed significant time in the 3 of the past 4 seasons, and while Ziggy Hood did a fine job filling in for Smith last year, there were times where both Smith and Keisel were out with injury. Because he's had some experience at the 3-4 DE position, I think that he'd be able to contribute a little faster than Hood did, or perhaps make the transition a little more smoothly.

As far as a player comparison, I want to say a poor man's Aaron Smith. The size and strength between the two are both very similar, and both are made to defend the run. While I doubt Heyward will ever reach the level Aaron Smith has-let's not forget Smith is also a pretty skilled pass-rusher, I could easily see him working out with guys like Smith, D-Line Coach John Mitchell, and Dick LeBeau mentoring him.

While I would prefer to address a need such as corner or offensive line before defensive line, I think Heyward would be well worth a first round pick if no other player fell to 31 that could fit those positions.