Many thanks to maryrose for this fine writeup. As it turns out, datruth4life and some of the rest of you were correct in identifying Carpenter as a guy that was rocketing up draft boards and worthy of a good, hard look by the Steelers in either round one or two. Well, turns out Carpenter went off the board even earlier than we expected, taken at No. 25 by the Seattle Seahawks. Nevertheless, let's take a look at the writeup by 'rose and see what he has to say about the kid and the Steelers' potential thoughts in round two. Keep in mind this was penned prior to Thursday night's developments. - Michael B. -

Some believe you should build a football team from the inside out.  After securing its core last year with Maurkice Pouncey, the next logical move for Pittsburgh is to get high quality dance partners lining up next to him.  Enter James Carpenter, who by the way was picked by Todd McShay to go number one in the second round.  He brings two elite qualities to the table. First, his blend of height, weight and speed is right up there with the top linemen in the draft.  Dude is 6-5, 324 pounds and brings a surprising amount of speed for a guy his size.  Second, Carpenter is tough as nails with a mean streak, an element not lost on the Kuglinator himself.  He plays through nagging injuries and started all 27 games during his Alabama career. 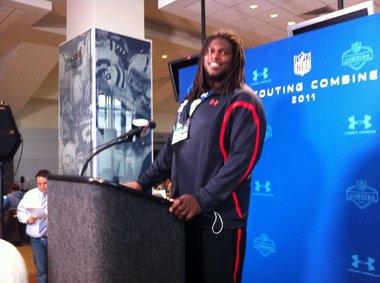 Carpenter also brings unique talent to both run block and pass block with relatively equal effectiveness, both above the line, though neither spectacular at this point in his development.  The better news is that Carpenter is a young guy on the rise.  His place on everyone's draft boards has gone up from the end of the season.  He now carries an impressive 85 NFL Scouts grade, and he won Alabama's Bart Starr Award as the Tide's most improved player.

Carpenter is an upside kind-of-guy that will only continue onward and upward under the tutelage of Sean Kugler.  He is unquestionably one of the most versatile linemen in the draft, having been listed at various sites as a guard and tackle.  Carpenter is a rich man's Trai Essex, interestingly around the same height and weight.  The Steelers would probably use him at guard, but could move him outside in a pinch if needed.  Pittsburgh loves that type of versatility, especially on the offensive line. 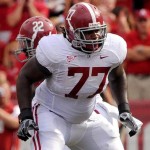 Carpenter was All-SEC for both of his years at Alabama starting at left tackle.  He came from Coffeyville Community College after struggling academically at Iowa State.  Fortunately for Carpenter and the Steelers, he no longer needs to worry about biology and Russian Literature.  Carpenter was a pivotal part of the offensive success the Tide had during the past two seasons and, obviously, has played in some very big games on the big stage.  An impressive athlete, Carpenter has excellent technique and uses his strong hands, knees and feet well.  He can anchor, seal, trap and pull and is not shy about getting to the second level.  He is well schooled for an NFL-style offense, though at times rough around the edges. 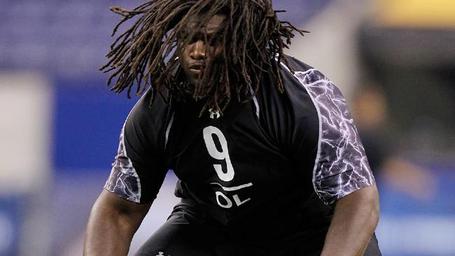 On the downside, Carpenter is not quick enough to play left tackle, but can play right tackle and either of the guard spots.  His stiff hips match the lack of foot-quickness, resulting in trouble changing directions.  His extra-long legs don't help in that regard.  He's really better suited to play guard, playing better in small spaces, and would be effective at pass blocking from an interior position.  He also needs to make up for the two years lost at Coffeyville, where big-time football instincts do not get developed.  This is both bad news and good.  The bad news is that Carpenter would be more refined and polished now had he been at Alabama all four or five years.  The good news is that by flying a little under the radar right now, better days are surely ahead.  The Pittsburgh Steelers invited Carpenter into town for a visit recently.  He'll come back to town this Tuesday wearing a black and gold cap.