CB Curtis Brown: Why Steelers Fans Should Be Excited

Share All sharing options for: CB Curtis Brown: Why Steelers Fans Should Be Excited

Howdy, fellow Steelers diehards. My name is Peter Bean, and I am, in no particular order: (1) a diehard Pittsburgh Steelers fan, (2) the older brother of our fearless leader here at BTSC, and (3) a Texas Longhorns diehard. If you love college football and follow the Longhorns, you may know of my sister SB Nation site, Burnt Orange Nation.

In other words: I might be the most qualified individual in the universe to write on a Steelers blog about a draft pick who played his college ball at the University of Texas. Mike asked me to say a few words on Curtis Brown, Pittsburgh's third-round draft pick, and I'm more than happy to oblige.

To begin with, let's start with what my brother notes as "the one knock on Brown: his diminutive size."  I don't necessarily take issue with Michael's characterization of Brown's size, generally speaking, but the follow-up question I'd insist needs to be asked is: "Relative to what?"

The second thing that needs to be said about Curtis Brown -- and Mike nailed this in his overview -- is that Brown has been a work-in-progress at defensive back. Brown was an insanely gifted athlete in high school who played wide receiver, receiving a five-star rating from recruiting services on his otherworldly athletic gifts alone. No, he wasn't going to play wideout going forward, but yes, he was so jawdroppingly gifted athletically that there was no question that he was a five-star recruit.  I remember well when he arrived on campus in Austin and I first saw this picture of Curtis in summer workouts:

Curtis is the one in white, obviously. The one flying through the air like there's no gravity.

Of course, forget how he looked as an 18 year-old.  How about a shot of Curtis Brown at the NFL Combine? 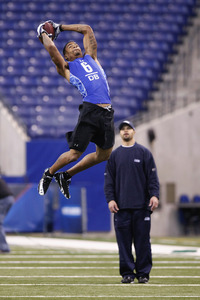 What have we established so far? First, Curtis Brown is not too small to play cornerback in the National Football League. Second, as of Friday evening the most athletic player on the Steelers roster might just be Curtis Brown. Seriously, I'd love to see Brown and Mike Wallace go at it in a jock-athalon, just to see what those two could push each other to do athletically.

Back to the topic at hand, the issue with Curtis Brown is not whether he's big enough or whether he's athletic enough -- he passes both perfectly well -- but whether he can be an NFL-caliber cover corner.  Obviously, Brown wouldn't have been a third-round draft pick if that question was definitively settled, so I won't call out anyone who wants to argue that he won't/can't.  But if the question is whether Curtis Brown was a good third round draft pick for the Steelers, there's a lot less room for debate.  Curtis Brown has all the physical tools to develop into a quality starter, and maybe even a great one.

To be fair, in returning to the six corners who made the 2011 Pro Bowl, it's worth noting that all five of the six were first-round picks. Which is to say that while Curtis Brown's size may be overblown as an issue, that he was a third-round pick does tell us something meaningful.  What I am suggesting, then, is that the question with Curtis Brown is whether he is going to prove to be a run-of-the-mill third round pick (solid talent, with potential to play and perhaps play at a starter level) or whether he has the potential to be something more than that.

I love this pick for Pittsburgh because I saw with Brown at Texas a player who had a huge learning curve to ascend. He arrived a hyper-raw, wiry athlete as a freshman, and left Austin a legitimately strong corner as a senior, adding physical mass in the process without sacrificing the athleticism. Curtis Brown has good hips, above-average acceleration, and freaky agility.  Watch from 1:43 - 2:14 of this clip from his junior year game against Oklahoma State:

In conclusion, what makes Curtis Brown a highly attractive draft pick are his supreme physical gifts, which are second to none. What makes him a third-round pick is his inexperience and work left to do to be an NFL-caliber cover corner. And what makes him a great selection by Kevin Colbert and Co. is the combination of those two facts. As a first-round selection, the development Brown still has in front of him would make him a questionable reach. But as a third-round selection, the upside he has as an athlete make him a fantastic bet. It's certainly possible he won't pan out, but he's athletic enough and underdeveloped enough that he has the kind of upside you're just not likely to find in a third-round pick.  I'm glad that Kevin Colbert doesn't reach in the first round. But I love how he's eager to look for high upside players in the second and third rounds.  See, Woodley, Lammar (2nd Round).  Wallace, Mike (3rd Round).

Speaking of which, Mike Wallace is an appropriate comp for this pick.  The odds of Curtis Brown being as spectacularly successful as Wallace are not good, but the odds of Wallace panning out as well as he did were far from a sure thing when he was drafted, as well.  Wallace lacked polish, but had freakish athleticism that gave him a special amount of upside.

That's Curtis Brown.  Steelers fans shouldn't expect a polished shutdown corner who's ready to play every down from his rookie season on.  But they should see in his profile the kind of potential that gives Pittsburgh a shot at grabbing a first-round talent before he's been able to put it all together.