2011 NFL Draft Results: Steelers Continue to Strengthen their Defense Selecting Chris Carter In the Fifth Round

Share All sharing options for: 2011 NFL Draft Results: Steelers Continue to Strengthen their Defense Selecting Chris Carter In the Fifth Round

With the 162nd pick in the 2011 NFL draft the Pittsburgh Steelers took Chris Carter from Fresno State. Carter projects to be an outside linebacker in the Pittsburgh's 3-4 defense. Carter was extremely productive last season and won the Western Athletic Conference defensive player of the year award after notching 11 sacks. Carter was a key piece to an improved Bulldog defense after matching the same amount of sacks the entire team recorded a year earlier. Carter also had 16.5 tackles for a loss and ended his collegiate career with 200 tackles and 19.5 sacks. 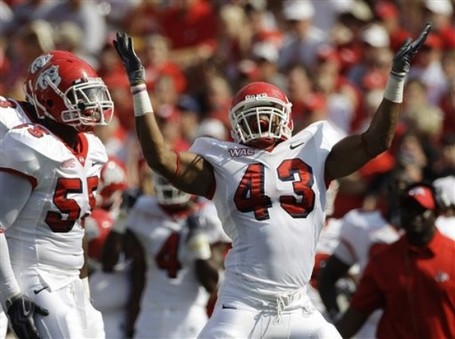 Carter is probably a bit smaller than the Steelers are used to in terms of their outside linebacker position coming in at 6'1, and 248 pounds. Carter is closer to James Harrison (6'0, 242lbs) than Lamarr Woodley (6'2, 265lbs) in terms of size but his strengths have been noted as his intelligence and his non-stop motor. Carter was a player that I have seen in mock drafts as high as the second round to the Houston Texans. Perhaps the second round was a bit high for the Fresno State product, but it appears that Pittsburgh has another solid player that should at least be able to contribute on special teams next year. Welcome to Steeler Nation Chris Carter.