2011 NFL Draft Results: Steelers Grab A Second Offensive Lineman By Selecting Keith Williams From Nebraska In The Sixth Round

Share All sharing options for: 2011 NFL Draft Results: Steelers Grab A Second Offensive Lineman By Selecting Keith Williams From Nebraska In The Sixth Round

At this point Sean Kugler and Carnell Lake must be jumping with joy after both having two new prospects to groom and coach up this season. The Pittsburgh Steelers just selected Keith Williams from Nebraska with their sixth round and 196th overall pick in the 2011 NFL Draft. Williams is a giant clocking in at 6'4, 318 pounds, and he likely projects to play offensive guard at the NFL level. Williams was a three year starter at Nebraska and last season he played left guard where the Cornhuskers rushed for over 200 yards in ten games last season.

Here is a write up from NFL.com:

"Williams' mentality, size and strength should allow him to become a solid backup guard in the league. Pass blocking technique must improve. Needs to get set quicker, deliver a punch and become more active with his hands. However, he does show the ability to hold up even when initially beat. If he can take better angles, and stay low in the running game, could be an area of strength. Despite these deficiencies, he still flashes the ability to blow defenders off the ball and get out in space while pulling. Plays angry and doesn't stop until the whistle. Seven round / rookie free agent." 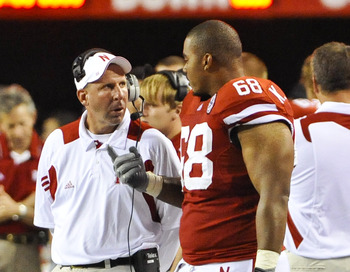 For years Steelers fans have been clamoring that we have been ignoring our needs at the offensive and defensive lines, this year fans will likely be happy with the Steeler grabbing two players on the offensive line, spending their first round pick on the defensive line, and selecting two cornerbacks with tremendous upside to fill the roster's most glaring need. Going into the seventh round this has been one of the least flashy drafts in recent memory, with zero skill position players being taken by Kevin Colbert and company. I guess that's what happens when you hit on 3rd round wide receiver prospects in back to back years and grab another student wide out in round 6 last year. The bitterness of the Super Bowl loss will remain but this draft certainly has the black and gold mentality written all over it.