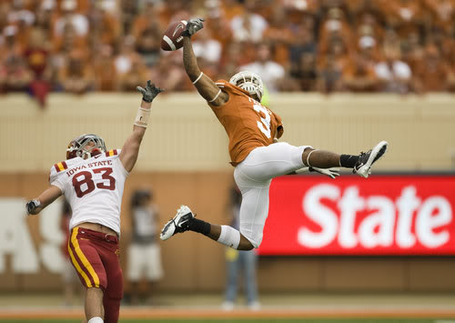 A four-year corner from the University, Brown started 28 games from the end of his sophomore season to the conclusion of his senior campaign. He played in 52 total games in his entire career with the Longhorns. Coming out of High School Brown was a converted wide receiver and corner and one of ESPN's top 150 prospects. Comes from a good football background with his dad playing football for Oklahoma State and his uncle for the University of Houston and then the Colts in the NFL for a few years. Has no known character concerns and is a beneficial guy in the locker room.(info from www.texassports.com) 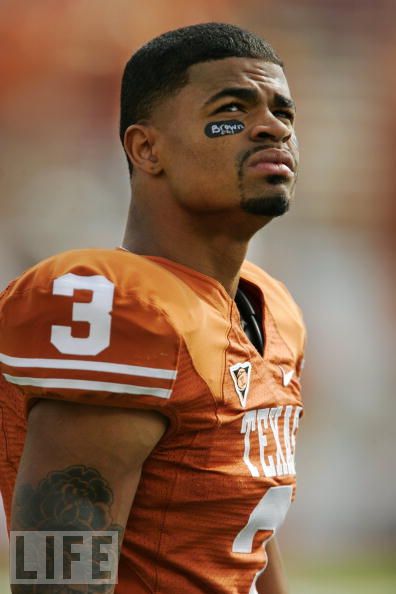 Brown is said to flash good sometimes great coverage instincts. He possesses better than average speed and plays a lot faster than his Combine 4.51 forty-yard dash would indicate. His height is also a positive factor as he measures in at a solid 6'0", and a lean 185 lbs. Brown's 39.5" vertical seems to indicate that he will not struggle matching up with some of the larger targets in the NFL, and he flashed great ball skills at the Combine. Deion Sanders and draft pundits alike agree that he's a very fluid athlete and can change direction very well. As far as zone and man coverage, Brown is solid in both with technical improvements needed in each form. Teams didn't like throwing at Brown this past year at Texas. He also is an asset on special teams, and can play on both return and kickoff/punt teams.

On the downside, I've consistently read that Brown is not a great tackler-not for lack of effort-and may be even below average at this point at trying to tackle in the open.  He does not play the run especially well, and is not a overly physical in any asset of the game. Despite having good hands, Brown had just 2 interceptions at his 4 years at Texas. Part of this can be attributed to a decrease in throws in his direction as he improved, but there is some concern that he lacks play-making instincts. Sadly one of the few things that brought Brown into the national spotlight was the iconic Michael Crabtree game-winning TD vs Texas back in 2008, in which Brown 1. Let Crabtree catch it 2. failed to bring Crabtree down in what became a horrible missed tackle, which 3. Cost #1 Texas the game. Don't worry, he's improved since then.

Brown has consistently been viewed as a second rounder throughout this past season and offseason, and has seemingly, quietly ascended towards the top of the round as he's become more exposed to the NFL's GM's and scouts. The biggest setback for Brown was when he was limited in Texas' Pro Day last week after the flu kept him from participating in most of the drills held-40 yard dash included. Brown is reportedly scheduled to visit the Steelers sometime the near future, so it appears they'll will take an even closer look at him there. 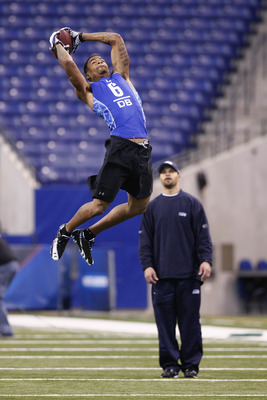 While Brown most likely won't get a lot of consideration in the first, it's not out of this world to think the Steelers could take him at 31 if he blows them away at his private workout. If not, I wouldn't expect him to fall out of the top half of the 2nd round, so a trade up may be required to nab him if we fail to take him in the first.

As a person who relies on scouting reports to feed him most of the information regarding prospects, I'd say Brown is somewhat of an anti- Bryant McFadden. Though fairly identical in size, Brown and McFadden contrast in their respective skill sets pretty strongly. Brown is a solid cover corner who struggles playing the run but possesses high upside while McFadden is a solid run-support/tackling corner, who struggles in pass coverage and is on the decline. In any case, Brown, if drafted, could challenge B-Mac for the #2 corner spot day 1, but most likely would start his career at nickel and transition to an outside DB. 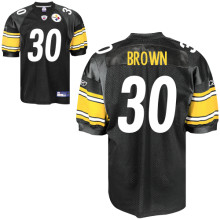