While part of me believes Nate Solder will not be available when the Steelers pick #31, making this piece a tease for Steeler Nation, another part of me knows that in the NFL Draft, surprises happen every year.  Guys fall for a variety of reasons. Al Davis is usually good for a head-scratcher, and the obligatory trade-up-to-get Tebow move occurs (this year Ryan Mallett?).  So here we are at pick #31 and a 6-8, 320-pound beast who is light on his feet is still sitting in the back room of Radio City Music Hall.  C'mon out here, son, and try on this Pittsburgh Steelers ballcap. 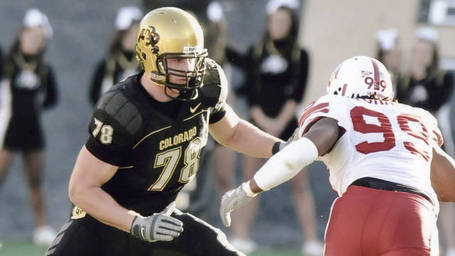 Right off the bat, Nate Solder brings impeccable character to the table.  He is an outstanding student - one of 16 to receive prestigious National Scholar-Athlete Awards from the National Football Foundation.  Graduating with a degree in biology, Solder displays an even-keel personality and is well-liked by teammates and coaches.  Solder earned Colorado's Special Teams Scout Award as a true freshman for his effort and commitment during practices.  He brings his book-smarts onto the gridiron, being one of the most intelligent football players in the country, just the kind the Pittsburgh Steelers like.  He's teachable and has unlimited upside.  The character factor cannot get shrugged aside, considering what the Steelers have been through this past year.  Their most valuable pitch-and-catch combo from the 2008 Super Bowl were both suspended, causing dispatch of one and major embarrassment with the other.  As long as they don't sacrifice quality, the Steelers can ill afford to take any risks with guys of blemished character.  Enter Nate Solder. 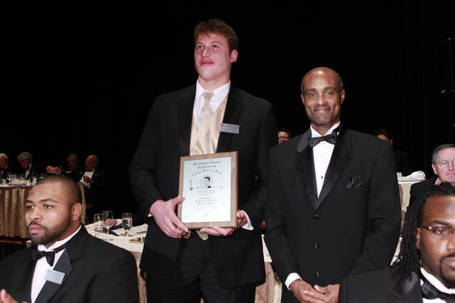 By the way, Solder also happens to be the best player available, for all you best-player-available purists.  Scouts Inc. rates him at 94, an elite rating that puts him in the company of only 15 players in the nation who rate 94 or higher.  For the Steelers to get a top 15 player at pick number 31 is a huge jackpot.  Add to that the fact the he satisfies a major need for the Steelers on the offensive line.  When you look at the total package of offensive tackles for the Steelers, the optimist might tell you that Starks and Colon will be back, Flozell has another year in him and Coach Sean Kugler can make Jonathan Scott better.  The pessimist will tell you that the group is shaky at best, aging, coming off severe injuries and mediocre to begin with.  The realist will tell you that drafting Solder, regardless of whether you see the glass half empty or half full, would upgrade the entire complexion of that unit with the addition of talent, youth and durability.

Let's take the need factor a step further here.  It may well be, according to every listing I've seen, that 14 players who are defensive lineman or outside backers, all putting massive pressure on offensive linemen, will be drafted before Pittsburgh even gets to the podium for the first time.  Add the impact second rounders, and it's conservative to say that two-thirds of NFL teams will significantly upgrade their defensive pressure by the end of April.  What better time than now to defend against that?  In a year when the Draft is loaded with defenders at the point of attack, wouldn't it be wise for a team like the Steelers to negate that attack?  Pittsburgh cannot afford to remain mediocre in the trenches when the rest of the league is upgrading on the opposite side of the ball.  When the Steelers drafted Ziggy Hood as a bookend lineman at the end of the first round two years ago, they infused youth into an aging line and gained margin of error that was desperately needed last season.  It is time now to draft a bookend lineman at the end of the first round on the other side of the ball to gain that same margin. 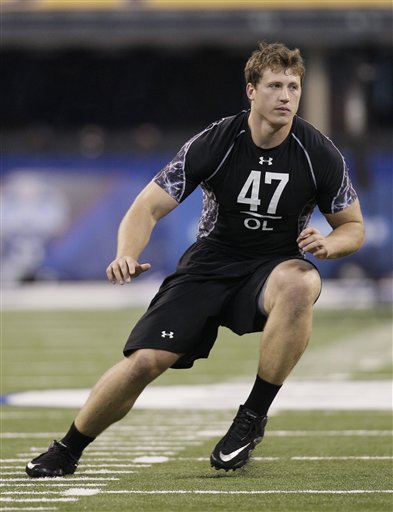 Speaking of durability, let's start there with the talent discussion of Solder.  He hasn't missed a game in college, starting reliably at left tackle for three years.  In fact, he never missed a snap.  He was first-team All-Big 12 in his junior and senior years.  He is above-average in every way that one can evaluate an offensive tackle.  He possesses good length (obviously at 6-8) and Solder's natural athleticism makes him light on his feet.  He can shuffle-and-mirror to stay in front of rushers, and can also move laterally to redirect and recover against double moves.  He started out as a tight end, so he is much more than just a "big guy."  His athleticism also gives him a quick first step, which puts him in solid position to gain the initial advantage.  Solder keeps his feet moving upon contact and his lateral quickness allows him to protect the edge, crucial against today's NFL defenders.  Solder is effective when progressing into the second level.  The guy can move in space, adjust on the move and cover up targets.

Solder is equally skilled as a run blocker and pass blocker.  For a guy his size (320 pounds), he uses power and leverage to an exceptional degree.  He can lower his hips when faced with a bull rush, but will need to step up to the real world of quick edge rushers in the NFL.  The combination of speed-power rushers is something Solder has not really seen in college.  He will need to listen to Sean Kugler's teaching techniques of shoulder angles and leverage, but really, it is exciting to think of what Solder can become with the addition of Kugler's tutelage, plus a little bulk added to his 6-8 frame.

Simply put, Kevin Colbert will do backflips up and down Carson Street if the Pittsburgh Steelers get an opportunity to draft Nate Solder.  Did I mention that he grades at 94, one of the top 15 college football players in the country?  And don't just take Scouts Inc.'s word for it.  Mike Mayock, Todd McShay and Mel Kiper all have Solder being drafted before the Steelers get to the podium.  Add the character element and the need factor, and we folks, have ourselves a no-brainer.  Hello Nathan and welcome aboard.