As I was perusing the web, I came across this interesting article about Oklahoma Free Safety Quinton Carter possibly being a perfect fit for the Pittsburgh Steelers. The 2011 Safety class is generally considered a pretty weak one with the exception of UCLA’s Rahim Moore. But Quinton Carter is almost as good from a physical talent perspective, and maybe even a better player in the right system. For the most part however, Carter's name has flown under the radar this draft season. As the article suggests, Quinton Carter is a great fit for the Steelers defensive scheme and should certainly be given some consideration by the front office in the second round of the 2011 NFL draft. 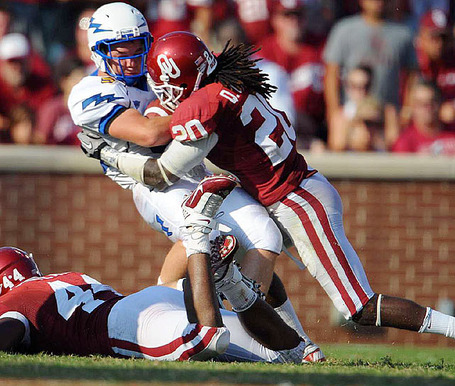 Pros: Quinton Carter might be the most physical Safety prospect in the 2011 draft. He plays a very aggressive style of defense and isn’t afraid to lay the wood on anybody whether it be in run support or some unsuspecting WR going over the middle and not paying attention. While his 40 time reads a little slow Carter plays fast enough to cover in man-to-man if needed but would be better served in a zone coverage scheme. At the combine Mike Mayock pointed out that Carter had very fluid hips. From a personal standpoint there may not be another player in the draft with a higher character than Carter’s. He’s already gotten a degree in Non-profit Organizational Studies and started his own non-profit charity in his hometown of Las Vegas, NV called SOUL (Serving Others with Unit and Leadership).

Cons: Sometimes he can be a little late to read and react when a Cornerback needs over-the-top help. His biggest draw might also be his biggest setback as he will all too often look for the knockout blow and end up tackling too high which will get him shook off by stronger opponents. In addition to that he’s likely to draw a few personal foul penalties for headhunting and other overly-aggressive behavior because of the way he plays. He was even kicked out of a few practices while at OU for being too aggressive. 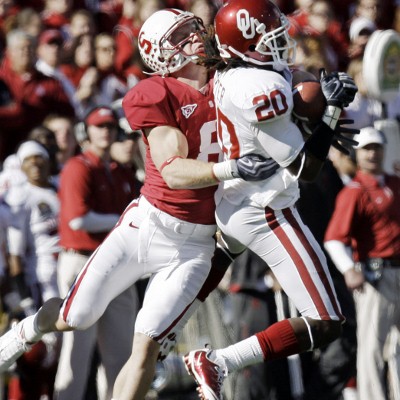 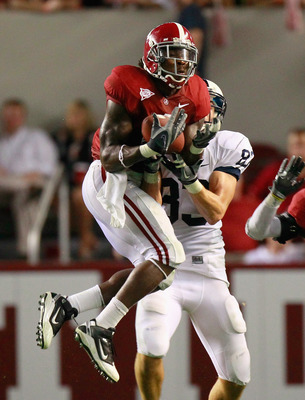 Draft Stock: As previously stated Quinton Carter is the second highest rated Safety in the 2011 draft class behind UCLA’s Rahim Moore. He carries a mid 2nd-early 3rd round grade and it’s unlikely that he’ll be selected before Moore who’s expected to go in the early to mid 2nd round. The earliest I would expect Carter to go is to Dallas at 40 but he could go to Houston at 42 (they cut Eugene Wilson), St. Louis at 47 (but only if they take Julio Jones in the 1st), Denver at 46, and Jacksonville at 49 (who desperately needs secondary help).  The farthest I could see him falling is too Houston in the 3rd round because he would be too valuable for them to pass up with their need at the position.

NFL Player Comparison: Pittsburgh Steelers Free Safety Ryan Clark
Quinton Carter is basically a more athletic version of Ryan Clark. They both play a very physical style of defense which earns them respect from the fans but jeers of being a dirty player from opponents, and they both have a propensity for laying people out and drawing penalties for it.

Final Word: Personally I feel that if the Steelers are going to draft a Free Safety I would prefer them to take Rahim Moore. I would just love to have a ballhawk of Moore’s talents to play Centerfield. But what I want is not necessarily what the Steelers Front Office would prefer. Quinton Carter just fits the mold of what the Steelers like in a defender a lot better. He’s Ryan Clark 2.0 and with Clark turning 32 years old this upcoming season and his skills starting to erode it would make sense to draft his replacement now. I know he doesn’t fill an immediate need but as we’ve gone over on multiple occasions the Steelers do not draft based on immediate need but rather on talent, as long as that talent will fill as need at some point in the near future. 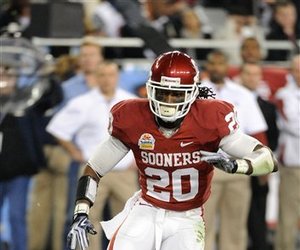 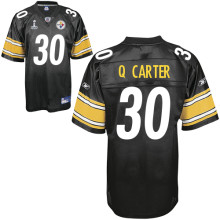