One Sunday In November

Share All sharing options for: One Sunday In November

Please note: this post is the the next installation in the great series written by Andrew Friedman, aka 5020. Many thanks to him for the trips down memory lane. - Michael B. -

In 1983 the Rooney family and Head Coach Chuck Noll had a huge decision to make. Terry Bradshaw though getting up in years was showing no signs of slowing down. He had had a super season in 1982 during a strike shortened year. As 1982 came to an end and the Steelers lost a playoff game to San Diego in a 31-28 shootout two things became clear. The Steel Curtain was gray and the strength of the Pittsburgh Steelers rested in the arm of QB Terry Bradshaw. The Curtain had closed on Joe Greene and some of the stars had started to retire. The Rooney's felt Bradshaw had another 3-5 years left in the tank. The problem with the Steelers started on defense. And just as with Chuck Noll's first draft pick in 1969 the Steelers were out to change the direction of the defense. The 3/4 defense would be the wave of the future. That would call for a big mean stopper in the middle of that defense.

The 1983 draft featured a bunch of pretty good future QBs. Three would be Hall caliber. John Elway went first. Todd Blackledge went 7th to KC. Jim Kelly went 14th. When USC Safety Joey Browner went 19th to the Minnesota Vikings and the Chargers chose RB Gary Anderson at pick 20 the Pittsburgh Steelers were on the clock. Hometown boy and University of Pittsburgh QB Dan Marino was available and there to be had with the 21st pick in the 1983 NFL draft. Rumor has it Marino or one of his minions begged the Rooney's to draft "Oakland" Dan Marino. At the Dapper Dan banquet in Pittsburgh month's before the draft Marino approached Art Rooney and told them how much he burned to be a Pittsburgh Steeler. By growing up in the Oakland section of Pittsburgh and playing ball at Pitt, also in Oakland, Marino had black and gold blood in his veins as you or I. Still rumors swirled around Pittsburgh in regards to Marino. Was he the party animal of Oakland? Was he really a regular at Peter's Pub, Zelda's Greenhouse and The Sanctuary? Was he using illicit mind altering substances? Why had he never won the "big game" at Pitt?

At 33-3 over 3 years, Marino had always found a way to miss the NCAA Championship whether by Bowl loss or getting upset by Penn State. At the end of the day, these rumors and questions combined with the Steelers confidence in their present QB position and a desperate need on defense led the Steelers to make their choice at 21. Gabriel Rivera from Texas Tech was the Steelers man at #21. Senor Sack as he was called was the quickest lineman to come out of college that year and was a beast, pure and simple. Marino fell to the Dolphins at 27.

The Steelers did not know it yet, but Terry Bradshaw had gone to Louisiana seeking the opinion of a back woods surgeon. Bradshaw had been suffering from pain in his elbow and had met with Steelers doctors. Bradshaw's age, the complications of elbow surgery at the time along with rehab time had convinced Steelers doctors that Bradshaw did not need surgery and would never make it back in time for the 1983 season if he did. With the clock ticking on Bradshaw's career it seemed like an imprudent move that would sacrifice some of Bradshaw's limited time left in the NFL. Bradshaw secretly disagreed and went south for surgery. When the 1983 season started, Terry Bradshaw was still recovering from an elbow surgery that would end his career. The Steelers didn't have their Super Bowl MVP QB to lead them anymore. What they did have in 1983 was an ever present ferocious defense led by behemoth rookie Gabe Rivera in the middle.

Seven games into the season the Steelers were 5-2 on the way to a high water mark of 9-2. The Steelers were led by the defense. A Bob Kohrs safety at Green Bay helped the Steelers hold off the Packers at Lambeau in week 2. In week 4 a Bryan Hinkle INT TD return helped the Steelers turn back the Oilers at Houston. In week 6 the defense registered 3 TDs as the surging Steelers beat Cincinnati on the road 24-14. Two more defensive TDs in a week 7 thrashing of the Browns cast the Steelers 1983 dye. Led by back up Cliff Stoudt, the Steelers would play a conservative game (even by Chuck Noll standards) and wait for a mistake by the opposition. When an opposing QB made a mistake under great duress the defense would capitalize and the Steelers would run to victory. Scoring by the likes of defenders Bob Kohrs, Harvey Clayton, Mike Merriweather and Greg Best aren't happenstance. Defensive scoring starts up front. And the pressure put on opposing QBs by the defensive front was the catalyst. Who was the straw that stirred the Steelers drink? That was Gabe Rivera. After a slow start out of Latrobe, Rivera was coming on strong. Defensive coordinators were having to game plan for the large quick rookie. Rivera starting at Nose took up 2 and 3 blockers on every play. Usually he pushed a Center, a Guard and a Running Back all the way into the pocket forcing the QB to run, throw or sit. Rivera had 2 sacks through 6 games but that doesn't tell the story of what was happening to the Steelers defense. It was almost as if it was 1976 all over again. Except Terry Bradshaw was not the QB anymore. Cliff Stoudt was. 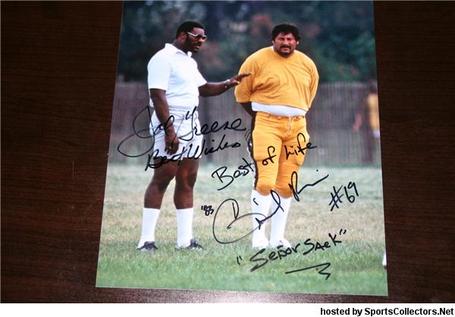 The Steelers were coming off of a huge 44-17 win against the Cleveland Browns at Pittsburgh. The Steelers were preparing to head to Seattle to play the Dave Kreig led Seahawks. October would soon turn to November. It was the day before the Steelers would leave for the North West. It was a dark rainy October evening in the Pittsburgh suburb of Ross Township. It was October 20 1983. Rivera who had been drinking was speeding down Babcock Blvd in a 280Z (how he fit in it I'll never know) without a seat belt. The car hit a slick spot and spun out of control. The almost 300 pound Rivera was ejected out of the back window in the crash. He shattered his spine and was paralyzed from the neck down. There would be no more Steeler Sunday's for young Gabe Rivera. There would be no Sunday's in November for Rivera or ever after. The game he played on October 16 1983 would be his last.

Without Rivera in the middle the defense was still stellar. But what offensive coordinators figured out was that the Steelers QB Cliff was a stiff. At 9-2 with the Steelers on top of the league a change was made in opponent game planning. The opposition began to sit on the football. A punt is better than a sack, INT or defensive TD. As the opponent offense waited out the Steelers defense, Cliff Stoudt was forced to do more to score points. What he did was make mistake after mistake. A Cliff Stoudt led offense was a stiff drought to the point total of the Steelers. 9-2 became 9-5. At New York Shea Stadium Terry Bradshaw would somehow lead the Steelers to one more victory and a playoff berth on a wing and a prayer before running off the field grimacing and holding his elbow. For Terry Bradshaw, after 13 years, his long and storied career was over. For Gabe Rivera it was all over 6 games after it started.

There but for the grace of GOD go Ben Roethlisberger after his horrific crash. It was what scared me so much after reading the news of Ben's wreck. Ben was lucky. Gabe? Not as much. "I remember the doctors didn't know my shoulder blade was broken in half until a few days later when I could talk again." Rivera said in an interview in the Pittsburgh Tribune. "I asked them why it hurt there" he continued "and that's when they realized it was broken." Rivera made a return to Three Rivers Stadium one Sunday in November 2000. It was there that his wife wheeled the once 300 pound Rivera to mid field in a wheel chair. Along with Larry Brown, JT Thomas and Bryan Hinkle he was an honorary captain for the Steelers and participated in the coin flip. After the flip his wife wheeled him to the sideline with Rivera smiling the entire way. It was Gabe Rivera's one Sunday in November.